Il Paradiso is a 1937 Montecaran drama film set during the Senrian-Xiaodongese War. It tells the story of an illicit relationship between a married Senrian diplomat and a Montecaran woman, and deals with themes of personal and national loyalties, betrayal, and intrigue.

The film opens in the spring of 1931. As the Senrian-Xiaodongese War rages far away, Montecara is booming. It is packed with spies and sailors on liberty, and its nightlife scene is legendary.

Diplomat Kizuurou Sugihara is stationed in Montecara as a military attaché at the Senrian embassy. He has brought along his wife and their young son. After work one evening, he and his colleagues visit a cabaret, Il Paradiso, where he is enchanted by one of the dancers, a Montecaran woman named Vera. Drunk and urged on by his friends, he orders a bottle of champagne to be sent to her dressing room along with his personal card.

Sugihara regrets his risky behavior but cannot stop thinking about Vera. He returns to the cabaret alone and finds her, striking up a conversation and revealing that it was his gift the other night.

Vera appears interested but tells her dancer friend that she only wants to tease her new admirer and possibly get some money from him. Nevertheless, she phones him late one night and, telling his wife that it is urgent war business, he meets her at a hotel bar. They rent a room and have sex.

The affair continues for months while news of atrocities committed by the Xiao military against Senrian civilians shocks the world. Sugihara splits his time between the embassy, where he is responsible for monitoring traffic in the Port of Montecara, and evenings at Il Paradiso followed by late-night trysts with Vera.

Meanwhile, the club owner has taken notice of the pair's closeness. He tries to persuade Vera to give him information that Ran leaks. Vera insists she has no interest in politics, but she wavers when he offers her a large sum of money in exchange for anything of value that she knows. Unbeknownst to Vera, he has been contacted by Xiao intelligence and offered money in exchange for information gleaned by the dancers.

Sugihara's wife confronts him about the long hours he is working and the uncertainty of the family's future. He assures her that she has nothing to worry about.

At their next tryst, Vera reveals that she is pregnant with his child. They both acknowledge that the pregnancy will make her a pariah and that it will be found out that he is the father when the baby is born and its mixed race is discovered. He gives her money for an abortion, which she refuses.

Sugihara finds out at work that a Senrian cruiser has been sunk with all hands lost. That night, a birthday party for the club owner takes place at Il Paradiso, and Sugihara stops in to see Vera dance. She sees him in the crowd and calls him backstage after her act, where she confesses that she has had the abortion, which she has paid for with money earned by passing on the valuable information that he slipped during their trysts. Overwhelmed by the guilt of knowing that he is responsible for hundreds of deaths, he staggers home and looks at his sleeping wife and son, then shoots himself with his pistol. 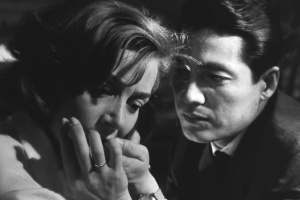 Il Paradiso was both a scandal and a sensation when it premiered at the first Montecara Film Festival, where it won the Béco aùreo for best film. It broke all box-office records for a Montecaran film, and its serious depiction of an adulterous interracial relationship is still considered shocking in many parts of the world today.

In the intervening decades, Il Paradiso has acquired a reputation as one of the finest films of the early 20th century and is considered a landmark for its pioneering cinematography, noir style, scandalous plot, and realistic acting.

Retrieved from "https://iiwiki.us/mediawiki/index.php?title=Il_Paradiso&oldid=404288"
Categories:
Hidden category:
This page was last edited on 22 September 2021, at 16:27.
Privacy policy
About IIWiki
Disclaimers