The Port of Montecara (Montecaran: Pòrt de Montecara) is the cargo, ferry, and cruise terminal serving the city-state of Montecara. A port city since antiquity, Montecara relies so heavily on its port that its history has been molded by the ships, goods, and people that have passed through its docks and wharves.

Although the port was for millennia primarily important for the import and export of goods, passenger traffic has overtaken cargo in importance over the last several decades. Montecara has become one of the world's most popular cruise destinations, with several cruise ships coming and going nearly every day. The city-state's location at the narrowest point between Euclea and Coius also makes it a crucial ferry destination, with millions of passengers starting, ending, or continuing their journeys through the port every year. 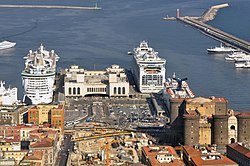 A cruise ship in port

Ferries are categorized as sea vessels intended for transportation rather than entertainment, separating them from cruise ships.

Retrieved from "https://iiwiki.us/mediawiki/index.php?title=Port_of_Montecara&oldid=208286"
Category:
Hidden category:
This page was last edited on 19 May 2020, at 05:39.
Privacy policy
About IIWiki
Disclaimers