The Montecara Film Festival (Montecaran: Fèsta Montecarà di Çìnema) is an annual international film festival held in Montecara. It features premieres of films from all genres, including documentaries, made across the world. Each participating nation is allowed to submit one film for consideration for the festival's grand prize, the Béco aùreo (Golden Goat). Films must have been completed in the preceding 12 months and make their premiere at the festival to be eligible for screening. It takes place each year at the Çinematèca di Stado. 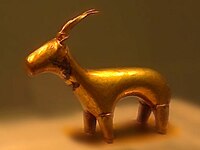 The weeklong festival takes usually takes place in September or October. Attendance is by invitation only.

The opening ceremony, held at sunset on the first night, is a black-tie event with a red carpet known for its mobs of paparazzi. Couturiers, jewelers, parfumiers, and luxury shoemakers compete with each other to outfit the year's biggest stars, who pause for photographs as they climb the grand staircase into the Çinematèca. The ceremony itself runs approximately one hour and is simultaneously broadcast on huge public screens in Montecara and in theaters around the world. It traditionally opens with the introduction of that year's jury by the Patron of the Çinematèca followed by the entrance, usually to great applause, of the director and cast of the year’s films. The Patron makes a speech, usually about the importance of cinema in some regard, before a musical performance that usually features a song from one of the year's films. The Secretary of State, accompanied by the Secretary of Education and Culture, then comes on stage to officially declare the festival open. The festival's first screening immediately follows.

Films are screened each afternoon and evening of the festival, and there at least one reception or party each night. These gatherings are legendary for their wild antics and great indulgence, as well as for being a rare opportunity for a large portion of the world's great filmmakers and actors to rub elbows. Luxury brands in a range of industries including alcohol, tobacco, automobiles, and aviation sponsor these events, in recent years handing out gift bags that have reached astronomical values.

An actress is photographed by paparazzi at the 1980 Festival

The last night of the festival features the awards ceremony, where the Béco aùreo, the festival's grand prize, is awarded by the Patron of the Çinematèca di Stado to that year's best film. The physical prize is a golden statuette of a goat, Montecara's unofficial national animal. The jury is composed of directors, actors, writers, and other filmmakers associated with past winners of the prize.

Films awarded the Béco aùreo tend to be highly sought-after by distribution companies, many representatives of which are always attendance. Winning the prize is seen as one of the greatest financial blessings an artistic film can achieve, as it all but guarantees that the film will see a wide release and very likely turn a profit.

Retrieved from "https://iiwiki.us/mediawiki/index.php?title=Montecara_Film_Festival&oldid=254451"
Categories:
Hidden category:
This page was last edited on 26 September 2020, at 17:19.
Privacy policy
About IIWiki
Disclaimers