James V (Born; James May Ovenden Bientot; 25 September 1895 - 12 September 1951) was King of Angland and leader of the Anglish Empire from 1929 until his death in 1951. Born into the House of Bientot, James was the eldest son of Oliver I and Nieve Brennon of Ledecestershire. He became Crown Prince upon his birth. As a young man he was educated at the Anglish Naval Academy School. During the First World War he and his family were evacuated to Charmelcia as Retoria was bombed by the Imperial League. In 1920 he married Flora Macek and they had three boys; William, George and Harrison. James became king upon the death of his father in early 1929. During the reign of James V Anglish society changed rapidly, the welfare state expanded and as a consequence women entered the work space in the 1960s. Due to rapid modernisation toward the end of his reign and the end of the colonial era demands were brought on James to become a constitutional monarch. James V died in September 1951 leaving the throne to his eldest son, William II.

The Kraloria Estate, where James was born.

Prince James was born on September the 25th 1895 Kraloria Estate, the Royal Family's estate in Dhuches, Charmelcia, during the reign of his father Oliver I. He was born to Oliver Bientot, son of previous king Paul II. His mother was Nieve Brennon, a member of the Brennon Family of Ledecestershire and descendent of the Sletharine royal family.

He was baptised a month after his birth, in October 1895, at the Stoneleigh Chapel in Retoria. The young prince had 18 godparents, including Lord Pierre Monroe of Vermand and Prince William McDonough of Charmelcia.

James' only sibling, Anne, was born a year after James in 1896. The family moved around during James' early years between residences in Charmelcia, Leamingshire and Retoria. They had a summer residence in Cornkien where the family spent a lot of the summers in James' early life, with his cousins and younger sister. When aged 10 James was made Duke of Leamingshire, one of the largest and most important Anglish counties and historic regions within the Midlands. 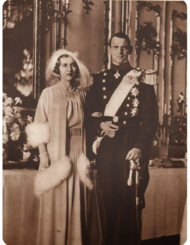 Prince James and Lady Flora Macek during their wedding, 1920.

James' parents wanted his wedding to be arranged, presenting him with Duchess Maria Nikolaevna of Slethar, however the marriage did not go through due to the two not getting along. After this, his parents had him arranged to Duchess Flora Macek of Vermand. They became engaged in 1919 and got married in the Spring of 1920 at the Eastminster Chapel, Retoria. They were related in several ways, both being descendants of Leopold IV of Vermand and Stephen VI of Deselaria. Their wedding was one of the greatest media events during the 1920s, and among guests to their wedding include world leaders of the time and political figures.

Following their wedding, the newly wed couple recieved James II's Palace at Ryton Palace in Ryton County as their secondary residence and Grasston Palace in Cornkien as a summer palace.

Their three sons are:

James assumed the regnal name "James V" to emphasise the strong history of kings with that name, as well as wishing to keep his birth name into his royal ascension. The beginning of James V's reign was shrouded in questions taken up by his predecessor, his father who passed away in early 1929, who made controversial decisions for the Anglish Empire, especially during the First World War. His death was also looked upon unfavourably by some, with alcoholism being associated with his passing which is seen as against Anglish Royal culture.

James V's coronation took place at Eastminster Abbey on the 30th June 1929, only months after his fathers passing as in tradition. However in a break of tradition, his mother attended the ceremony in a show of support for her son. There was a Durbar held in Kuthra which was attended by an estimated 180,000 people. As well as this, celebrations were held for the kings coronation throughout the Anglish Empire. However the coronation wasn't as well recieved in certain areas of the empire, with the rising anti-colonialist movement gaining ground in the decade of his coronation. Rising foreign nationalism made the welcome that the royal party would have received likely to be muted at best, and a prolonged absence from Britain would have been undesirable in the tense period before the Second World War. In the months following his coronation, three overseas territorial visits where made to some of Angland's closest allies, including Yerezh, Moriora and the islands of Kasai as well as much of Atusia.

The growing likelihood of a second conflict occurring in Parthenia dominated his early reign. The king was bound by constitution to support Prime-Minister Neville Durden's appeasement policy for the leader of the Eisen Rijk.