This article is about the metropolitan Angland. For the sovereign state, see Anglish Realm.

The Great Kingdom of Angland, otherwise simply referred to as Angland or Anglia, is a country in eastern Parthenia. It is bordered by Charmelcia to the north and Vermand to the west. It is the most populous and politically central constituent of the Anglish Realm, a sovereign state which includes territories such as Barbodia and the South Bagel Islands. Mainland Angland is located at the end of the Anglican Peninsula and surrounded by the Merillian Ocean.

Spanning a total area of 1,043,435.71 km^2, it consists of the majority of the Anglican Peninsula as well as Cornkien in the south. Anglands geography is consistently flat, arable land, sandy coasts and temperate climate. Southern Angland, around the Cornkien area is considerably warmer, comparable to the climate of Vetullia. As of the 2020 General Census they have a population of 49.88 million people of which around 9 million live in the city of Retoria. Angland exercises hegemony with the Anglish Realm, devolving power to it's members.

The name "Angland" is derived from the Anglican people group who first settled the peninsula in the 1100s, arriving from further west in Eisenland. "Angland" simply means "Land of the Anglicans", with the name evolving overtime into "Angland". The Anglicans originate from the Anglian Lowlands of Deseleria. 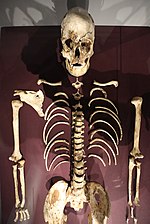 The Wensley Man, the earliest found human remains on the Anglican Peninsula.

Angland was the first nation in Parthenia to be settled by humans during the Great Hominid Migration from Atusia and the east. Despite this, humans are thought to have kept travelling instead of stopping in Angland for any long periods, with little evidence of settlement dating back to before 40,000 years ago. By the end of the region's prehistoric period the peninsula was inhabited by a culture which eventually evolved into Celts, comprising Celtic Anglica and Celtic Charmelcia.

The Remillian conquest of the peninsula began in 49 AD, and began a ruling of Angland that lasted for over three centuries. During this time many grand Remillian structures where built all over the peninsula, notably in places such as Baths and Retoria which still have notable Remillian influence into modern day. Despite this, upon the collapse of the Remillian Empire in 301 CE the Anglican Peninsula was invaded by Germanic Anglo-Deselerian as well as Kellins from the Lokournan peninsula to the north of Angland. Despite this, due to the technological advantages of the Anglo-Deselerian people the Kellins were reduced to Cornkien, where they eventually became the Cornkien ethnic group, as well as to Charmelcia where they became a minority group to the celts in the region. A majority of the land settled by the Anglo-Deselerians became the later Kingdom of Angland. Following this, the Gaelic speaking Celts united with the Picts to form the earliest Kingdom of Charmelcia in the 8th century.

In 1089, Angland invaded neighbouring Vermand and won a great victory in the land, establishing a monarchy in the region that came to be Hartfordland, known as Hartf'rdladet. This region became an early vassal state for Angland, located within former Vermandan lands and in a region split ethnically between Anglish speakers and Vermandan. After conquering Vermand for the first time, they shared feudalism with the state as well as with Charmelcia. Subsequent medieval kings made attempts to annex Vermand and Charmelcia, only being successful with the latter.

Angland soon after, due to it's involvement with Vermand and monarchic links to the crown, assisted with the Vermandan-Eisen War which they were victorious. Due to the rulership of King Louis II (A leader of heavy Vermandan descent) a period of religious instability began during the 1500s resulting from the introduction of Protestant state churches in the country. For a period the vassal state of Hartfordland was encorparated fully into the Kingdom of Angland as well as the previously independent region of Cornkien.

The extent of the Anglo-Vermacian Union, 1607.

In 1601, Vermand and Angland were temporarily united in the Anglo-Vermacian Union set up by King Arthur I, who had claim to both the crown of Angland and Vermand. The crown court was moved to Beaumont, Vermand, a move which became unpopular amongst the Anglican populations. Despite this each country nevertheless remained a separate political entity and retained its separate political, legal, and religious institutions.

In the mid-17th century Angland had a piracy crisis, with Anglish sailors being involved in acts of piracy all across the southern coast of Parthenia and across the Aurean Sea. Piracy was fought against by the first Anglish Queen, Anastashia I, who notably displayed the corpses of capture pirates along the River Avonia in the capital, Retoria. In the year 1673 the Anglo-Vermacian Union collapsed following the War of the Poppies. Despite this collapse, the Angles came out of the War of the Poppies in a much stronger position than their Vermandan neighbours with the economy still thriving and a powerful military under the respected King Robert IV.

In 1690 Robert passed away and the throne went to his eldest son, Eric, first of his name, who became known as Eric the Harsh due to his strange sense of brutality and influence. He caused uprising within the capital Retoria and was poisoned at his own wedding aged only 17. This lead to his younger brother Tommen taking the throne, aged only 12. Due to his young age a majority of Angland was ruled by a council, notably including grandfather Frederick Ecclestark and Amalric Melisande who was the first foreign advisor in Angland being from Yerezh. Many in the nation were unhappy with the rulership of the young king, seeing him as a weak leader. This lead to the uprising in the north, with Lord Robert Graff being proclaimed as the king in the north, with independence being stated by the northern states. This lead to the beginning of the Anglish Civil War as the north went to war with the south to proclaim their independence and place House Graff onto the throne. After a war that lasted only 2 years, Retoria was sacked by northern forces and House Graff took power over the Anglish throne.