Kuye is a port city in Emmiria. It is located in the northeast corner of the nation on the shore of the North Toyana Ocean. It has a population of over 6.3 million, making it the third largest city in Emmiria after Rhaga and Hazarabad. It is also one of the largest cities on the continent of Adula and one of the largest cities in the world. It is home to many international embassies, companies, and conferences that attract a lot of diplomacy and business. A "party capital" in the generally reserved culture of the Islamic world and East Adula, it has a lively nightlife and 24-hour culture. Kuye University is the nation's second largest university and one of the largest in the world by enrollment with over 100,000 students.

Kuye is one of the oldest continuously inhabited cities in the world, with its history being dated back to the early 200s. It saw conquests by the Emmirians, Quetanans, and the Skithans, but ultimately was annexed by Emmiria during the 1983 conflict. Since then, it has been labeled as a major international city through its port's economic benefits and the epicenter of many organizations such as Air Emmiria, Iozzby, and E1TV. 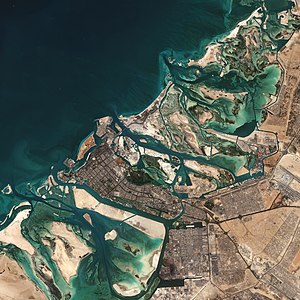 Kuye is located on the northeastern coast of Emmiria along the Toyana Ocean. It is on an island less than 250 metres (820 ft) from the mainland and is joined to the mainland by the Amiri and Zuhair Bridges. Kuye lies on land that used to be sand dunes and as such has relatively poor soil fertility. The land has been largely flattened and has no important gradients; its most notable geographical features are bluffs above the Toyana coastline and the Jiyaan River mouth.

Kuye has a Köppen climate classification Csa and enjoys plenty of sunshine throughout the year. Most precipitation falls in the form of rain between the months of May and September, with intervening dry summers. The average annual temperature is 20.9 °C (69.6 °F), and the average sea temperature is 18–20 °C (64–68 °F) during the winter, and 24–29 °C (75–84 °F) during the summer. The city averages 528 millimeters (20.8 in) of precipitation annually.

Summers in Kuye last about seven months, from October to June. February, the warmest month, averages a high of 30.6 °C (87.1 °F), and a low of 25 °C (77 °F). The high relative humidity due to the location of the city by the Toyana Sea, in a combination with the high temperatures, creates a thermal discomfort during the summer. Summer low temperatures in Kuye seldom drop below 20 °C (68 °F).

Winters are mild and wet, with most of the annual precipitation falling within the months of July, August and September as intense rainfall and thunderstorms. In July, the coolest month, the average maximum temperature is 17.6 °C (63.7 °F), the minimum temperature averages 10.2 °C (50.4 °F). During the coldest days of winter, temperatures may vary between 8 °C (46 °F) and 12 °C (54 °F). Both freezing temperatures and snowfall are extremely rare in the city.

Kuye is divided into dozens of districts that have been produced and expanded over its long history.

Since the 1980s, major restoration and gentrification projects have been implemented in southern Kuye. City planners beginning in 2001 reworked old Skithan plans for the Burki neighborhood from the 1920s, adding green areas, pedestrian malls, and housing. The municipality invested two million shekels in the project. The goal was to make Burki the entertainment district of the city, and attract artists and young professionals to the neighborhood. Indeed, street artists, such as Paka, installation artists such as Ismaeel al-Niazi, and many others made the upbeat neighborhood their home base. Burki is now known as a hip, "cool" place to be in Kuye with coffeehouses, markets, bars, galleries and parties.

Retrieved from "https://iiwiki.us/mediawiki/index.php?title=Kuye&oldid=361027"
Categories:
Hidden categories:
This page was last edited on 17 June 2021, at 20:00.
Privacy policy
About IIWiki
Disclaimers