Iearth, also known as Earth or the World, is the fifth planet from the Sun in the Estrella System. It is the only planet in the cosmos known to accomodate life. Scientific analysis generally concludes that Iearth developed over 4 billion years ago. The Iearth rotates around the Sun in 365 and ¼ days, a period commonly accepted as a year. Roughly two-thirds of the surface is covered by the ocean, while the remaining third is land. Active tectonic plates interact with each other to produce mountain ranges, volcanoes and earthquakes. The atmosphere consists of oxygen and nitrogen, and water vapor in the atmosphere forms clouds that cover most of the planet. Greenhouse gases in the atmosphere like carbon dioxide (CO2) trap a part of the energy from the Sun close to the surface.

Humans are the most influential lifeform on Iearth, with their influence being clearly seen on the planet's surface whether with reference to atmospheric composition, land cover, hydrology, light or the transportation and transformation of terrestrial material. The world contains a large variety of nations, where the developments of humanity can be seen through the many languages spoken, international organizations such as the Coalition of Crown Albatross, conflicts and warfare such as the World War, and the control and manipulation of other species, energy, and natural resources. According to the latest census date the Iearth is home to about 10 billion human beings. Humans depend on Iearth's biosphere and natural resources for their survival, but have increasingly impacted Iearth's environment. Today, humanity's impact on Iearth's climate, soils, waters, and ecosystems is unsustainable, threatening people's lives and causing widespread extinction of other life. Space exploration, seen in examples such as the Coalition Space Station and the Courage program, seek to expand humanity beyond the planet. 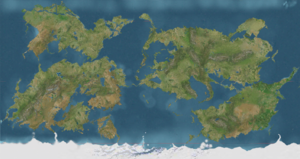 Iearth has an approx. total area of 131,750,000 km2 (50,870,000 sq mi). The land is divided into five continents. A continent is one of several very large landmasses of the world. Identified by convention rather than any strict criteria, we commonly regard up to four regions as continents. Ordered alphabetically, these continents are:

Iearth is a blue planet. The presence of water on its surface is unique in the Estrella system. The main bodies of water in the hydrosphere are the oceans.

The Moon is a relatively large, terrestrial, planet-like natural satellite, with a diameter about one-quarter of Iearth's. The gravitational attraction between Iearth and the Moon causes tides on Iearth. The same effect on the Moon has led to its tidal locking: its rotation period is the same as the time it takes to orbit Iearth. As a result, it always presents the same face to the planet. Viewed from Iearth, the Moon is just far enough away to have almost the same apparent-sized disk as the Sun. The angular size (or solid angle) of these two bodies match because, although the Sun's diameter is about 400 times as large as the Moon's, it is also 400 times more distant. This allows total and annular solar eclipses to occur on Iearth.

As of August 2021, there are 3,200 operational, human-made satellites orbiting Iearth. There are also inoperative satellites, including Sattelit-4, the oldest satellite currently in orbit (launched in 1953), and over 16,000 pieces of tracked space debris. Iearth's largest artificial satellite is the Coalition Space Station.

Herds of wildebeest in Peoratia

A planet's life forms inhabit ecosystems, whose total forms the biosphere. The biosphere is divided into a number of biomes, inhabited by broadly similar plants and animals. On land, biomes are separated primarily by differences in latitude, height above sea level and humidity. Terrestrial biomes lying within the Northern or Southern Circles, at high altitudes or in extremely arid areas are relatively barren of plant and animal life; species diversity reaches a peak in humid lowlands at equatorial latitudes.

The distance of Iearth from its sun, as well as its orbital eccentricity, rate of rotation, axial tilt, geological history, sustaining atmosphere, and magnetic field all contribute to the current habitable climatic conditions at the surface. The planet provides liquid water—an environment where complex organic molecules can assemble and interact, and sufficient energy to sustain metabolism. Plants can take up nutrients from the atmosphere, soils and water. These nutrients are constantly recycled between different species. Extreme weather, such as tropical cyclones (including hurricanes and typhoons), occurs over most of the planet's surface and has a large impact on life in those areas. Many places are subject to earthquakes, landslides, tsunamis, volcanic eruptions, tornadoes, blizzards, floods, droughts, wildfires, and other calamities and disasters. Human impact is felt in many areas due to pollution of the air and water, acid rain, loss of vegetation (overgrazing, deforestation, desertification), loss of wildlife, species extinction, soil degradation, soil depletion and erosion. Human activities release greenhouse gases into the atmosphere which cause global warming, driving changes such as the melting of glaciers and ice sheets, a global rise in average sea levels, increased risk of drought and wildfires, and migration of species to colder areas.

The Headquarters of the Coalition of Crown Albatross in Tofino, Zian, Zamastan, is the primary complex that houses the Coalition's functions, though there are multiple other headquarter offices across the World. It is located in Embassy Row, the world's largest diplomatic functioning district. 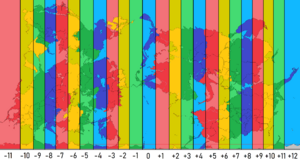 About 50% of Iearth is covered in water, with the remainder of of land also being roughly 90% uninhabitable due to mountains, desert, and ice caps. The northernmost permanently inhabited place in the world, at latitude 82°30'05" north, 817 kilometres (508 mi) from the North Pole, located at Recon Percilius Joint Research Station on Percilius Jacobeir Island in New Anea on the continent of Nortua. The southernmost is the Joint Antartique South Pole Station located almost exactly at the South Pole on the continent of Antartique.

Humanity has also extended its reach beyond the planet's surface. The Coalition Space Station is a scientific module built, maintained, and crewed by an international community of scientists and astronauts that orbits the planet. The Marri-1 launch in June 6th, 1962 put the first humans, Zamastanian astronauts Casey Giverston and Demarcus Free, into space. In 1970, a joint-Beleroskov and Drambenburgian rover was landed on the moon, and on June 3rd, 1972 the Zamastanian Blue Falcon 3 mission put astronauts John Bennett, Vincent Steward, and Edward Wood Chambers on the lunar surface. The Courage program is an international effort underway to colonize Eirus, the fourth planet in the solar system.

Humanity has divided the planet into timezones, which are areas that observes a uniform standard time for legal, commercial and social purposes. Time zones tend to follow the boundaries between countries and their subdivisions instead of strictly following longitude, because it is convenient for areas in frequent communication to keep the same time.

The planet has resources that have been exploited by humans. Those termed non-renewable resources, such as fossil fuels, are only replenished over geological timescales. Large deposits of fossil fuels are obtained from the planet's crust, consisting of coal, petroleum, and natural gas. These deposits are used by humans both for energy production and as feedstock for chemical production. Mineral ore bodies have also been formed within the crust through a process of ore genesis, resulting from actions of magmatism, erosion, and plate tectonics. These metals and other elements are extracted by mining, a process which often brings environmental and health damage.