Lavaria (Lavish: Lavária [laˈvaɾia]), officially the Kingdom of Lavaria (Lavish: Reino da Lavária), is a sovereign state and constitutional monarchy located in central Berea, right where the Siantric peninsula starts. Lavaria borders Dulebia to the north. With an area of NNN.NNN km2, Lavaria is the Xth largest country in Berea. In terms of population, Lavaria is the largest in Berea and the Xth in Aurorum at a population of 50,099,425. The capital is Cambra, while the seat of government and financial center is located in Aniarro. Other important urban areas of the country includes Boabela, Pania, Salona, Mesana and Guefa.

Through the marriage of Princess Sophia to King Maximilian I both monarchies were tied together and since then maintained a political relationship.

Lavaria is a parliamentary democracy and a constitutional monarchy, with King Alberto Salazar I as the head of state. It is a major developed country with the the world's XXth largest economy by nominal GDP. With a very high HDI (0,866), Lavaria is a fine country in numerous social aspects such as education, quality of life, healthcare and public safety.

Lavaria is the third-largest economy in Berea and the seventh-largest economy in the world by nominal GDP ($1,2 trillion). In the decades following the Great War and before the Lavish civil war, the administration of the northern regions of Lavaria leaned towards communist ideologies, seen that the level of poverty in those areas grew exponentially during the 1910s and 1920s. By 1931, a year before the Civil War, the unemployment rate was up to 17,4%. During that period, most of the nation’s biggest companies from the north were made statal. Important companies like COPEXN (Compania de Petróleo e Extração Natural), Bank of Lavaria (Banco da Lavária), CANAMA (Compania Nacional de Aço e Metalúrgica), and FAUP (Fábrica Automotiva Popular), were state-owned companies until 1945 after the reunification and a series of economic reforms that followed. The rather socialist government in northern Lavaria was able to lower the regional unemployment rates by almost 6%, though the extreme protectionist policies on exports and imports kept the regional economy from thriving. When the country reunified and the parliament was remodeled, the concept of an open market economy was brought back in, and most of the previous state-owned companies were privatized. In 1966, Lavaria changed its currency from the Ouro to the Lírio (£). The currency change elevated the country's economy, leading to a GDP increase of 10,3% between the years of 1968 and 1973. 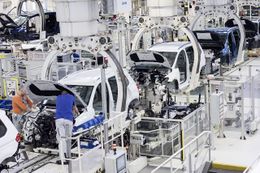 Assembly line of a VLGM factory in Villa Lobos, Aniarro, in 2019

Lavaria is one of the world's biggest exporters with $613,7 billion exported in 2010 and generated a comercial superavit of $150 billion. The service sector contributed with 68,3% of the GDP, the industry sector contributed with 30,1% and agriculture with 1,6%. Lavaria's top 5 biggest trading partners are Mascylla, Albeinland, Dulebia, Nanzhou and Kenlong. The majority of Lavish products are engineering, autovehicles, machinery, pharmaceuticals, and chemicals products. Lavaria is one of the biggest oil and natural gas producers in Cardia. Some of the most industrialized cities in Lavaria are Aniarro, Boabela, Bodã and Cambra.

Among the largest companies negociated in the world stock market, 5 out of the 50 most lucrative ones are based in Lavaria. The 10 largest companies are Villa Lobos GM (former FAUP), Ave Cia. Aérea, COPEXN, CANAMA, Bank of Lavaria, Auger, Polo Químico Thibaut Coupart, Martel CE, Bruno-Covillon and Rede Gama. Other notorious companies are ALBEV (Associação Lavariana de Bebidas e Vinhos), Credeve, Green Bank, Braga-Chandonnet Insurance, among many others that demonstrates the strenght of the Lavish economy worldwide. 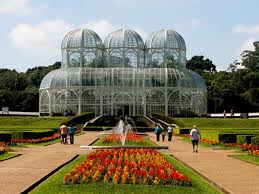 In the recent years, the toursim industry in Lavaria has increased due to the flourshing economy and internal investment. In 2012, the number of flights destinated to Lavaria increade by 63%. Since 2018, the tourism sector of the economy became the 5th most lucrative sector in the country. Every region of Lavaria has at least one international airport, with the biggest ones being located in Aniarro, Cambra, Boabela, Guefa and Balsas. Tourism in Lavaria is extremly diversified, going from mountanous regions to gold beaches with clear, warm waters.

Seasonal tourism is constant in Lavaria. The Serra Branca is a hub for tourists during the winter season. The National Grape and Wine Festival is a famous celebration held in Alto Alegre, province of Berganza, which celebrates the extense wine culture of the region. It's one of the most famous events in the country and it's called Festa da Uva, when lots of merrymaking, wine drinking, grapes and people animate the month of January, every two years. Located 78km away from Guefa, the city of Hortencias is also widely known for its lush nature and hesurian architercture. Hortencias is also part of the Pais do Vinho scenic tourist tour, which takes visitors to the most famous wineries of Lavaria. During summer, the southern coast attracts the most visitors. After the expansion of the Pania international airport, the city started to increasingly recieve thousands of visitors from around the world. Nearby beaches like the Cabo de São Mário do Sul, Praia das Caravelas and Praia das Dunas are some of the most frequently visited. The city of Balsas, in the autonomous region of Saint Hubert of the Lilacs, constantly holds summer musical events like the Ao Vivo Verão, every two years.

The big cities are also highly demanded for tourism. Aniarro and Boisbelle are famous for the urban atmosphere. Many museums and historical buildings can be found. The Museu Nacional da Guerra Continental, one of the biggest museums on the Continental War in the world, is located in Boabela. Cambra, however, is the biggest city to recieve the most amount of visitors due to its famous royal scenic tourist tour around the city. Guefa is another tourism hub, with the Jardim Botanico being the hotspot for visitors looking for a less crowded big city. 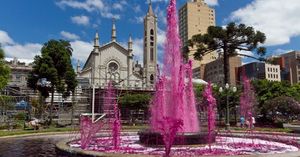 Wine fountain in Alto Alegre, also known as the national capital of wine.

The production of wine counts for over 26% of the lavish food and beverage exports. The country holds a deep wine culture, specially in the Serra Branca region. The biggest wine producer is the province of Berganza, followed by the provinces of Vinhal do Norte, Essandria and Sordia. Altogether, those 4 provinces produced over 84% of the wine produced for exports. Alto Alegre, in Berganza, is known as the national capital of wine, where most of the world renowned Lavish wines are from. Wines in Lavaria are named after the province they are from. The Berganza Wine has been considered multiple times by specialists as one of the best in the world.

Lavaria is the second biggest wine producer in Gaia, with 54.8 million hectolitres (M hl) produced in the year of 2019.

Retrieved from "https://iiwiki.us/mediawiki/index.php?title=Lavaria&oldid=277783"
Categories:
Hidden categories:
This page was last edited on 20 November 2020, at 18:07.
Privacy policy
About IIWiki
Disclaimers