Manak Cuzi was a Hardhi military officer and then politician who ascended to the throne during the Glorious Regeneration, of which he was the main architect. He ruled Hardhiara as its Equiveprim for 42 years, from 1949 until his death of old age in 1991. He has since then been given the posthumous title of "Eternal Equiveprim" as the cult of personality surrounding him continues to this day. His long rule was characterized by dictatorial practices and reactionary policies that reversed most of the reforms and modifications brought about by his predecessors. He notably brought back the Decimal Administration, nationalized most of the country's industrial sectors, enacted country-wide land reforms, led the rapid industrialization of the country through the use of economic planning, and ended democracy.

His "Regeneration" aimed at reversing what he had seen as the "systematic weakening of the state's institutions and organs" by recreating and modernizing the "traditional" Hardhi system of rulership. He ended all democratic institutions, closed the chambers of commerce, and took direct control over the economy. His bureaucratic approach to central planning was mitigated by the relative decentralization of said planning, with regional and provincial governors planning their own programs as long as they matched central directives.

Dissidents and opponents to his rule were systematically purged by his secret police, and his government also practiced deportations, forced relocalisations of communities judged to be "potential threats to National Security", and forced labour. Most markets that had managed to appear since the beginning of the century were closed, replaced by modernized "Magazinet" distributing rations of foods, clothes, and tools to the population.

One the international stage, Manak Cuzi became a close ally of Gerrit Hartnell and he signed the Kujkë Agreement with the Foresitter in 1955, a treaty that would be transformed the same year into the Mageiros League.

After his death, Manak Cuzi's body was enshrined at the Afër Qiellit Mausoleum, near Rihap. To this day, his mummified body continues to attract visitors on what has become a state sponsored pilgrimage and it is often publicly displayed during important events. All newly appointed ministers and regional governors travel to the Mausoleum to take the oath to the Nation and the Equiveprim over the Hardhiaran Flag, while under the watch of Manak Cuzi.

Manak Cuzi was born in 1898 in the town of Lunastasi, in the Region of Gjydiert, to the Lunë tribe. His father was an officer in the military attached to the Durvan' garrison, and his mother a teacher. His parents were from locally important families; his grandfather was a retired colonel and their tribe's leader, and his uncle was an important regional administrator. He spent his first years in this tribal environment, with its customs and values, before being sent to Durvan's middle school. He spent his adolescence under the care of his uncle, and then joined a military school to prepare him for the Officer Academy. In 1914, when he was 16 years old, he was conscripted into the military and served during the Continental War as a rifleman. He finished the war with the rank of Corporal and, given that he was now old enough, he immediately entered the Officer Academy of Kujkë on his Grandfather's recommendation.

The Hardhi were military involved in the Occupation of Hilmabreget after 1921 when it's army crossed the international border and occupied a number of strategic checkpoints to support the A-PEHNA. As a student-officer, Manak Cuzi took part in the operation with the rank of Lieutenant. After a small period serving in a mobile patrol, he was assigned to the Joint Forces, units made of a mix of Hardhi soldiers and Durqleri militias tasked with counter-insurgency missions. There he rose up to the rank of Captain and made friends among the Whikqur, a Durqleri tribe, and learned their language. Like other Joint Forces, Manak Cuzi's unit is accused of performing war crimes, specifically acting as an anti-Hilmaric death squad. In 1923, Manak's Unit participated as reinforcements in the Battle of Junio, the last bastion of Hilmaric resistance.

Following the Occupation, the Joint Forces were disbanded but Manak retained his rank of Captain. He then served on the Dulebian border, before being re-assigned to Hilmabreget. His knowledge of the Durqleri and ties to the Whikqur made him a prominent officer in the region, and one of the main instructors in charge of training a new generation of Durqleri officers fully integrated into the Hardhiara military structure. By 1935, he had reached the rank of colonel and had married the daughter of Rof Salmaq, a prominent Whikqur leader. 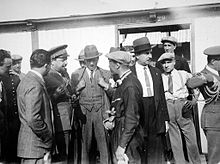 Manak Cuzi in military uniform at a public event near Junio

During his stay in Hilmabreget, was introduced to the Gjakvëllezër Adelthon. It's there that he would become friend with the Regional Governor of Hilmabreget at the time, as well as a regular participant in a number of circles animated by anti-liberal economists who promoted the idea of restructuring society and the nationalization of all lands as a way out of the economic degradation that not only afflicted Hadhiara but also the rest of the world. These economists notably took inspiration from the 'post-revolutions recovery" of Erdara when discussing the interest of an active interventionist government in the economy during times of recession.

In 1936, Manak Cuzi was appointed "Military advisor" of the Regional Government, as well as director of the new Military Academy of Junio. He became one of the most trusted advisor of the Governor and an influential figure in the region, advocating for extensive state spending on public works, education, and pensions as a way to boost the economy of the region. Pressures from Kujkë led to his removal from the office of advisor, even if he kept his position of Director where he continued to influence regional politics through his ties with the Durqleri tribes and the Gjakvëllezër Brotherhood. In 1939 he was promoted to the rank of General, but assigned to a battalion at the Dulebian border and had to abandon the Junio Military Academy. Kujkë hoped that this "exile" in a region where he had no friend or family would isolate him. Instead he and other Gjakvëllezër started to spread his image as a "Martyr", dismissed from his positions and sent into exile despite the success of his socio-economic plans. The publicity would serve him well.

In 1943, the Cathartic Empire was officially dissolved. The economic and political shock-waves sent by this event finished throwing Hardhiara into a full Recession. The previous liberal-minded government was dismissed by the Equiveprim under popular pressure, and court politics began to choose a new candidate for the position of Chancellor. With the help of his friends in the military and in the civil administration, plus the support of his family and other relations, Manak Cuzi managed to transform the public recognition he had gained in 1939 into political momentum. After a quick-succession of short-lived cabinets, Manak Cuzi was finally appointed to the Chancellery in 1944 and was honorably discharged from the Army, retaining his rank of general.

As head of the executive, Manak Cuzi gathered a cabinet of close friends and supporters from Hilmabreget and Gjydiert, as well as from the Capital. This "Provincial Clique" immediately began what they had already tried in Hilmabreget, but on a much larger scale. "Special Missions" were created to supervise public works in various regions, expanding railroads, highways, building new airports, and other "important infrastructures". Manak Cuzi also used loans to send grants to farmers and support the agriculture, and created networks of "social assistance" and "Social Cooperatives" , among other policies aimed at fighting against the Recession.

Through the careful use of his own network and public support, he was able to evince all of his opponents, but was stuck in a constant struggle with the Equiveprim on almost every bill or policy proposed by his Cabinet. In 1946 as it seemed like the Equiveprim would organize a military coup to oust Manak Cuzi, Cuzi managed to replace the units guarding Kujkë with units led by officers still loyal to him. Furthermore, multiple choke-points around the roads and highways leading to the Capital were suddenly occupied by tribal militias loyal to the Chancellor.

Throughout his Chancellorship, Manak Cuzi promoted in the state propaganda the idea that the Lunë tribe had ties to the old Dierriegër Dynasty. After 1946, it became clearer for everyone that the King and his Chancellor were in open warfare and violence between their partisans became more and more commons.

In 1947, the Equiveprim attempted to secretly abandon Kujkë and join General Aleks Iahashari and his army stationed in the Haydushki Region. The goal of this flight was to provide the Equiveprim with a greater freedom of action and personal security against his troublesome Chancellor, as well as giving the Loyalists the possibility to potentialy assault the Capital without fear of seeing the Monarch being used as an hostage. The mastermind of the operation was Ruçi Tanush, eldest son of the Equiveprim and Viceroy of Hardhiara. Unfortunately, Manak Cuzi was informed of the secret preparatives by his network of spies.

On the fateful day of December 17, 1947, the Royal family left the Palace in a secured cortege to visit an ongoing highway construction site. The visit had been approved by Manak Cuzi, and the royal family replaced the camera crew assigned with them with their own agents. They never went to the construction, instead leaving the Capital by the Eastern Exit of the Ring-Road in direction of Aleks Iahashari and his men. The Equiveprim however was unaware that Manik had already set his own plan into motion, and ordered the arrest of the loyalist general. Similarily, the men he had sent to meet the Royal cortege halfway through their travel was stopped by the secret police and law enforcement. When the Equiveprim reached the town of Krisha at 03:00 am the next morning, they were not greeted by the loyalists they had expected but by agents of the Secret Police. The Equiveprim was escorted back to Kujkë, while Ruçi Tanush was arrested.

The first months of 1948 were thus marked by the trials of both a General and of the Viceroy. They were accused of conspiring against the Nation and the Monarchy, of kidnapping the Equiveprim against his will, and of having planned a coup against the Chancellery. Aleks Iahashari and a number of his collaborators inside the military were executed once found guilty of high-treason. Ruçi Tanush was placed under house arrest until he was finally forced into suicide in August of the same year.

Viceroyship and Ascension to the Throne

With the death of Ruçi Tanush, Viceroy of Hardhiara and uncontested prince inheritor of the Equiveprimya, a succession crisis began over who would succeed him in the position of Viceroy, an almost guaranteed ticket to the Throne made all the more attractive by the advanced age of the Equiveprim. Manak Cuzi began seemingly uninterested in the opposition, instead playing the role of a potential "kingmaker", playing claimants against one another depending on the promises and gifts he received. It appears that he was not merely placing himself in the middle of the political chessboard, but was actually sending a message to the Equiveprim by making sure no clear inheritor could triumph. As it became evident, the monarch of Hardhiara and his Chancellor reached an agreement: Manak Cuzi would become the new Viceroy.

Strengthened by the title, Manak Cuzi disposed of the other outraged claimants one way or another, further demonstrating the weakness of the Sipër Dynasty. Cuzi's propaganda machine and secret services were pushed to their limits, but their dedicated work gave the Chancellor-Viceroy such unprecedented popularity and ubiquitous political presence that he was able to pressure the Equiveprim into abdicating the throne in his favour only after two months and without any contestation. The old monarch was then granted the Mayorship of Rihap, the "Southern Capital", and finally allowed to leave Kujkë two years after the failed Flight to Krisha. He would remain in this position until his death three years later, at 81 years old.