Jump to:navigation, search
This is a Gylian name. The surname is Caracciolo. This person is customarily referred to by the given name Maria.

Maria Caracciolo (Gylic transcription: Maria Karacolo; 1 January 1872 – 6 January 1952) was a Gylian socialite, model, arts patron, writer, and magazine editor active in Alscia. She was best-known as the founder and editor-in-chief of Risveglio Nazionale, one of Alscia's most influential political magazines. A tireless champion of nation-building and state-building, she was nicknamed "Madame Alscia" for her dedication to the "hurried province".

She went by "Griselda" in her youth, liking the connotations of the name, but felt in later life that the nickname "Selda" possessed insufficient gravitas, and chose to be known as "Maria Caracciolo" instead.

She attended primary and secondary school in Tivolo, a period in which she began her entry into Cacertian artistic and high society circles. She moved to Cesena in 1890, where she attended finishing school.

In Cesena, Maria gained fame as a muse and model to many artists. She was described as "tall and slender, with Abruzzese red hair", and was known for her "elusive combination of childlike innocence and soigné charm". She worked as a society columnist for a local newspaper, and became a celebrated hostess, socialite, and patron of the arts. Her socialite pursuits were aided by her marriage, which brought her a title of nobility as well.

She was an enthusiastic fencer and equestrian, and competed in tournaments during the 1890s–1900s. For the rest of her life, she remained an enthusiastic horse rider, and carried a blunt foil with her, which she would theatrically pull to make a point. These habits contributed to her eccentric reputation.

She wrote one novel, the semi-autobiographical Nadine Narska, which was published under a pseudonym in 1906. The novel garnered little attention and a few poor reviews. She was embarrassed by the failure and had all copies recalled and destroyed. It would be her only foray into fiction.

Despite her failure to establish herself as a novelist, her career as a society columnist was thriving. She developed a greater interest in politics and the arts, and cultivated close ties with the Gylian exile and Free Megelanese communities.

Maria supported Cacerta during the Cacerta-Xevden War, and moved to Alscia after is conclusion. She considered the establishment of Alscia the first step towards a Gylian revival and liberation, and was excited about it as a nation-building and state-building project.

She sought to provide the province with a solid theoretical underpinning for this project, and founded Risveglio Nazionale for this purpose. Over the next three decades, Risveglio Nazionale became one of the most influential magazines of Alscia, described variously as a "house organ of Donatellism" and by Margot Fontaine as "an audacious attempt to will une certaine idée de l'Alscia into existence".

Maria leveraged her connections as a socialite, muse, model, hostess, and arts patron in the service of the magazine. She secured contributions from Alscia's best journalists, academics, and artists (especially Tamara Łempicka and Pierre Brissaud). She had a talent for spotting and recruiting talent, and focused on the big picture, leaving her able colleagues to handle day-to-day administration.

She was primarily responsible for Risveglio Nazionale's mixture of intellectual theorising, campaigning journalism, serialised fiction, and lavish illustrations, which was the basis of its success.

As editor-in-chief, Maria strove to capture the "hurried province" in her magazine, and to cultivate a "republic of letters". She closely involved herself in all aspects of publication and worked energetically for long hours, at times exhausting her colleagues. She arrived at Risveglio Nazionale's office in full dress to set an example, inevitably carrying her umbrella and blunt foil, and impressed upon colleagues that the magazine had to represent the best of Alscia.

Politically, she was progressive, and a supporter of reform and social movements. She sought to make Risveglio Nazionale a national salon, hosting debates in print between the province's leading liberals, socialists, communists, conservatives, and radicals (the latter including anarchists).

Elisa Boland, a regular contributor, described Maria as instinctively quite elitist, but genuinely revolted by the existence of poverty and ignorance: "She threw Risveglio like a battering ram at every social question Alscia faced."

At its height, Risveglio Nazionale had a circulation of circa 500.000, and had great influence on public opinion. Maria was granted the title of Duchess by UOC in 1922. Historian Herta Schwamen writes that, between them, Maria, Donatella Rossetti, and Arlette Gaubert "came as close as one could to embodying Alscia in their person".

Nicknamed "Madame Alscia" for her tireless efforts on behalf of the province, one biographer remarked that Maria "modestly appointed herself the supreme arbiter of Alscianism", envisioning a progressive province of virtuous citizens that could eradicate corruption, poverty, and other social ills. Maria's commitment to the "hurried province" caused her politics to drift away from Gylian nationalism: she treated the Alscian Border War as a distraction from domestic development, and shifted gradually towards creating a Gylian state by simply having Alscia annex Xevden's territories and unify Gylians through Alscianisation. 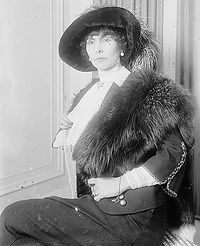 Maria's separation from the Alscian mainstream was made clear during the dissolution of the Cacertian Empire. In the Alscian sovereignty referendum, she campaigned for independence in personal union with Cacerta. Instead, voters overwhelmingly supported joining the Free Territories by 72,3% to 27,7%.

She attended the formal joining ceremony on 1 March 1939, at which Donatella declared the complete dissolution of the Alscian government. Risveglio Nazionale produced one final special issue dedicated to the transition, and was closed.

The dissolution of Alscia was a heavy blow to Maria. Having thrived on adulation and influence, she had to accept a reduced public profile. Most importantly, the loss of her adopted home left her "spiritually homeless". She was skeptical and critical of the Free Territories, believing them to be a doomed venture. Ideas of moving to Cacerta or Delkora came to naught, but served to illustrate her difficulties in starting over after 30 years as editor of Risveglio Nazionale.

She remained active as a writer and involved herself in various causes. She took part in communal assemblies, but was never selected as a delegate to the General Council or regional councils. She wrote her memoirs, published several books, pamphlets, and articles espousing her beliefs, and travelled the Free Territories to present her message to the public and debate political opponents.

Although a shrunken public figure, Maria still commanded respect. She was treated well by her anarchist opponents, who recalled her achievements as editor-in-chief of Risveglio Nazionale, and the way she had taken them seriously and given them exposure in the magazine. She was included in the honoured citizens list. During one debate, Adélaïde Raynault, the leader of the authoritarian left faction, admonished Maria's critics, remarking: "Madame Alscia is one of our parents. We owe her our pietas."

Maria appreciated her acceptance as an elder stateswoman. She remained a critic of the Free Territories for the rest of her life, but achieved a certain reconciliation. She wrote in 1948: "I remain impressed by the supreme seriousness and discipline the people show at communal assemblies … they may yet create the republic of letters."

Maria fell ill with cancer, and died on 6 January 1952, in a hospital in Etra.

Future health minister Régine Walras attended to a weakened Maria in her last moments. The two had a brief conversation in French: Maria asked "How is the nation?", to which Régine replied "The nation is at peace." Maria smiled and fell unconscious one last time, dying a few hours later.

Maria married Marino Brancaccio, a Cacertian nobleman, in 1892. They were married until his death in 1920. Their marriage was not intimate, but the two were good friends, and Marino supported his wife's career.

Maria practiced Sofianism, and identified as bisexual. She had several affairs throughout her life, including one with writer Anaïs Nin.

Retrieved from "https://iiwiki.us/mediawiki/index.php?title=Maria_Caracciolo&oldid=151300"
Category:
Hidden categories:
This page was last edited on 10 January 2020, at 08:26.
Privacy policy
About IIWiki
Disclaimers