A defining element of Gylian politics, communal assemblies are a significant component of cooperative democracy, and are constitutionally recognised as the "main organ of governance".

Communal assemblies trace their origins to the democratic developments of the Liúşai League, particularly its governing assemblies made up of the people of the community. When this development was interrupted by the Xevdenite conquest, glorification of the League's "democracy" played a part in the Gylian ascendancy, and the spread of anarchist ideals among Gylians. The province of Alscia, in the Cacertian Empire, notably experimented with direct democratic mechanisms, including popular initiatives, referendums, primary elections and recall elections.

Communal assemblies were established in the Free Territories as revolutionary councils at the local level. Workers' councils ran factories, rural collectives organised agriculture, and the communal assemblies governed the cities and villages directly. Councils coordinated regionally through regular congresses, and elected delegates to the General Council.

The anarchist journalist Luisa Braglia credited the communal assemblies with fostering "remarkable political discipline" among the Free Territories' residents. Not only could they participate directly in governance through meetings, referendums and initiatives, all elected positions were subject to immediate recall and imperative mandates. As the Liberation War continued, an increasing number of councils adopted compulsory voting measures to ensure high participation.

The communal assemblies' powers were preserved in the transition from the Free Territories to Gylias: the Constitution was drafted mainly by popular participation, and defined the assemblies as the "main organ of governance". Larger administrative entities were established primarily for coordination and management purposes, based on a fundamental principle of subsidiarity.

The communal assemblies underwent evolution during the Golden Revolution, including a shift towards sortition and the formation of various organisations and advisory councils that constituted the public component of cooperative democracy. The adoption of the Hermes Programme provided the main means for public involvement in decentralised planning, while the establishment of regional assemblies started in 1970 created an additional layer of coordination.

The growth and widespread adoption of ICT and the Internet strengthened the communal assemblies, by simplifying and modernising the process of involvement in governance and economic planning. Their primacy was reflected in various measures adopted since the 1980s that restrict the size of local and federal legislatures, to prevent them from usurping the prerogative of self-governance.

Communal assemblies are held weekly. The exact date varies among communities: some schedule them on Fridays to take advantage of market days, or in the weekend. Others may hold them on a weekday in the evening. Assemblies are organised at the community level, in villages and urban neighbourhoods, and generally observe a population limit of around 1.000 people.

Communal assemblies are open to all who wish to take part. Community members are expected to attend an assembly, and they are subject to Gylias' compulsory voting legislation to maximise turnout. To ensure adequate representation of Gylian demographics, anywhere between part and half of the assembly is chosen through sortition.

At the assembly, deliberations take place and decisions are made. Participants propose questions, motions and amendments, and vote on them. Proposals are accepted or rejected by simple majority, while proposals with multiple motions are subject to exhaustive ballots.

Various methods of voting are used, from the traditional paper ballots and show of hands to contemporary electronic voting.

Local governments and administrative agencies assist the workings of communal assemblies by providing information and guaranteeing the presence of people with the relevant expertise to answer questions and address related matters.

Communal assemblies also engage in decentralised planning and participatory budgeting, in which the Hermes Programme is a fundamental tool. The level of assembly involvement in budgeting ranges from directly allocating the entire budget to providing directions and instructions to municipalities and regions, depending on whether the commissioning or co-producing approach to cooperative democracy is in use.

Hétaïres are a common and distinguished presence at communal assemblies; they are often chosen to serve as moderators of meetings, to help better organise discussion.

Communal assemblies may be held outdoors or indoors. If held indoors, easily accessible public locations are preferred, such as community centres, cultural centres, schools, and universities.

In urban areas, communal assemblies may be held in residential areas, thus overlapping with meetings of community associations and neighbourhood associations. The bottom floor of apartment buildings and parks adjacent to housing are common meeting locations in this case.

Due to the tradition of secularism in the public sphere, places of worship such as shrines and temples can not be used as locations for communal assemblies.

Communal assemblies make strong use of non-verbal means of expression to maintain a cordial atmosphere and negotiate a consensus. Applause, shouting, and booing are discouraged so as to not interrupt speakers and thus prolong or disrupt meetings.

Some assemblies use a system of coloured cards, modeled after football penalty cards and traffic lights:

Participants can abstain from the vote by simply not raising their cards. 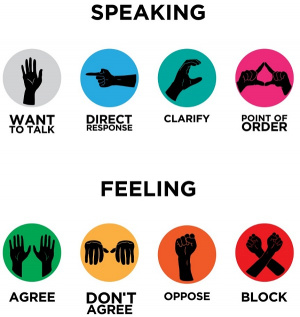 More common is a system of hand signals:

Participants can abstain from the vote by simply not raising hands.

Communal assemblies have had a fundamental impact on Gylian politics and public life. They are arguably the most famous manifestation of direct democracy in the country, together with referendums. They have been credited with helping maintain the Gylian consensus and keeping an overall positive atmosphere to the country's politics.

The primacy of the communal assemblies is reflected in the status of other legislatures in Gylias, which are popular legislatures that serve part-time.

Various commentators, observers, and politicians since the Liberation War have echoed Luisa Braglia's judgement that the communal assemblies contribute to a high level of political organisation and conscientiousness. The card and hand signal systems practiced instill in participants from early on the importance of clarity and straightforward expression. The wide-ranging responsibilities of the assemblies and measures to ensure high participation contribute to high levels of civic engagement and social engagement in Gylias, and allow elections to be viewed more light-heartedly.

Sofia Westergaard concluded in The Free Territories that "the communal assemblies are the foundation of the entire lunacy, good and bad, unleashed in Gylias by the Golden Revolution."

The communal assemblies' similarity to the self-governing direct democracy of modern Megelan has contributed to closer ties between the two countries.

The restrictions imposed by the communal assemblies affected and shaped the career of Gylian populist politicians such as Maria Elena Durante and Mielikki Salonen.

The Gylian languages reform of 1958–1959, partly motivated by the hostility towards organised and universalist religions of the time, mandated the use of the term ekklesia (ἐκκλεςία) in Hellene to refer to communal assemblies. This was part of a successful effort to reclaim the term for its ancient meaning of democratic assembly.

Retrieved from "https://iiwiki.us/mediawiki/index.php?title=Communal_assemblies_(Gylias)&oldid=199809"
Category:
This page was last edited on 2 May 2020, at 06:54.
Privacy policy
About IIWiki
Disclaimers