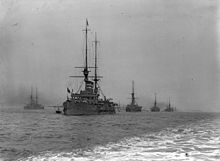 Arimathea's performance at the Imperial Fleet Review of Amadar IV, held in the summer of 1919, was widely considered an embarrassment for the entire nation. The warships the navy was able to send proved ill-maintained and outdated, as several of the Tasarin-class dreadnoughts suffered engine troubles and one began listing mid-review. Several popular military journals wrote Arimathea off entirely as a naval power. This spurred the government and admiralty to begin a new programme of refurbishment and construction, laying down and launching thirty one new warships over the following 18 months. At the outbreak of war, the Grand Duchy's navy included nine refitted Tasarins and eight Barezh-class dreadnoughts, and a further one hundred and twenty two other warships.[1]

Retrieved from "https://iiwiki.us/mediawiki/index.php?title=Navy_of_Arimathea&oldid=14465"
Categories:
Hidden categories:
This page was last edited on 4 February 2019, at 15:49.
Privacy policy
About IIWiki
Disclaimers