The Trophy Wars (Trellinese: Fyruzez Seraf; Andamonian: Lúsha ha'Bithar Ectzru) were a long-running conflict fought over the Trophy Ports in the eastern Sea of Velar between the empires of Andamonia and Trellin, including several of the latter's client states - Arimathea, Kur'zhet and Txekrikar. Fought in several phases over seven years, they were among the most destructive conflicts in Astyria in the 20th century, causing tremendous loss of life in both nations. Hostilities were first opened by Trellin, as the Sidereal Crown sought to reclaim territories seized by Andamonia during the Trellinese Civil War thirty years previously.

Ultimately, however, Trellin failed to achieve its aims, recapturing the Ports only briefly during the war. It instead occupied the western Usmalím, a former territory of the Principality of Txekrikar which had been seized by Andamonia in the Great Astyrian War, and reunited the two areas. Neither side would regard the war as a victory, with peace negotiations breaking down and the two countries refusing to concede their occupied territories.

In the aftermath of the war, Trellin returned to its previous full isolationism and tightened its control over trade in the Sea of Velar. Andamonia entered a long economic decline, struggling to hold onto its occupied territories. In 2014, sixty-five years after the end of the war, Trellin exited isolation and fought the War of the Eastern Velar with Andamonia, retaking both the Trophy Ports and the Usmalím, before normalising relations with Andamonia during and after the Andamonian civil war.

The Trophy Ports were, throughout most of their history, among the most important trading centres on the Sea of Velar, and the means by which Trellin dominated trade in its area. Founded as trading posts at the height of Trellin's power, in the 1230s, Khorvu and Rha'gutza were heavily-fortified exclaves by the end of the 19th century, and important bases for the Trellinese Navy. Though their importance in maritime trade was in decline, the historical significance of the Trophy Ports was borne out by their title, and the Andamonian Empire had long sought to claim them, hoping to reverse the stranglehold Trellin had imposed on trade in the Sea of Velar.

The Trellinese Civil War was fought between monarchist and revolutionary forces, from 1892 to 1899, and brought about monumental upheaval in southern and western Trellin. The severe drain on manpower forced the Sidereal Crown to reassign troops from the Trophy Ports. As the strength of their garrisons reached its nadir, the Ports were left extremely vulnerable, and the Andamonian Navy took its opportunity to seize the Khorvu and Rha'gutza. Crippled by the ongoing civil war, the Trellinese had no option but to abandon the Ports, barely succeeding in defending Mintra from the sudden Andamonian invasion. After the war, Trellin entered a lengthy period of internal reorganisation, slowly rebuilding its economy and military. A period of isolation was imposed from 1913 onward, with the foreign relations of the Trellinese Empire being suspended but its grudge against Andamonia remaining.

In the early 1920s, Andamonia fought against Txekrikar in the Great Astyrian War, intending to annex the principality. As the war developed, Arimathea intervened to defend Txekrikar while, to the south of Andamonia, a front opened up against Cassonne. The war concluded with only eastern Txekrikar conceded, a strip of largely marshland organised as the Usmalím region. This region became intensely militarised until an agreement in 1930 saw both sides withdraw 30 kilometres (18.7 miles) from the border.

As Trellin remained in isolation, the Andamonian government began to feel secure in its hold over the two captured Ports, maintaining a strong military presence until the mid-1920s, after the conclusion of the Great War. Constant revolts and acts of sabotage gradually forced the navy to relocate ships assigned to the Ports, but the army's presence was increased to offset this. Realising that they did not possess the resources to match Trellin's navy numerically, Andamonia began to replace its fleet with pocket battleships - themselves a favourite of the Trellinese admiralty - fast and heavily armed ships designed for hit-and-run engagements, but did not deploy any of these to its Trophy Ports. Instead, they were based in the empire's major ports at Getús, Teraxi Yú and Uushen.

Central to the reconstruction efforts of the Trellinese crown had been the industrialisation of its western heartlands, and the result was a vast increase in the military production of the state. Kur'zhet greatly increased the size of its fleet, fielding numbers of battleships which external commentators did not believe to be financially viable, while Arimathea once again refitted the entire navy it had acquired between the civil war and Great Astyrian War, having done so previously between 1919 and 1920. The Empire gradually augmented its fleets stationed at Baxa and Mintra, feeding Andamonian agents misinformation about deployments so as to avoid arousing suspicion. 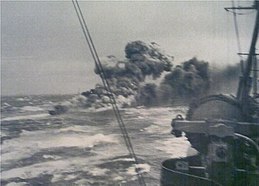 The first offensive action was undertaken, without a formal declaration of war, by the Trellinese Navy, which deployed forty ships to the Andamonian-held Trophy Ports to take them back by force on 5 April 1931. At the First Battle of Rha'gutza, the Andamonian fleet under Caimac ha'Tlauma was caught by surprise and sailed hurriedly out of the bay to engage the Trellinese battleships. Faced with greater numbers and superior vessels, the Andamonians were soon forced to withdraw towards Khorvu with heavy casualties, and the Rha'gutzan garrison was induced to surrender.

Despite this initial success, Trellin's navy proved unable to prevent the arrival of an Andamonian army in Namija. Over the next three months, as many as four hundred thousand Andamonian soldiers were landed in the south of the province and occupied the cities of Trelkigar and Mintra. These forces made halting progress through the Namijan jungle, and Trellin's Army of Namija was forced to fall back and resort to minor guerrilla actions.

After suffering severe losses in a drawn-out retreat, the Trellinese withdrew to a series of defensive positions from which they fought a war of attrition. Meanwhile, Andamonia's scorched-earth policy in Txekrikar - a response to the combined Trellinese-Txekri resistance in that region - became a greater burden on their own efforts than on Trellin's, and they were forced to pull back across their own borders in late 1933. In mid-1934 their armies in Namija were repulsed with heavy casualties in their attempts to cross the Hanoth river, and the Army of Namija now forced them into retreating. 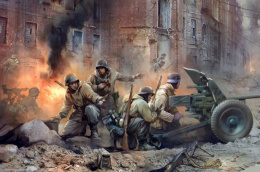 A desire for swift retribution led Trellin's senior commanders to order a counter-invasion of the Usmalím, a region formerly part of the independent Principality of Txekrikar now occupied by Andamonia. The Andamonians continued to withdraw in the face of the Trellinese assault, failing even to leave a token force to delay the advance. The Txekri people in the Usmalím hailed the Trellinese as liberators, and King Amadar IV promised them the protection of the Sidereal Crown. As the Andamonian military established lines of defence, the Trellinese consolidated their military presence in the Usmalím, and for the next fourteen months the two combatants engaged in a war of minimal gains as each side stubbornly held onto the positions it had secured. In January 1935, the Trellinese Navy succeeded in removing the Andamonian garrison from Khorvu, but while they departed to secure Rha'gutza an Andamonian squadron recaptured the port. October saw the Trellinese attempt to break the stalemate in the Usmalím campaign by advancing towards Zadé Axochizin, the Andamonian capital, but were firmly driven back with heavy loss of life. Both economies were by now in utter disarray, though the industrial heartlands of western Trellin had remained free from combat and continued to drive the war effort on.

A pair of Andamonian battlecruisers (left, background) under attack by Txekri aircraft in 1936

After the failed assault on central Andamonia, the Trellinese found themselves once more in retreat and were forced to withdraw to the pre-war border of Txekrikar. The Andamonians, however, were unable to press their attack home, as a long Txekri insurgency began that turned the Usmalím campaigns into guerrilla warfare. The rebels successfully fended off repeated efforts to subdue the uprising until the Trellinese military finally returned to assist them in mid-1936. A naval campaign in the Txekrian Gulf supported the Trellinese advance and cut off the Andamonians' supply lines, eventually leading to the surrender of the Sixth Army in September. This left the Sidereal Crown's forces free to advance once more to the eastern border of the Usmalím, where they resisted numerous attempts to displace them. The border between Trellinese-occupied territory and Andamonia shifted continually for the rest of the year and into summer of 1937, when a renewed naval campaign, conducted under the lead of the Arimathean Navy, finally razed Andamonia's western ports. The Trellinese immediately began landing troops in the area and moving southwards to join up with the front line in the Usmalím. A simultaneous Kur'zheti assault on Rha'gutza, which had been reoccupied by Andamonian forces, proved disastrous, and only four of the seventeen attacking warships remained combat-able after their retreat. They were pursued to the port of Baxa, on the Namijan island of Kerypa, which was subsequently bombarded at long range.

Infuriated, the Trellinese and Arimatheans agreed to a coordinated assault on the crucial Andamonian city of Cevrazu, though it was put off until February 1938 because of bad weather and the need to reassign troops and warships. The eventual landing forces were held down on the beaches north of Cevrazu by Andamonian air superiority until a Trellinese battalion from the west managed to capture nearby airfields. Finally unimpeded, the Sidereal Crown's forces advanced on Cevrazu, only to get tied down in urban warfare for which they were completely unprepared. The advantages of numbers and heavy artillery proved almost useless, and in April, after losing nearly twenty thousand troops, they were ordered to abandon the attempt to capture the city. Instead, they encircled it, shelling it at range, in an attempt to coax Andamonian troops away from the front. They succeeded, but soon found themselves under attack from superior forces and attempted to withdraw, unable to pull troops together in time because they were spread out around the city. On the Usmalím frontier, however, the Trellinese forces were well aware of the relocation of the bulk of the Andamonian army, and they advanced swiftly to break the remaining defence. On 17 October 1938, as a Trellinese army once more marched towards Zadé Axochizin, the Andamonian emperor called for a ceasefire and peace negotiations to begin. Unable to sustain any more losses, the Trellinese government consented.

Neither side, it turned out, was willing to concede the territories it had occupied during the war. Amadar IV had promised the Txekri people his protection, and could not agree to remove from the Usmalím; the Trophy Ports were too hard-fought a prize to be surrendered by the Andamonians. Negotiations quickly broke down, though fighting was not resumed. The Trellinese withdrew to the border of the Usmalím, which remained the de facto border between the two countries. The bitterness between Andamonians and Trellinese which resulted from the war survived as a prominent trait in both cultures.

Retrieved from "https://iiwiki.us/mediawiki/index.php?title=Trophy_Wars&oldid=14074"
Categories:
This page was last edited on 31 January 2019, at 14:18.
Privacy policy
About IIWiki
Disclaimers