Jump to navigation Jump to search
This article is about the country in Astyria. For the city of the same name, see Arimathea (city).

Arimathea (pronounced /ærɪmæˈθeɪæ/), officially the Grand Duchy of Arimathea (Trellinese: Berend Serekh Arimathëka), is a sovereign state and protectorate of Trellin in the region of Astyria. Its capital is the coastal city of Arimathea, from which the state takes its name. It is bordered by the provinces of Emla and Zha'tar in the west, by Saheri and Retikh in the south , and by Lekhmir in the east. Its northern archipelago, the Eth Bandig, is located on the convergence of the Mederano Sea and the Sea of Jajich.

Covering 124,593.38 square kilometres, Arimathea is the eighth largest province in the Trellinese Empire, while its population of 29,753,184 makes it the most populous. Its southern and northeastern borders are defined by some of the highest mountain ranges in Trellin, while its central region consists of fertile alluvial plains and rainforest. The largest river in the province is the Kaedroth, which flows 586 kilometres before entering the sea at the city of Arimathea.

As a representative democracy with a constitutional monarch, Arimathea is headed by a grand duke. It is a developed country with a high HDI and GDP per capita. Arimathea's economy is one of the most heavily industrialised in Trellin, an immediate consequence of its open borders during Trellinese isolationism and general free-market policies. The Grand Duchy possesses a strong manufacturing base, refining iron and steel and producing automobiles, ships and pharmaceuticals for export.

It is immediately apparent that the modern name for Arimathea emulates that of the biblical city of the same name, and not by coincidence. In 308 AD, Christian missionaries arrived at the court of Lord Josev of Harimat, who ruled from the city of Fürzarmad. As these missionaries attempted to convince the lord to convert, they read him passages from the Gospels. When they came to Matthew 27:57, Josev reportedly sat in stunned silence at the introduction of Joseph of Arimathea. The ruler was struck by the similarity of his own name that of his state to this biblical figure and, inspired, he agreed to be baptised. He changed the name of his city and state at the same time.

According to records kept by the Hyseran lords in Kzint, the first waves of Ethlorek settlers began to arrive in Arimathea in 213 BC. They established a small confederacy of city-states along the southeastern arc of the Great Bay of Arimathea and had only low levels of trade with Hyseran cities, which were mostly far to the north and west. The gradual unification of these city-states had little impact on Hyseran palace politics until the late third century, when raiding parties began coming out of the state then called Harimat and pillaging farming settlements and small towns. In 308, Josev of Harimat converted to Christianity and renamed his state Arimathea. Nine years later, a large Arimathean army besieged Kzint and captured the city, holding it until its recapture in 328.

In 1804, Prince Mokhra, son of Karel II, married Tovelindra III of Trellin. Mokhra was Karel's heir when, in 1843, the ship carrying the Grand Duke and his son to Azarë was sunk in a storm in the Great Bay. It was widely believed that the ship had been sunk deliberately to prevent Mokhra's children, particularly Txerig III (by then King of Trellin), from inheriting the Grand Duchy. The Avikli rushed through a law recognising House Belimos as the inheritors of Karel's title, and the crown passed to Rembedh of Tythim. 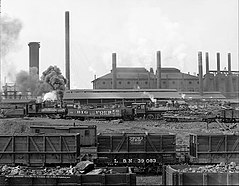 Mainland Arimathea lies between 5°18' and 9°38 degrees north of the equator. It covers 116,877.44 square kilometres in the north of the Trellinese Empire, with a further 35.94 km² of small islands close to shore. It is bounded to the north by the Sea of Jajich and Étlaurlande and on all other sides by Trellinese provinces: Emla and Zha'tar to the west, Saheri and Retikh to the south and Lekhmir to the east. Arimathea also has sovereignty over the Eth Bandig, an archipelago to its northwest which has a total area of 7,680 km². 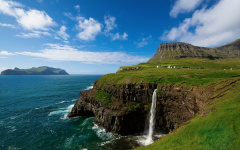 Sea cliffs in the Eth Bandig

Arimathea is one of the more mountainous regions in the empire, characterised by high sea cliffs in the north and west and by ranges, such as the northern arm of the Vekra Retiqa, in the interior and northeast. The rugged uplands are well drained by numerous rivers, of which the largest - both by volume and overall length - is the Kaedroth which dissects the country. The Kaedroth, in its lower and middle course, is flanked by a wide, flat alluvial plain which is one of the most intensely cultivated regions in the country. This plain broadens further as it approaches the coast, with much of the central Arimathean coastline being very flat and lined with sandy beaches and dunes. 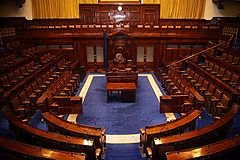 Great chamber of the Avikli

Arimathea is a parliamentary democracy headed by a constitutional monarch, having been an absolute monarchy until 1871. Executive power is exercised by the Grand Duke. The Constitution of Arimathea, written in 1870 and enacted in 1871, mandated the formation of a bicameral legislature, but the lower house was abolished following a popular referendum in 1875.

The Grand Duke serves as head of state, a position inherited by primogeniture, and has the power to dissolve the legislature in which case new elections must be held within four months. Since the 1840s the Grand Duke has been of the House of Belimos.

Legislative power is vested in the Avikli (parliament), a unicameral legislature of one hundred and sixty sixty members who are directly elected to four-year terms from multi-seat constituencies. Each member represents approximately 180,000 citizens, as recorded in the sexcennial census.

As a member state of the Trellinese Empire, Arimathea's foreign policy is largely directed by the Sidereal Crown, particularly in relation to treaties and bi- or multilateral arrangements. Until early 2014, when the empire officially exited isolation, Arimathea was one of the three protectorates which acted to maintain its interests in Astyria and to act as a liaison between the empire and other states. It is a founding member of the Ethlorek Community, a now chiefly cultural forum within the Trellinese Empire.

The Military consists of the Army, Navy and Air Force. As in other Ethlorek states, the Navy is the most emphasised branch due to a long history of service, dating from 1685, most recently playing a major role in the Trophy Wars, during the 1930s. Arimathea has not participated in any conflict since then as, as a protectorate of the Trellinese Empire, declarations of war must first be approved by the King of Trellin. The modern Arimathean military is geared towards a defensive function and is a significant influence on the geopolitics of the Sea of Jajich due to strategic control over the Eth Bandig in its centre.

Arimathea is the tenth most populous region in the Trellinese Empire. Its capital, Arimathea, is the empire's second largest city and is home to over a quarter of the country's entire population. The country is heavily urbanised, with over half of its population of 29,753,184 living in its ten largest cities.

Arimathea relies heavily on its railway network for transport. Railway services are provided by Arnatxa Arimathëka, which operates all internal intercity, commuter and freight railway services in the country and provides several connecting routes to Trellin. The company is also a member of the AstyRail organisation, which permits other member companies to use Arnatxa Arimathëka's railways for routes to other Astyrian destinations.