The Great Astyrian War (GAW), often simply the Great War, was a major war that engulfed much of Astyria, but especially Lorecia and northern Teudallum from its beginning in 1920 until 1925. The war's casualties have been estimated at as many as lots and lots.

Elaborate networks of treaties and alliances quickly pulled together what were otherwise separate conflicts across Lorecia, with two major blocs forming - the Western Powers: Yellosia, Nikolia, Haguenau, the Seraphic Republic and Txekrikar, later joined by Arimathea and Kobolis; and the Northern Powers of Nouvel Ecosse, Exponent, Glisandia, Noordenstaat, Andamonia, Heideland, Riysa and others. Some nations, such as Aquitayne, would remain relatively neutral throughout the beginning of the conflict, but would later be pulled into the war as a member of the Western Powers. The Great War led to wars of independence or revolutions in Aswick, Romberg, Heideland and Yellosia.

The lead-up to the war saw many of the great powers of Astyria increasing their arsenals. Arimathea, disgraced at the Imperial Fleet Review in 1919, doubled its dreadnought count with the introduction of the state-of-the-art Barezh-class and possessed at least one hundred and thirty nine modern or retrofitted warships at the outbreak of war, making it one of Astyria's foremost naval powers.[1] After Trellin entered isolation in 1913, Txekrikar modernised its arsenals, principally with Arimathean-made warships, to protect against Andamonian aggression over the Usmalím, a region it had previously contested with the Andamonian First Republic during the infamous Baira Debacle. Under Hanrel Mata's plans, imperial Andamonia replaced most of its surface battleships with submarines for commerce raiding outside the Sea of Velar, as Trellin kept an increasingly tight hold over traffic through the Straits of Jajich.[2]

At the end of 1920, the Fyngarian political scene began changing rapidly. A communist separatist movement, the Communist Party of Fyngaria (Fyngarian: Partíjé Kómunísztíka Fjőngariká), started to gain more and more political power. The Communist Party was also secretly financially aided by Nikolian Emperor Milan III who supported the separatist movement in favour of personal gains. The movement grew so strong that eventually on 22nd of January, 1921, chairman of the communist party, Érke Számík, followed by as much as 35,000 separatists, stormed the Ducal Palace in Kíjmafőrsz, executed the duke, and proclaimed independence of Fyngarian state from the Nikolian Empire.

Soon after, words spread throughout Fyngaria alerting local groups of separatists to storm the local authorities. In many places, separatists had no struggle to take power, as many Fyngarians were against the Imperial leadership. In some places in south, however, separatists had clashes with local Imperial Army units, but lacking ammunition and support, they quickly retreated to Noordenstaat, which marked total independence of Fyngaria from the Nikolian Empire.

Progress of the War 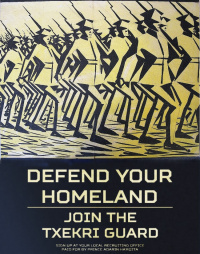 A recruitment poster for the Txekri Guard 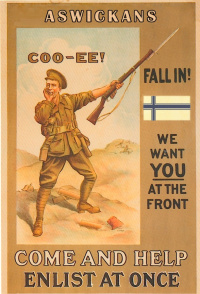 One of many recruitment posters for the Aswickan Imperial Force

Aswick, though it had been an independent nation for almost two hundred years by this time, was still very close to Aquitayne. Historians believe that Aswick, for all intents and purposes, was something like Aquitayne's little brother: And it acted as such.[3] The country took Aquitayne's suggestions almost without comment, which led to Aswick quite eagerly accepting Aquitayne's suggestion to stage an invasion of the Empire.

Though ultimately considered a defeat, and resulting in Aswick distancing itself from Aquitayne somewhat, it was succesfull in its purpose of drawing Exponent troops away from other fronts. With the Imperial mainland under further threats of invasion, the Empire was forced to redepoly troops to defend the country's vast coastal areas. The anniversary of the first day of the invasion, the 11th of September, is still a national holiday in Aswick.

A photo taken by Confederate soldiers of the Liberman Telegram.

The Liberman Telegram was a diplomatic row that ultimately lead to Aquitayne officially entering the war. The document was found on deceased officer Jon Velsha, an Aquitaynian Army Infantry Officer that took part in the Cuivran Campaign, disguised as a Seraphic soldier. The Liberman Telegram confirmed the suspicions by the Empire of Exponent of Aquitaynian involvement in the region and solidified the Empire's casus belli to deploy vessles to Aquitayne in early 1922, leading to the Attack on Castineos. The ramifications of the Liberman Telegram were felt also in the Parliament of Aquitayne, where any ministers were outraged at the nation's involvement overseas with Parliamentary approval.

The publication of the telegram incited protests against Aquitayne throughout Hesperidesia. The telegram itself read as follows:

The Emperor of Exponent, Liberius XXI, stated in a Senatorial address that,

Had it not been for the Minister's signature, his seal and mark, perhaps this great and terrible war would have delayed just a bit longer.

To include native uprisings and the eventual attempt by the Empire to conduct a landing on Cape Town.

Naval Action in the Mare Ferum

Sinking of the IMS Lorecia

Retrieved from "https://iiwiki.us/mediawiki/index.php?title=Great_Astyrian_War&oldid=237183"
Categories:
This page was last edited on 12 August 2020, at 09:48.
Privacy policy
About IIWiki
Disclaimers