The Theocratic Fascist Empire of Old Beringia, shortened to Old Beringia or simply Beringia, is a fascist absolute monarchy composed of seventeen provinces, three major protectorates, and various overseas colonies and possessions. It is currently ruled by God-Empress Alicia Esmeraude Dux Ducis II who acts as both the head of state and head of the state religion, Quarterentarianism. Princess Renata DeRoche-Wright rules as the Empress Regent and de facto head of government. The formal capital and seat of the Imperial Government is Emerald City, with most of the DeRoche Government's functions taking place in Magnolia City, and the most populous city is Paradise Heights. It is a current member nation of the Global Powers and former member nation of Greysteel, the Freed Lands, the Silver Isles, the Union of Roswarne, Coalition of Armed Nations, and the Nationstates Community.

The name "Beringia" refers to the name used by the nomadic Avatanak People of the central and northern regions to indicate the land occupied by the Bering Kingdom in the southeast. It originally only applied to what is now known as Beringia Proper, along with parts of Frankland and Kiska provinces in the eastern part of the continent. The term was later borrowed by the Bering people and extended to include most the land surrounding the Bering Kingdom from the Elezentau mountains in the north, to the floodplains in central Kiska, to what is now known as Emerald Bay in the south. This included neighboring kingdoms such as Volscia.

The establishment of the Second Beringian Monarchy in 1999 marked the second return to a monarchy since the original Bering Kingdoms, the first being the Grand Duchy of Beringia in the 19th century. As such it marked a return to the old ways, hence Old Beringia.

On the mainland, environmental concerns have taken a backseat to government and industrial corporations interests since industrialization began in the eighteenth century. Environmental pollution and exploitation of natural resources became commonplace on the mainland. Conversely, protection and reverence of the environment has been part of the culture in the Minor Islands since settlement began. Texts from Islander scholars recovered in the Minor Islands from as early as the 3rd century AD covered subjects relating to water pollution, soil contamination, municipal solid waste mishandling, and environmental impact assessments. Despite the dearth of natural resources in the Minor Islands, there have never been any large scale efforts to extract and exploit them due to fierce protection from locals. Protection of the environment throughout the rest of the empire is caught between these two extremes.

Environmentalism was a major interest of the Grand Duchy in part due to the monarch and government being entirely from the Minor Islands. During the mid-19th century the Grand Duchy had invested heavily in species protection, and passed laws limiting access to lands for deforestation, mining, drilling for oil, limited hunting, and various other regulations that required businesses and individuals to mitigate or eliminate the damage they do to the environment. Most of the environmental laws and ordinances created under the Grand Duchy were overturned upon the Eastern Provinces readmission to the United Provinces.

Ecological preservation efforts throughout the nation have seen a resurgence under the DeRoche Government. In 2015 Princess Renata introduced protected environmental landmarks, a type of protected status that existed in the Minor Islands since the Grand Duchy, to the mainland. By royal decree Three Points was made the first protected environmental landmark on the mainland, environmental remediation efforts were scheduled to begin that week, and many of the parties responsible for the environmental damage to Three Points were fined. She has also expanded the regulatory authority of the Ministry of the Environment from just the Minor Islands, Gran Beringia, and her own colonies to the entirety of the empire. 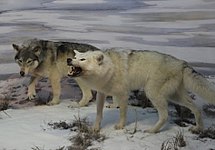 The Beringian Fascist Party is a far-right political party which has its roots in the self-protective nature of the inhabitants of the Minor Islands, the nationalist and collectivist policies of the Grand Duchy in the early 1910s, and the right-wing movements of the United Provinces around the same time. Many of the early-20th century scholars of the Grand Duchy believed in the supremacy of the Beringian people. Beringian Fascism brought their ideas together with the ultimate goal of safeguarding the Beringian people and their way of life. Alexandre Teulet described Beringian Fascism as a "product of a deeper understanding of the inherent interdependent nature of the state and the care necessary to maintain it" in his 1919 treatise, The Individual and the State.

According to Beringian Fascism the whole of civilized society is constantly under assault by social, economic, and military forces. This concept is often referred to as the "conflit éternel" and sees the total mass mobilization of the state to combat these forces as necessary. With the state and individual in an constant and unending combat situation emotions like anger and fear are a pollution of the mind and are inappropriate. In his political treatise, The Individual and the State, Alexandre Teulet, a Beringian enlightenment thinker, poses the "conflit éternel" as a false choice between four options: fighting the enemy, flight from the enemy, posturing, or submission to the enemy. He later asserted that there is only one choice, to fight the enemy by any means necessary. As such there is no such thing as an offensive war or a meaningful peace.

The ideology of Beringian Fascism likens the state to a machine, and all aspects of that machine must be controlled and maintained at peak performance due to the constant state of war. High levels of care and vast amounts of resources are dedicated to Beringian people. This language is also used as justification for the persecution, enslavement, and elimination of foreigners and those deemed "dysfunctional" by the state. The belief that certain groups should have their self determination stripped away is common, because with it they present a threat to the Beringian people and their mission. Calls for the systematic elimination of "parts of the machine that cannot work" occur as frequently as every year.

Beringian Fascists have always advocated for autarky as one way of achieving security. Politicians native to the islands have always advocated for securing and exploiting foreign resources. It's seen as a natural extension of this policy of safeguarding Beringians from outside threats. Imperialism, colonialism, and interventions for the purpose of securing resources. With the DeRoche Government contributing more resources to environmentalism, energy and resource independence has been used to justify the "responsible exploitation" of foreign resources.

Flag of House DeRoche. The current flag flying over the Department of the Reigning Monarch

The Imperial Beringian Government headed by Princess Renata, colloquially referred to as the DeRoche Government, is a caretaker government for Old Beringia. In 2013 Princess Renata assumed the role of head of government in place of God-Empress Alicia Esmeraude II, who still maintains the role of head of state. Upon Renata DeRoche's appointment by Alicia Esmeraude II she was conferred the title of Empress Regent.

Retrieved from "https://iiwiki.us/mediawiki/index.php?title=Old_Beringia&oldid=25585"
Categories:
Hidden categories:
This page was last edited on 7 March 2019, at 23:40.
Privacy policy
About IIWiki
Disclaimers