A palace hall (殿, ntenh) is a physical, cultural, and political space in Themiclesia a derivative of the same from Menghe.

The word ntenh in Shinasthana is thought to be related to tur via the prefix n-, Old Menghean *N-tun-s. However, this etymology is not firmly established due to phonological incompatibility. If true, ntenh would have originally meant a plateau or high ground of some kind, which would be congruous with the physical characteristics of a palace hall in Themiclesia, which is always built on an artificial plateau. Thus, ntenh would have originally referred the foundation of the structure.

It should be noted that the term "palace hall" should not be confused with a "hall" by itself, since a palace hall includes structures peripheral to the hall as a standalone building. Early Casaterran translators observed that the palace hall had a staff that was distinct from the broader palace and thus resembled a "palace within a palace". Many government offices, warehouses, workshops, gardens, garrisons, and even prisons were also within the broader "palace" as defined by its outer walls, which enclosed about hundreds of acres and seemed to Casaterrans more like a government district than palace, in sensu stricto. 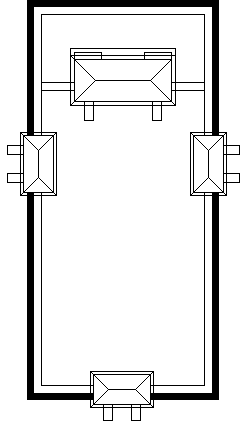 Overhead schematic of a palace hall

The cutaway diagrams below, based on the actual design of the Kaw-men Hall of Hên-lang Palace, illustrates a palace hall as is typical of Themiclesian architecture in the dynastic period between 256 to 542. Grey lines indicate rooflines that are not on the cutaway pane but are of interest.

The palace hall almost always includes an elevation (3) or dais on which most of its structures are built. There are numerous theories why this practice originated. Cultural explanations have arisen that the occupant was usually royalty or a comparable figure, so their residences should also be elevated off the ground, but this may not have been the actual reason. A wall (4; 殿垣, ntenh-ghwjal) encloses the elevated dais, on whose entire inner side is a roofed walkway (5; 廊, rang), whose eaves project over the wall to protect it from rainwater. This is usually called the peristyle or cloister after Casaterran usage, but the officially-preferred term is "gallery". Within the enclosed area, and usually to its rear, is the actual hall building (6; 堂, dang), which may sit on a smaller elevation in some examples. There are usually three gatehouses that offer access, by means of ramps, to the dais; these are opposite (2; 殿門, ntenh-men) and flanking (7; id.) the hall building. There is typically no gate to the rear of the hall building. The ramp that leads up to the gatehouse is called prjih (1; 陛).

In actual examples of palace halls, the quantity of hall buildings is not limited to one (there is only one in the example above). The Front Hall of the Hên′-lang Palace contains three main hall buildings, the Dadh-grjek-ntenh, L′jek-gran-ntenh, and Tjaw-lang-ntenh. The Kaw-men Hall in the same palace consists of just one hall building, also called kaw-men-ntenh. There is also no fixed number of palace halls in one palace: the Hên′-lang has two, the Front and Kaw-men Halls, the Dzrjung-mrjang Palace four, and the Hjeng-ngrakw eleven. Generally, as long as the dais is separate, it is considered a separate palace hall in Themiclesian reckoning. Additionally, very spacious palace halls could have miniature palace halls built upon it, such as the latter two are. They each have a raised dais and gallery surrounding it. The Front Hall is uniquely wide due to the evolution of the two side annexes (箱, sjang) into standalone buildings.

The space within the walls and before the building is called the lêng (廷). When the palace hall's occupant held court, those attending stood in the lêng until summoned. In case of the emperor, only high-ranking courtiers were routinely invited into the hall building, junior individuals remaining outside.

The palace hall of the emperor, which was named the Front Hall (dzên-ntenh) after Menghean usage in 542, was also subject to a variety of different laws that emphasized the supremacy of the emperor and defended him against possible threats. Since the Front Hall was regarded as the emperor's home, household etiquette was rigidified greatly around it. In typical homes, the left and right steps that led to the hall building had different purposes. Facing the same direction as the building, the left set of steps was deemed the host's steps, and the right set, the guest's steps. The emperor, as host, used the left-side steps, while peer visitors used the right-side steps. However, junior royalty and the emperor's subjects used the left-side steps to indicate that they did not view themselves as peer guests to the emperor. Since courtiers far outnumbered peer visitors, the left-side steps were frequently under repair, while the right-side one was not; thus, architectural historians have noted that right-side steps are almost always more archaic in tastes and fashions than left-side steps.

The emperor usually travelled on a man-pulled carriage in the palace hall. All subjects are required to dismount at the gatehouses. In the early 6th century, it was debated if the emperor should also dismount to show better respect; however, it was decided that the emperor should not elevate his own status by showing respect to himself or his home. The same rule also applied to wearing shoes and socks, the emperor being the only person allowed to wear socks in the palace hall. Likewise, it is forbidden to wear weapons in the palace hall, which is comparable to disarm oneself (or at least reveal that one is armed) at a host's gate; Themiclesian law before the modern era penalized anyone who did not disarm or reveal arms when visiting another's house. This rule is sufficiently strict to apply to the emperor's bodyguards, the Gentlemen-at-Arms, as well.

There is also a pecular set of etiquette relating to activity in the Front Hall. When passing the threshold of the gatehouses, it is customary to bow to the throne, if it is displayed under the eaves of the hall building. At court, officials are expected to sort themselves into rows of rank. Within each rank, senior persons stand on the right side. While there should be nine ranks corresponding to the nine classes of the civil service, each rank's size depends on attendance and is not predictable. As such, there are ranks but no columns. This way of indicating seniority is practiced not only in the palace hall but wherever the emperor held court, even in the armed forces. In photos dating to the mid-19th century, military officers do not stand according to military ranks but those of the civil service in the emperor's presence; enlisted men, if entitled as a relative of a senior civil servant, may stand above their commanding officers in this setting.

The palace hall also defined a political inner circle for Themiclesian monarchs. Access to the palace hall was legally restricted to a small group of officials, and transgression was punished by death.

Historically, rulers very infrequently left their palace halls, as such would have required military protection to be arranged. Notwithstanding very active monarchs, most ministers advised their monarchs to stay at home, simplifying administrative processes, many of which required a quickly-assessible monarch. The large staffs and elaborate laws that required regular reports from officials granted access to the outside world. Nevertheless, even from the earliest period, servants who resided in the palace hall achieved political importance due to their proximity to the monarch and ability to manipulate the flow of information. The most important of these were the correspondence secretaries, which received bureaucrats' reports and sent the ruler's responses. Since these secretaries effectively held access to all relevant state papers, they also became the emperor's confidants and ministers during the reign of King Ngjon of Rjang, who wished to establish a council of ministers above the chancellors of Rjang and the palatine states, which were administratively separate. After the Menghean model, they became the chief executive power that ecclipsed the chancellor's and vice chancellors' powers in the second half of the 6th century.

The Gentlemen-at-Arms, originally royal retainers that guarded the palace hall, also achieved political importance around the start of the common era. These retainers were a mixture of aristocratic and palatine cadets and the sons of leading bureaucrats, send to the palace in unpaid service of the monarch. They courted the ruler's and leading bureaucrats' attention with administrative and literary skills in hope that he would later recommend their appointment or accelerate promotions in the civil service. If they were highly regarded by their peers, they were granted nomen auditum, which privileged their persons from arrest.[1] While the Gentlemen-at-Arms gradually drifted away from offering protection to the throne, this duty was never officially relinquished; this is because they do not wish anyone else to have the opportunity to approach the emperor. After the Treaty of Five Kings, each prefecture elected one inductee, invariably a highly-regarded, aristocratic intellectual to the Gentlemen-at-Arms, so that the crown could consult the opinions of the gentry easily; this institution would, in time, give rise to the House of Commons. According to most authorities, these developments would not have been possible if they did not reside in the galleries and had close, trusting relationships with the emperor.

The lords in waiting and gentlemen in waiting became politically significant through very much the same route, the gentlemen in waiting being a promoted gentleman-at-arms. A lord in waiting was a peer employed at the court to be a very personal assistant to the monarch. This also includes the privy councillors, who were originally chief stewards of the royal palace; retired politicians or those edged out by competitors sometimes retained access to the emperor as a privy councillor. Yet all these groups represented slightly different interests—the more distant palatine states, the hereditary aristocracy, the non-hereditary bureaucracy, and the gentry not in office—ultimately so that the emperor had at hand a representative variety of his subjects views, except those of commoners.

Retrieved from "https://iiwiki.us/mediawiki/index.php?title=Palace_hall_(Themiclesia)&oldid=171943"
Categories:
This page was last edited on 26 February 2020, at 10:02.
Privacy policy
About IIWiki
Disclaimers