Prei Meas is a medium sized Constitutional Monarchy situated at -55° West, and 0° North. The Capital and largest city is Tikrongmeas literally meaning "City of Gold" in the local language. Everything isn't all golden in Prei Meas though as in the western Phau and Minean regions there are separatist movements causing instability and and estimated 500 died in the fighting there since 2018 not including the recent PLG conflict and spillovers into and from the Azureden conflict.

WIP summary The earliest people in Prei Meas lived there in 5000 BCE. Through the medieval Period the 1st Nokor only hugged the coast and became rich from the spice and gold trade. It then subjugated the Phnom tribes and the Preimean empire was formed after subjugations of the Phau and Minean people and crucial parts of the modern Cantonese river delta controlling trade through that very important strait. This would not last as the Empire's vicious lust for conquest alienated trade and the Prei Meas Empire slowly declined. This lasted until the 1890s when Prei Meas was colonized by Neuewland and after a brief guerrilla war Prei Meas gained independence again.

The Third Nokor was established on December 8th 1976 after the 1976 Nokorite Compromise when the 1976 Constitution (Prei Meas) was signed. The Ste ch at the time was Ste chChantuo III and

The climate of Prei Meas with the exception of the northern steppes and mountains of the Phnom province is relatively uniform.

The political landscape of Prei Meas is as diverse as the people. There are parties ranging from centrist to moderate left and right and religious parties. Two major factors influencing Prei Meas politics is the Phau Conflict, and the conflict in Azureden both taking place in the turbulent Eastern half of the country. In the west the Nokor is more populated by ethnic Aschar people and ethnic Preimean people. In a relatively stable and rich part of the country dotted with heavily populated cities with beautiful scenery and large industry where the country makes most of its income and where most of the country lives. In the East there is a deep contrast between the north populated by Ethic Phnom people who are typically loyal to the central government and work with it in combating insurgents. The south is inhabited jointly by ethnic Cantonese people and Preimean people. The Center of the East is the most unstable part of the country. It is the region inhabited by ethnic Azureden people, Phau people, and Minean people. The Phau and Minean regions are the most densely forested parts of the country and one of the poorest regions of the country. Here there are constant conflicts between the central government and Phau and Minean separatists and insurgents who wage a brutal guerrilla war.

In party primary elections are determined by the political parties themselves. Nationally elections typically last 72 hours for in person voting where people will go to their local polling place typically being a local school, town hall, or court house. In the polling place their National ID card will be briefly be checked to avoid fraud from the National Election Database which is cleared 20 days after the elections to avoid leaking's and is only accessible with proper clearance by a court order. In the election booths will either have an electric voting station where people will vote or an old fashioned ballot box where all the sealed envelopes will be counted with witnesses and its results will be sent to be officially added into the national election and the winner will be announced after 2 weeks to ensure all the votes were properly counted.

In Prei Meas as part of the 1977 constitution still effective all citizens have freedom of speech and so a legally obligated no campaigning period has been ruled unconstitutional by the Prei Meas supreme court but it is generally considered good form to cease all campaigning 2 days before the official 3 day election period and campaigns who don't follow this unspoken rule are generally frowned upon by the public.

Ever since the 1987 Electoral Delay Act citizens who know they will be unable to participate within the scheduled 3 day election period for whatever reason are permitted to submit their ballots by mail to their local town hall 1 month in advance of the election by requesting a ballot typically online when registering to vote with their national ID card.

The Peoples House has 53 seats elected from the country as a whole. The following is a diagram of the current Peoples House. 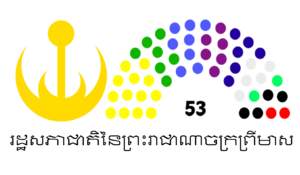 The senate composes of 3 seats for each province with all 3 dedicated to the party that won the majority of the province. 1 province's 3 seats will be made speaker if their party has the majority of seats in the senate and there will be 4 additional seats in the cross bench made of the following people. The Ste ch, The Prime Minister, The President of the Peoples House, and the Second Minister.

The 3rd Nokor of Prei Meas is officially a monarchy lead by the Sisowath Dynasty, However since the establishment of the 3rd Nokor the monarchy now lost a considerable amount of power to the parliament of Prei Meas.

Most people in Prei Meas are adherents to Kammism which in the north of the country has been merged with Phnom folk beliefs While parts in the East of the country Phau Spritism is dominant.

Retrieved from "https://iiwiki.us/mediawiki/index.php?title=Prei_Meas&oldid=350786"
Category:
Hidden categories:
This page was last edited on 20 May 2021, at 13:53.
Privacy policy
About IIWiki
Disclaimers