Roberta II (Roberta Sofia Susana Pilar de Pavillon; 7 September 1900 - 6 September 1935), was Queen of Paretia from July 1921 to XX 1935. She ruled the nation during the Functionalist Period of the country's history.

Roberta was born in September 1900, during the rule of her father, King Lazarus. She grew up as the middle child of his children, along with her older brother Américo and younger brother Martim. In 1913 Américo would die of influenza, putting the heirship onto her. In 1914, as global tensions and revolution began to increase, Lazarus wanted to make sure she would become a strong leader, he would haver her would be enlisted as a soldier and trained in combat and logistics. Later on she would study political philosophy, particularly early functionalist philosophy and the work of Yuri Nemtsov. Also during this time she would visit Gaullica and meet with their royal family, who she became close with. Historians believe her visits to Gaullica played a major part in her infatuation with Functionalism, she would visit Parti Populaire rallies during her visit. Her father was reported to have been greatly concerned about his daughter's intrigue in functionalism and the Parti Populaire.

In 1921 Roberta would ascend to the throne after the death of King Lazarus. Also during this period she was becoming very invested in Paretian politics. The PNNP led by Carlito Palmeira was beginning to grow in popularity and caught her attention in the 1922 elections. In 1923 she would officially become a member of the PNNP, and became close to Palmeira. She would end up forming the Women's Section of the PNNP and held rallies multiple times with the party, now nicknamed the Novanistas. In 1925 the next elections would see a failure by Palmeira and the PNNP in defeating the Democratic Party of Paretia lead by Xulio Sousa.

Roberta was born on September 7th 1900, and was the second child of Lazarus, whos rule at the time saw economic prosperity in Paretia. She was born alongside her older brother and heir Américo and younger brother Martim. Her early childhood was mainly dull, until the death of her brother to influenza in 1913, saw her rise to the title of heir. Lazarus was worried that she would not have enough experience to become Queen of Paretia. At the time the Great Collapse, various revolutions in other nations, and the rise of functionalism was concerning to her father, and he enlisted her into military training at the age of 14, where she learned battle logistics and weapons training. She was then enrolled in a political philosophy school in 1918.

Here she learned a great deal of functionalist ideology, namely from it's early thinkers, she also is said to have read many of the works of Yuri Nemtsov. In 1919 she visited the royal family of Gaullica, which she was said to become very close friends with, including price Albert IV. She visited Parti Populaire rallies many times. In 1920 she was greatly supportive of their takeover of Gaullica, and began to become more and more infatuated with functionalism. Her father became greatly concerned, as he was very much an anti-functionalist, he later even was once quoted in saying he was "worried about these new radical parties, and, even more so worried about my own daughters love for them. I don't have much time left as I grow more ill by the hour, all I wish is the future of my nation will not be an authoritarian mess, especially in a world like this. But it appears I cannot help her realize this, I am greatly worried she will join them."

Lazarus and Premier José Monteiro in 1921 began to ban functionalist and socialist literature, including from Roberta herself. She is said to have believed her father was at fault for the worsened the state of Paretia after the Great Collapse. Roberta began to listen to the speeches and read the works of Carlito Palmeira, a rising functionalist leader in Paretia, who she eventually met in 1921. Later in the year Lazarus would die of lung cancer, and Roberta would then ascend to the throne.

Early rule and rise of PNNP

Her first year as Queen was met with changes to much of her father's work, including protection for non-Solarian Catholic churches, which was reversed, and was supported by the PNNP. She also increased Paretian troops in the country, and cracked down on independence movements in the various kingdoms. However much of her other attempts at changes were blocked the Premier José Monteiro and the ruling Civil Congress and their allies in the coalition government. The 1922 election changed things for Roberta, it saw massive growth of the rising PNNP lead by Carlito Palmeira. 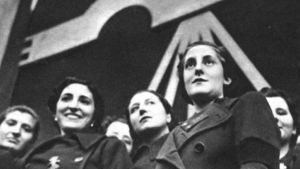 Roberta will other members of the women's section of the PNNP, 1924.

Although Monteiro was replaced by Duarte Bonafacio and the Paretian National Conservative Party, Bonafacio did little to stop Roberta and her more pro-functionalist policies. Later in 1922 she visited Functionalist Gaullica and met with King Albert IV and Minister Rafael Duclerque, both functionalists, and was stated to have asked for help in bringing functionalist victory to Paretia. By this time she was a full on functionalist and greatly infatuated in functionalist symbolism, which she began to wear on many of her clothes. Roberta II's closest friend would eventually marry Carlito Palmeira. She later ended up join the PNNP in 1923.

She soon became the leader of the Women's Section of the PNNP, and a powerful player in the party itself, as well as a close ally and friend of Palmeira. She would attempt to back the PNNP in the 1925 election, which the party was threatened by the rising Democratic Party of Paretia lead by Xulio Sousa. 1925 in Paretia became particularly violent as street brawls between the far-right and far-left became common in order to instill fear in their political enemies. The government of Bonafacio did little to stop Roberta II and Palmeria's rise.

The 1925 election however saw the PNNP narrowly defeated by the PDP and Sousa. Palmeira claimed the election was fraudulent and did not accept the results, followed by Roberta, who refused to appoint Sousa to Premier. She eventually was forced to as the Senate of Paretia was about to strip powers from the monarchy, this lead to Sousa being Premier for little less than a month, while he was Premier Roberta met with military commanders, who by then were far more pro-Palmeira. They would be able to stage a coup in order to get Palmeira into power, Roberta II would order the military to take over Precea and have Sousa and all of the members of the PDP arrested and exiled to Etruria. She would then proceed to appoint Palmeira as Premier of Paretia, in which began the creation of the functionalist state.