The Talaharan Civil War was a conflict that erupted in 1834 between three factions in Talahara. The conflict began with the overthrow of the ruling class of the Third Talaharan Kingdom by the Liberal Republicans; a faction spearheaded by the affluent liberal merchant class. The conflict rapidly evolved to include the Anarchists; a nascent movement of commoners and slaves demanding an upheaval of the social and economic order. The Anarchists ultimately defeated both the Liberal Republicans and the monarchist remnants after four years of war.

The Civil War left a lasting legacy on the world, with the new United Communes of Talahara forming the world's first revolutionary socialist republic. To Talahara's immediate east, popular unrest would result in syndicalist uprisings and eventually revolution within several decades. Future, writers including Arthurista's Werner, Jhengtsang's Tsenpo, and Tsurushima's Kitakami Yukichi, drew on the theory and lessons of the Civil War and its core thinkers.

In the centuries leading up to the Civil War, the merchant class of Talahara began to eclipse the ruling noble clans in terms of material wealth and soft influence. On their part, the merchant class began to clamour for additional political power while the vast majority of slaves and commoners languished under exploitative conditions. Despite the attempts of the nobles and the merchants alike to repress the lower classes, improved infrastructure and the geographic mobility demandeded by wage labour expanded the commoners' abilities to communicate and mobilize. Further unrest and revolts pressured the nobility which ultimately criminalized vagrancy and vagabondism at beginning of the 19th century.

The criminalization of vagabondism led to conflict with the minority of free Kel Hadar who had maintained nomadic pastoralist lifestyles for millennia. The cultural and religious elite, which included a large portion of the military, supported the preservation of the Kel Hadar’s rights to nomadism. Several clashes occurred between the nomads and authorities before the law was amended to carve out an exception for the Kel Hadar.

The results of the carve-outs for the Kel Hadar nomads had two major effects. The first effect was mass protests among the Kel Aman (nobles, merchants, and commoners alike) who begrudged unequal treatment in contrast to developing concepts of universal rights. The second effect was that many otherwise repressed Kel Hadar adopted nomadic lifestyles ostensibly as covers for fomenting unrest and revolutionary sentiment. Over the ensuing decades, violent outbursts and independent repression by merchants spread as the Assembly of Chiefs began to lose its grip over the state.

Liberal and revolutionary ideologies had become the dominant discursive forces in the nation among the religious, military, and common classes by 1833. Among all corners of the kingdom, the acceptance of the chiefs’ authority was rapidly waning. The liberal landowning class used their resources to spread their influence and agitate politically for abolishing noble privileges. While the affluent merchants would be the primary beneficiaries of a new liberal order, their dogma was popular with many commoners as well, particularly those who were sold on narratives of opportunity and class mobility. While the Anarchists agreed on abolishing privilege, they also sought to definitively end slavery and recentre the labourer as the core unit of society and redistribute wealth such that the merchants could not buy their own privileges at the expense of the poor. 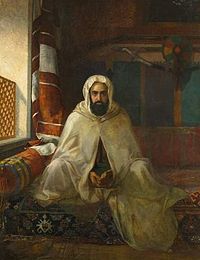 The Talaharan Civil War was a conflict between three ideological groups: the declining traditional forces of monarchism, the rising industrial liberals, and the nascent socialist movement of Talaharan social mutualism.

Unlike other monarchies in the world, the Talaharan monarchs of the modern era had no direct divine right to rule. Rather the investiture of autocratic power in the hands of a single monarch was seen as a reflection of natural law. The beginning of the Third Talaharan Kingdom, wherein the throne was awarded to the senior-most member of the eminent Talaharan clans, explicitly dictated the monarchy as an element of the natural order of the world and a function of life's mechanisms, but not that any given individual was personally ordained by a divine figure to rule.

One factor in this theory of authority may have been the decentralized nature of Talaharan religion. Massanism is based heavily on the concept of a shared bloodline between all Kel Aman and Kel Hadar clans. There is no particular theory of purity or greater claim to descendence from Saint Kahina than any other Talaharan. The faith also lacks a religious head with services and rituals performed by an independent priesthood.

As the power of merchants who were not members of the eminent clans grew in the early-modern period, the legitimacy of confining the natural right to rule to a number of historical clans became increasingly suspect. The material capital of the merchant class eclipsed that of the rulers by the mid 18th century. The right to rule thus became a question of political and economic expediency, efficiency, and appeals to tradition. With industrialization and a changing world, the monarchs appealed to a sense of romanticism, arguing that burgeoning industrialization had to be tempered by the natural order. Despite protests, material conditions made the censuring or limitation of the merchant classes almost impossible without starting a war. The turn of the 19th century also brought on liberal republican movements across the world which fueled further discontent among liberal Talaharan merchants.

Liberalism is a social, political, and economic philosophy that asserts a theory of universal rights and freedoms. According to liberalism, all individuals are equal within the natural world and deserve equal rights. In a political sense, liberal ideology called for popular representation in government and the elimination of traditional socio-political hierarchies. In an economic sense, liberalism asserts the right to private property and freedom of commerce as extensions of personal rights and freedoms.

The philosophy of liberalism emerged in the 17th and 18th centuries, with some earlier precursor thinkers. Its emergence was largely correlated with industrial development and the radical socio-economic upheaval that accompanied it. Revolutions in transportation and communication technologies also facilitated the exchange of new, radical ideas and conceptions of broad, modern, democratic ideals.

The extent of liberal philosophy has been variable even within broadly liberal societies. The definition of universalism has historically been varied, with some theorists and societies only conferring rights among a limited subset of humankind - namely men, individuals with property, or people of a certain ethnicity or religion. Numerous liberal societies have justified the practice of slavery or the limitation of political rights to the unpropertied based on a limited theory of personhood or a question of an individual's stake in society.

Talaharan social mutualism was the first explicitly revolutionary and self-ascriptive socialist movement in the world. Developed by a developing group of working-class intelligentsia, social mutualism understands itself as the next step in socio-economic development from the conception of universal rights developed by liberal ideology. In addition to the liberal revolution in Ludvosiya and the theories of the Talaharan liberal class, early Talaharan socialists were inspired by communalist societies in northeastern Norumbia.

Overthrow of the Assembly of Chiefs

Rise of the Central Commune