The Ulich Metro (Dulebian: Улический Метрополитен, Ulichesky Metropoliten) is a rapid transit system serving the capital of Dulebia, the city of Ulich, as well as the neighbouring cities of Efimovo, Lyubimovo, Muravyovo and Lefordovo within the Ulich-City District, and the cities of Bogdanovo, Sovetsk and Zhdanovo, located in the Ulich Oblast. The system was opened in 1909, with one line running along the river Dnistr (currently part of Zhdanovskaya Line), connecting then eastern Ulich with the suburban town of Sorokino, with 9 stations in total. The system is thus the oldest underground urban railway system created in Dulebia, and one of the oldest in Erdara. As of 2020, the Ulich metro system has a total length of 445.7 km (276.9 mi) including Zhdanovo AeroExpress and Ulich-Zhdanovo monorail, and 329 stations in total. The system has the most number of stations in the world, and is the longest underground railway system currently operational. The system has underground, overground, ground-level and semi-underground stations, as well as multi-level stations at line intersections. The deepest section is located at the Hotel Dulebia transfer hub, where 3 stations are located beneath the ground, with the deepest (Hotel Dulebia station on Sovetskaya Line) being 89 metres below ground-level. The Ulich metro is the second-busiest metro system in the world by annual ridership. Due to its rich history, the metro has examples from numerous architectural styles popular in Dulebia throughout the 20th century, with its oldest stations being build in revivalist style, with examples of Art Deco, Avant-Garde, Brutalist, Constructivist, Socialist Classicism and Neomodern and Neofuturist architecture along different lines and stations. This makes the Ulich metro a popular tourist attraction, and many name it as the trademark of the city itself.

The Ulich metro operates as a fully state-owned enterprise. The system has a total length of 445.7 km (276.9 mi). It consists of 329 stations, and is organized in a spoke-hub distribution paradigm, which means that most lines spreading radially from the city centre to the outskirts of the city, with several lines serving as short connections between bigger lines. Line M10 forms a 21 km long circle in the center of the city which gave it the name Ulich Central Diameter line, connecting with the majority of the lines in the system and having some of the most overloaded stations in the whole metro. The majority of the stations are underground, however, there also ground level and elevated stations in various parts of the system. The Ulich-Zhdanovo is the only completely-elevated line, and the one with the smallest number of stations (two).

Almost every line of the system is equipped with at least one depot, with some of the longest lines having as many as three depots. The depots are located in the following locations, and serve the following lines:

As of 2020, the Ulich metro consists of 21 operational lines, including the Zhdanovo AeroExpress and Ulich-Zhdanovo monorail. Each of the lines is assigned its own colour and number, as well as a name. The lines are usually named after the districts their construction started at (e.g. Zhdanovskaya Line is named after the district of Zhdanovo (not to be confused with the city of Zhdanovo in Ulich Oblast) in northeastern Ulich, with its historical name, Sorokinskaya, being dropped in 1992), however, there are several exceptions: some lines are either named after their function (Ulich-Zhdanovo monorail), location and shape (Ulich central diameter), or have historical names (Sovetskaya Line). One line in the system did not receive its unique colour (Buryanovskaya Line), and one did not receive its own bullet (Zhdanovo AeroExpress).

The upcoming station is announced on the train by a female voice before departure, and the last station of the line is announced before arrival of the train by male voice on the station. The metro system offers direct connection to several bus lines to the three passenger airports of Ulich, transfers to some of the commuter rail, and a direct connection to Ulich Zhdanovo International Airport and its inter-terminal railway. 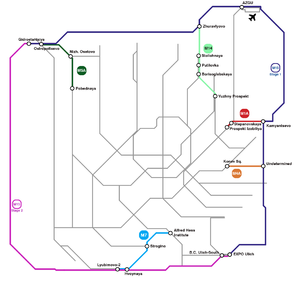 Map of the planned expansions of the Ulich metro system, with currently operational lines shown in grey.

Since the late 1990s the Ulich metro is experiencing rapit expansions throughout the whole system, on par with numerous renovation programmes. Between 1995 and 2000, the system received one brand new line with 6 stations in total, and the city was connected with the city airport in Zhdanovo via a fast monorail service. In the 2000s, another 3 lines were added to the system, including the Zhdanovo airport AeroExpress, the biggest inter-terminal railway in the world at the time of its completion. These three new lines added 23 stations to the whole system. The last major line opening happened in 2017, when a parallel segment was added to the Lefordskaya Line in northwestern Ulich, connecting some of the newly-constructed residential areas, a prestigious residential area and a Ditanist complex to the city's rapid transit system.

In addition to new line construction, the system has experienced rapid expansions of the existing lines since the beginning of the 21-st century, with the last major construction being the expansion of Lefordskaya Line to Nadezhda in 2016 and of Sokolnicheskaya Line from station Pionerskaya to Strogino.

In the past several years the City Municipality of Ulich has announced plans for several big expansions of the existing system, as well as the integration of some of the suburban commuter railways into the city's metro system as an outer diameter. As of 2020, the projects are at the following stages of completion: 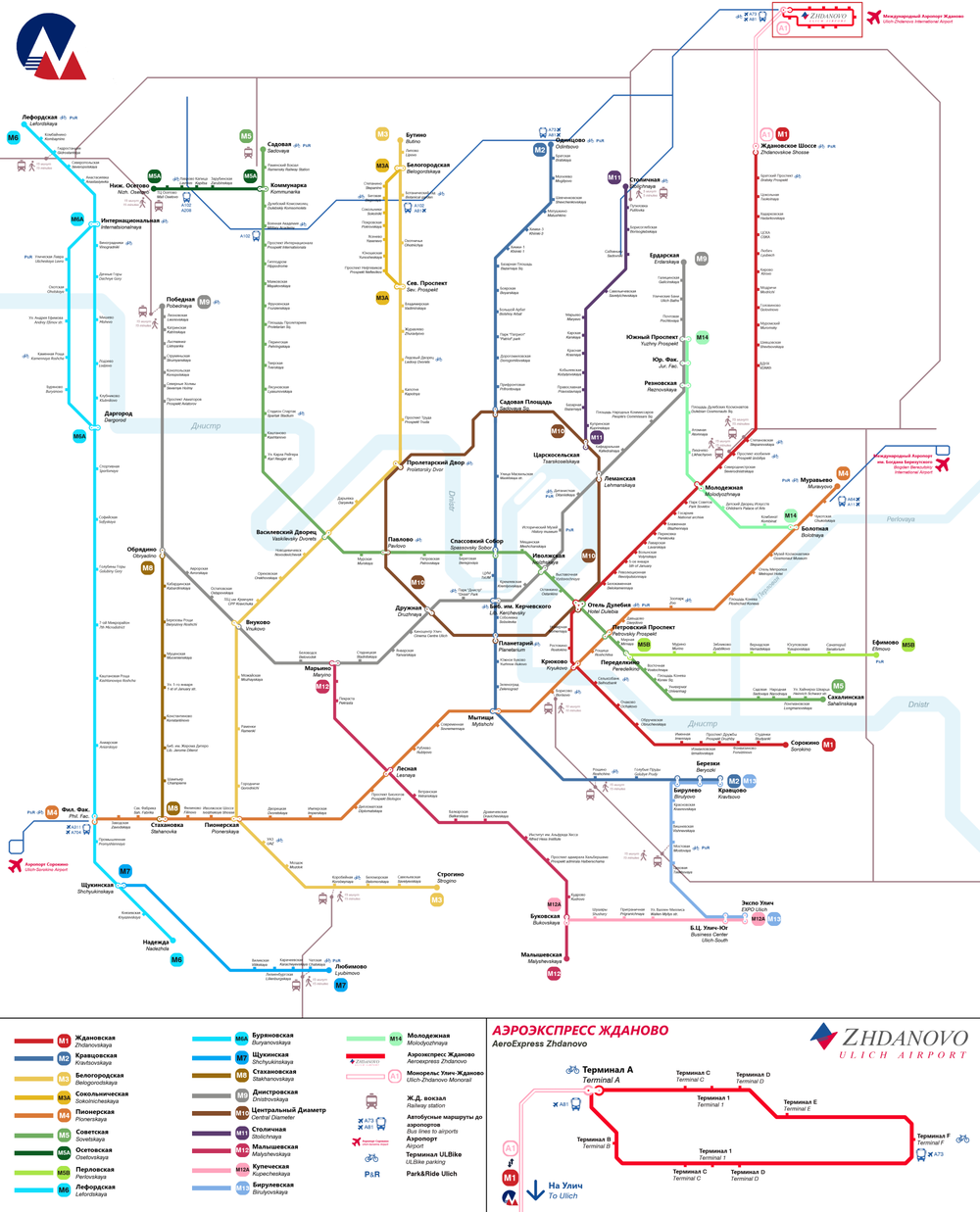 Map of the Ulich metro, including Zhdanovo AeroExpress and Ulich-Zhdanovo monorail, as well as airport bus lines and notable commuter railways, as of 2020. 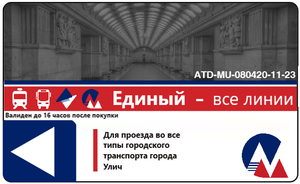 One-day disposable ultralight card. It can be used for all types of mass transit in the city.

Since 2014, the Ulich metro switched completely to disposable ultralight plastic smart cards. The price for a single fare is set at Ћ2 ($0.90). Discounts are provided for students and eldery people. Each station is equipped with a box office at the entrance near the validators, and most stations also have automatic vending machines. Apart from that, up to 10 fares can be purchased via SMS from phones equipped with NFC technology SIM cards. Each card should be validated upon entry, and the validators have time-delay, with each card being unable to be validated for 15 minutes after the first validation.

Depending on the type of the ticket, it can have a set expiry time of 16 hours (1 trip and 1 day tickets) or set number of fares (regardless of the number of transfers during one trip, unless the user leaves the metro). The metro offers weekly, monthly, and yearly subscriptions. Disabled passengers can use their social cards to ride the metro for free. All stations also offer payment via contactless card or telephone transaction, in which case the SMS confirmation is used as warranty in case of inspection by an officer.

Since 2016, the metro also offers an electronic wallet card system to its passengers. The card can hold as much as Ћ500 and should be renovated only once per year. Apart from that, the city municipality began issuing magnetic cards for one-day, one-week and one-month fares on all types of mass transit within the city of Ulich, as well as the Ulich-Zhdanovo monorail. Such cards can be purchased only on several stations, or at shopping centres and in selected banks.

Hours of operation and overnight service 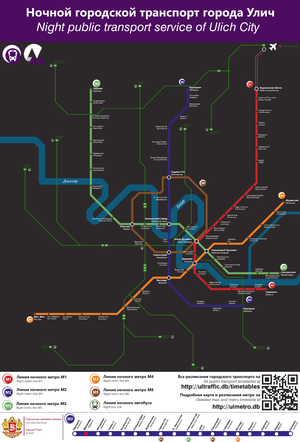 Map of the night metro lines, with the night bus service lines shown.

The majority of the lines of the metro, as well as most of its stations, operate only between 5:25 in the morning until 00:45 after midnight. Since 2017, after a reform of the public transport act of Ulich, 5 of the metro lines and selected stations on them received an additional overnight work time, with night metro trains running between 1 a.m. and 5:10 a.m.

The night metro service consists of 5 lines in total, all based on existing lines. However, on each line only selected stations work. Passengers must obtain a separate ticket to ride the night metro. This ticket also grants access to the night bus service of the city, and the Ulich-Zhdanovo monorail service, which is open 24 hours. There is only one-ride ticket, which allows unlimited number of transfers for one night, and one month subscription, for which passengers receive a separate ultralight card that cannot be used during the day. The five lines serve different parts of the city, mostly in its northern, eastern and southern neighbourhoods, while the western portion of the city is operated only by three bus lines. The night metro lines are the following: 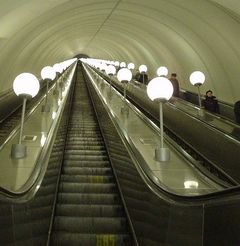 During the construction of the first nine stations of the system in 1909, accessibility was taken into consideration. All stations were equipped with several lifts, each being able to transport as many as 10 people. Lifts were staffed and decorated with cast iron ornaments. The number of lifts on each station varied, with station Imperskaya (currently named Rostokino), was equipped with 5 lifts, as it was expected that this station would see the most traffic. The Ulich metro was equipped with an escalator for the first time in 1912, when two were installed on station Parkovaya (now Hotel Dulebia), but were later demolished when the station saw its reconstruction under Soviet authority.

With the advent of the new Soviet architectural school, accessibility for disabled citizens was faded into the background, with the main focus being paid at monumentalist architectural forms and shapes. Early post-civil war stations in the system were built close to ground level, where Dulebian engineers evaluated the necessity of lifts and escalators as minimal. Stations were instead equipped with grand staircases made of marble or granite, and cumbersome metal constructions were viewed as unneeded and were also strongly opposed by both architects and officials. While with the progress of time stations were built deeper and deeper into the ground, escalators and even lifts were still widely opposed by most Dulebian architects working on the project, leading to situations when even major hubs like station Hotel Dulebia, a multi-level underground complex, was left without any back-up constructions for disabled citizens.

During the 1950s and 1960s, some major changes were implemented in the methods of construction of mass transit on the country. Complex decorations and expensive materials of the classicist era were substituted by basic, often cheap materials with little attention to detail, and a bigger focus on the functionality of the stations. During that era, stations for the first time started to receive escalators, and the presence of these constructions was standardized. Numerous old stations also received escalators. Lifts, however, were still a rare sight in the system, as they were both unreliable and required a big amount of energy and maintenance to operate daily. Even the old lifts on stations dating from the imperial period were removed. The biggest part of the system was built in the period between 1950 and 1989, and thus more than 70% of the stations in the system were opened without little-to-no lifts in their original projects.

Since 1990, Ulich metro has been undergoing a renovation process, with the main target of making it easier to access by citizens with limited mobility. At first, stations that were considered major hubs, then most transfer stations, and in the end stations that see major daily traffic were equipped with new elevators, escalators, and other systems. Still, currently, only two-thirds of the stations in the system have renovated accessibility systems, and less than the half can be considered wheelchair-accessible.

Retrieved from "https://iiwiki.us/mediawiki/index.php?title=Ulich_metro&oldid=230707"
Categories:
Hidden category:
This page was last edited on 26 July 2020, at 17:33.
Privacy policy
About IIWiki
Disclaimers