The Vinalian Superliga (Soravian:Виналійська Суперліга), or simply Superliga is the highest division of Vinalian annual football championship. It was formed in 1997 do to the merge of the Northern Vinalian First League, and the Southern Vinalian Sporting League, which had remained separated following Vinalian Unification. In 1997 the top 7 teams of each league entered into the Superliga, with the remaining teams (7 Northern, and 5 Southern) would enter the Super Combine.

Teams play each other twice for a total of 28 matches, the team with the best record wins the league. The top 8 Teams classify for the Novikov Cup, a country wide playoffs for the cup of which the Superliga gets the most slots. Teams currently part of the Superliga have won all 37 times the cup has been been disputed, most recently in 2019 when the Orlavo Red Stars won it.

The top teams of the Superliga are the historic teams of F.C. Velkarichka and the Orlavo Red Stars which were on their own respective leagues the best teams, the Chervona Coyotes are a team of great success in recent years but with little success before the Superliga, the F.C. Jangorod are the only team to win the Superliga without having previously won a First or Sporting League title when they won the league in 2017.

Ideas for creating a unified Vinalian league had existed since the establishment of the Novikov Cup in the early 80's, but the involved economical risk and the ever present threat of war breaking out between both Vinalia's, as was the case in 1987 which saw the Novikov Cup cancelled for 3 years, remained an unsolvable problem. When Vinalian reunification was achieved calls for the unification of both nations football pyramids was called for, but reluctance over the issue of franchise ownership (most Southern teams were owned by a private entity, while Northern teams tended to be owned by different groups sometimes the cities they played in), and the issue of team allocation as Northern teams advocated for greater quota of teams based on more teams in their First League, and better international and inter-Vinalian playing records which was rejected by Southern teams. 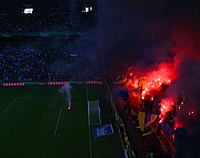 In 1992, over continued disagreement and following the breakout of violence between fans of the F.C. Velkarichka and the Orlavo Red Stars at the finals of the Novikov Cup the main teams of South and North Vinalia respectively, and the ensuing riots in Orlavo following the defeat do to a highly controversial penalty kick, forced the government to intervene on the subject. But disagreements kept the First and Sporting League separated, but the expansion of the Novikov Cup to include the top 4 teams of each league in a league type format in 1994, eased the tension and removed the immediate need for the unification of both systems.

In 1995 the government of Vladyslava Danylivna, held talks with leaders and owners of both leagues, who insisted that both leagues should merge as soon as possible. Although owners remained skeptical they agreed to creating a unified second level league, the Super Combine the following year which would serve to test out concepts and ideas before a 1997 planned merge. The Super Combine proved successful in its year of operations, and despite reluctance the owners agreed to a unified league for the 1997-1998 season. A 3rd level league, the United League was to be created the following season to maintain the Super Leagues structure, as teams were relegated from the top two Vinalian leagues. The top 7 Teams from each league would create the Superliga. The original 14 teams, sometimes called the "Originals", are the Orlavo Red Stars, and Catherinsk Tigers 1997-1998 champions in their respective leagues, the Morechia Foxes, and F.C. New Samistopol as the runner-ups, and 3-7 places. Out of the 14 teams, all 14 played at least 5 seasons in the superliga, and all remain operational, although the Tajinsk Mountain Lions have played in the United League since 2012.

The first years of the league saw the success of the top teams of each former league the F.C. Velkarichka, Catherinsk Tigers and the F.C. New Samistopol, and the Orlavo Red Stars dominating the league between 1997 to 2005, when only 3 times did other teams crack the top 3 most prominently in 2003 when the Morechia Foxes would win the Superliga, their only victory. Fedir Eduardovych became the first top goalscorer for the league following his successes in the Sporting League, leading the superliga in goals scored from 1999-2000 to 2003-2004, coming within one of the 2004-2005 winner Danylo Sheremet. Both are 1st and 2nd in all-time goalscorers for the Superliga, with Edyardovych setting in 2003-2004 the highest goals total at 27.

Northern teams suffered from poor performance, as Southern teams became highly competitive in the free market, and the development of prospects, foreign players were also offered higher bonuses from Southern teams, and the Northern teams were put at a disadvantage. Following traditional Northern teams being relegated such as F.C. Vulaninsk in 2008-2009, and F.C. Orlavo in 2010-2011, teams such as the Casimirsk Monkey's and Chervona Coyotes received renewed support. The Coyotes had been the flagship Northern team with strong seasons, and a deep prospect pool, they were the first Northern team to win the Superliga since 2002-2003 when they won in 2009-2010 under a high scoring season by Yurik Shevchenko.

The Red Stars had come under new management in 2008-2009 following disappointing seasons, coming under control of legendary Red Stars player Yaroslav Herasymenko, under his guidance the Red Stars would become highly aggressive in the acquisition of prospects and free agents landing highly valued Vinalian-Dezevauni prospect Sanzo Vukovenic in 2010. Vukovenic would clash into the Superliga stage setting rookie goals, and assists records in his first season in 2011-2012, leading the Red Stars to 3 consecutive titles, with himself being the top goal scorer for 5 years straight.

The F.C. Velkarichka would in 2014-2015 defeat the Red Stars following a 3-2 game at the end of the season between the two. Since the victory the F.C. Velkarichka and Red Stars have struggled to secure another victory do to the rise of the Chervona Coyotes, and F.C. Jangorod with the Coyotes winning 3 out of the 4 previous seasons.

Historically the Orlavo Red Stars had been the premier team of North Vinalia, and F.C. Velkarichka the premier team of South Vinalia, the first time both teams played each other was in 1959 when two exhibition matches were played between the two with the Orlavo Red Stars winning both. Both teams would hold this informal matches in 1959, 1960, and 1969, with the teams splitting them at 3 a piece. With the establishment of the Novikov Cup in 1980, both teams would meet in 1980, 1981, 1985 and 1989, with the Red Stars winning 3 out of 4, losing in 1989. With Vinalian reunification around the corner, the political environment in which the matches were played was exchanged, for attempts at unification. Both teams would meet in 1994 for the 1st time since reunification, leading to large scale riots in Orlavo after a controversial penalty was called against the Red Stars leading to the game winning penalty kick, they would meet again in the Novikov Cup for 3 straight years starting in 1997, with the F.C. Velkarichka winning all 3 series including the finals of 97, and 99.

Since joining the league the rivalry has only increased, with the Red Stars and F.C. Velkarichka usually contesting the league title as was the case in 2014, and 2015, as both teams always play their final game against each other since 2001, the rivalry has a become a hotspot with the deployment of riot police, and sometimes of the People's Guard to prevent violence between protesters, which lead to a 2015 decision to ban the attendance of away fans to games which has removed some of the violence between both clubs.