Ravnia fought on the side of the Entente during the Great War, this was mainly due to its good relations with Gaulica. Furthermore, many Ravnian statesmen wanted to see Ravnia assert itself as a great power in Euclea, and these men concluded that the best way to accomplish this was to expand Ravnias northern and eastern borders. Even Alex (Алекс) IV, Ravnias last monarch, was eager to see the nations borders expanded. This expansionist mindset would see the downfall of Ravnia and its monarchy after six years of fighting in the Great War. 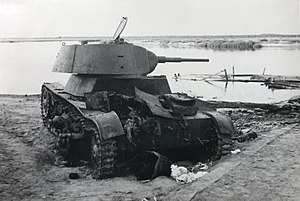 The Great War saw Ravnia fighting on two main fronts, the Narozalican and Tengarian fronts. The front with Tengaria was focused around the hills by Lake Min, with Ravnian forces entrenched in static defensive lines. The Tengarians were able to make advances into Ravnian territory in the early years of the Great War this was also the front that saw some of the final uses of Ravnian cavalry, but this front would not last long, as Tengaria capitulated to the Amathians in 1930. The front with Narozalica however would last the entire war, with the bulk of Ravnias armed forces being focused on that front. The fighting on the Narozalican front, or the Northern Front as it was commonly called, changed drastically from the start of the war to the end of the war. At the start of the Great War many leaders in the Ravnian Royal Army still upheld and practiced 19th centaury battle tactics. These included trench warfare, mass infantry assaults', and static defensive lines. These tactics quickly proved to be ineffective, with the Ravnian Royal Army taking heavy casulties in the first year of the war, these outdated tactics would not be changed for more modern tactics until early 1928. Ravnian tactics from 1928 onwards placed a great emphasis on motorized and mechanized transportation for infantry as well as a relatively new military invention, the tank. For Ravnia, much of the war was a back-and-forth battle with Narozalica, with Ravnian forces making gains, and quickly losing those gains to a Narozalican counter attack. By 1929, Ravnia had pushed deep into Narozalican territory, this however had cost Ravnia heavily, with supply lines being stretched thin. 1929 saw the war turned against Ravnia, with Narozalican forces lauching a series of attacks and counterattacks against Ravnian forces. These assaults broke through Ravnian lines and caused a general route amongst Ravnian forces. By 1933, most of northern Ravnia had been seized by advancing Narozalican forces, and King AlexIV was forced to surrender. 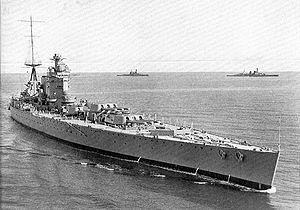 The Ravnian navy, unlike the Army and Army Air Force, saw limited combat during the Great War. This was primarily due to the blockade set up around Ravnia by the Grand Alliance, primarily Narozalica. This blockade starved the Ravnian people, with all supply ships heading twords Ravnia being either sunk or turned away. The Ravnian navy spent much of the war escorting supply ships through the blockade with blockade runners (destroyers, frigates, and light cruisers primarily). This however was ineffective, with few supply ships making it through the blockade. This culminated in the Battle of Novigrad Harbor which saw most of Ravnias heavy ships (Battleships, battlecruisers, and heavy cruisers) damaged or destroyed. The battle took place on June 14th, 1930 when the 1'st heavy warship division consisting of six battleships, two battlecruisers, four heavy cruisers, and four destroyers left Novigrad harbor. The division was attemping to sail out and behind the Grand Alliance blockade in order to attack blocakding ships north of Novigrad. This did not happen, as the divison was spotted by a Narozalican destoyer, and was later intercpeted by a Narozalican battlefleet. The ensuing battle lasted for five hours and saw the destruction of three Ravnian battleships, including Ravnias flagship, one battlecruiser, two heavy cruisers, and one destroyer. This defeat destroyed any hopes the navy had in breaking the blockade around Ravnia, as well as their hopes to defeat the Narozalicans at sea. The Ravnian fleet took part in one other notable engagment before the Battle of Novigard Harbor, this engagment saw a small force of Ravnian destroyers and cruisers intercept several Tengarian ships. It was through this engagment that Ravnia was able to capture the Tengarian emperor, who was subsequently held prisoner in Ravnia until the nations defeat in 1933.

Ravnian politics is split between two main political parties, the National Conservative Front (NCF) and the Ravnian Socialist Front (RSF). The NCF and the RSF have largely differing views on how the Republic should be run. The NCF believe that Ravnia should remain a Federal Parliamentary Republic, the market should remain a mixed economy, and that Ravnia should hold on to tritonal values. The RSF on the other hand believes that the Republic should become a Direct Democracy with all Ravnian land holders getting an equal vote in the parliamentary elections, they also believe that the market should fall under government jurisdiction in order to safeguard the rights of the working class.

Ravnia is a Federal Parliamentary Republic, with primary legislative organ being the Ravnian Parliament. The size of Parliament is determined by the populations of Ravnias six states, which are counted every 10 years by the census bureau. This has caused parliaments size to fluctuate over the decades, with its largest size consisting of 530 MP's, and its smallest size consisting of 290 MP's. Parliament's current size sits at 320 MP's. The Ravnian government is led by the Presidency, with the current President being President Pyotr Abramov. A Presidential term lasts for eight years, and there is no term limit for the Presidency. The office of the Presidency holds Ravnias executive power, with the President being able to VETO any legislation presented by Parliament. The Presidents VETO power is not absolute, with Parliament being able to overrule a Presidential VETO with a 2/3 majority vote to pass the legislation a second time. 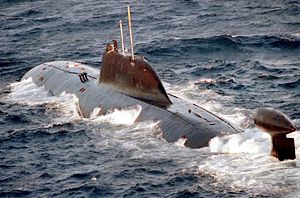 The Ravnian military is a large and respectable fighting force, and while it has been relegated to a more defensive role in recent decades, it does possess the ability to carry out offensive actions. The Ravnian Armed Forces (RAF) is divided into two main branches, the Ravnian Army (RA) and the Ravnain Navy (RN). Ravnains air force, the Ravnian Army Air Force (RAAF) is not an independent military branch, rather it is subservient to the RA. The RAF, as mentioned earlier, is a large military force. With the total number of active service men in its ranks sitting at 100,000 men, with around 400,000 men in reserve. 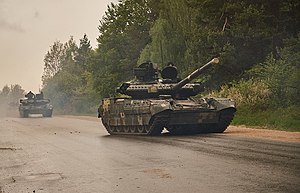 Two Ravnian T-25's. The T-25 is Ravnias Main Battle Tank and makes up the bulk of the RA's tank corp.

The RAF, while being one of the larger militaries in Euclea it is not the most advanced, with most of the militaries equipment being dated to the late 1990's and early 2000's. This puts the RAF at a disadvantage when compared to other nations militaries such as its neighbor Narozalica. The largest of the RAF's branches is the Ravnian Army (RA). The RA is a mechanized army, fielding a large number of MBT's, APC's, self-propelled Howitzers, etc. The Ravnian Army Air Force (RAAF), Ravnias army-subordinate air force currently fields around 180 aircraft. 15 of these aircraft make up Ravnias strategic bombing force, which was mothballed in 2012. This brings Ravnias number of active aircraft to 175.

The Ravnian Navy (RN) is the smaller of the RAF's two branches. The RA currently fields around 50 ships, it does not operate any aircraft carriers or Amphibious assault ships. Instead, the RN is mainly comprised of patrol craft. The RN also fields a small submarine fleet comprised of four Hunter (Охотник) class attack submarines.