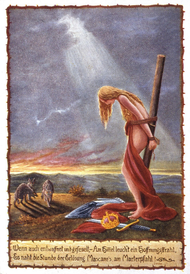 Cuthish–Mascyllary enmity (Cutho-Waldish–Mascyllary or Cutho–Mascyllary hateship) (Cuthish: X, Hesurian Kusisch–maskillische Feindschaft), famously known as Erbfeindschaft, was a concept and idea of unavoidable hostile and waring relations between the Mascyllary and Cutho-Waldish people, arising in the early 18th century with the partitions of Cuthland and a row of subsequent conflicts. How the Cuthish dealt with Mascylla after the Cutho-Mascyllary Wars have also alienated the Mascyllary with the forced signing of the Lindenau Accords in 1906, which prompted sworn vengeance. Driven by mutual revanchism and ultra-nationalism, Mascylla would go on to openly confront Cuthland politically and economically, making in an important factor in the Great War, Great Game, and X. After the collapse of the communist bloc in the 1990s, relations eased and warmed and yet remain the key to long-lasting peace in Telmeria and Berea.

Presented by author Markus Aschfahl in 1857, it describes how the geography of both nations reinforce a possible chance of regional hegemony, and thus are forced to compete and rival over it. Despite his detailed work, reasons for the rivalry are not uniform and have been mulitply interpreted. Factors such as cultural, linguistic and political differences have been raised as possible causes, though others see its origin in the semi-personal relationships of the respective leaders of the monarchies.

Historical context of the Erbfeindschaft thesis

Antiquity and the Middle Ages

End of the Erbfeindschaft: after 1989

Retrieved from "https://iiwiki.us/mediawiki/index.php?title=Cuthish–Mascyllary_enmity&oldid=237716"
Categories:
This page was last edited on 13 August 2020, at 17:41.
Privacy policy
About IIWiki
Disclaimers