Cuthland-Waldrich is a multinational state consisting of the two autonomous constituent states of Cuthland and Waldrich, each with its own distinct ethnic identity. The Cuthish are the country's largest ethnic group and constitute a slim majority of its population at 51.0%, followed by the Waldish at 35.3%. Notable Rethish, Widdalian, and Fawstonian communities are also prevalent. This ethnic diversity forms the basis for Cuthland-Waldrich's unique structure, which splits many institutions between the two states. The country is officially multilingual, recognizing both Cuthish and Waldish as official languages while Rethish, Widdalian, and Fawstonian enjoy regional status. Kingsham, the country's largest city and the state capital of Cuthland, serves as the federal executive and administrative capital, while Grienfjild, the country's second largest city and the state capital of Waldrich, serves as the federal legislative and judicial capital. Other major cities include Whitford, Stanbridge, and Wesselstêd.

Hesurianic peoples from Erdara first settled in the Cutho-Waldish Peninsula during late antiquity. Although initially divided into various petty kingdoms during the early middle ages, by the 11th century the entirety of the Peninsula was controlled by the Kingdom of Cuthland and Kingdom of Waldrich. In 1444, Cuthland and Waldrich were brought into a personal union under Edwin III of Cuthland, establishing the Cutho-Waldish Realm. The Terms of Union in 1560 further integrated Cuthland and Waldrich into a dual monarchy, effectively establishing the first unified Cutho-Waldish state. The Realm reached its height during the 17th and early 18th centuries, achieving great prosperity through trade between the nations of Cardia, Erdara, and Hallania. The country entered nearly a century of decline following the Crisis of 1715, culminating in its annexation by Cornicae in 1811.

Cuthland-Waldrich remained under Cornice rule for nearly 132 years, a period now known as the Era of Subjugation in the country. Cornicae began to weaken after the Continental War, resulting in rising Peninsularism that sought to reunite the territories of the former Cutho-Waldish Realm into a new state. The empire's dissolution in 1943 resulted in the emergence of independent states in Cuthland and Waldrich for the first time in centuries. However, lingering economic malaise from the collapse resulted in hyperinflation and further sociopolitical instability, allowing Peninsularists to sweep into power in both nations through a series of uprisings during the winter of 1943 and 1944. These new governments signed the Treaty of Wesselstêd in June 1944, reunifying the two for the first time since the Cornice annexation.

Modern day Cuthland-Waldrich is governed as a federal dominant-party diarchic directorial republic. The Union of Farmers, Laborers, and Shopkeepers (UFLS), has remained the dominant party in every level of government since reunification, largely due to constitutional restrictions on political expression that have led observers to label the nation as a hybrid regime. Cuthland-Waldrich is a founding member of the Mageiros League and also possesses membership in the Assembly of Nations. It is a developed country, boasting a high standard of living and diverse mixed economy regulated through protectionism and competition law. Scholars have characterized the country's social, political, and economic structure as Hartnellist, named after pan-nationalist leader Gerrit Hartnell whose populist and nationalist ideas shaped the formation of the modern Cutho-Waldish state. 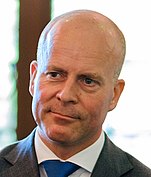 Ale Dykstra
Foresitter from Waldrich since 2014

The political framework of Cuthland-Waldrich was established by the nation's current Constitution, ratified in 1945. It is structured as a federal diarchic directorial republic with a unique division of power that reflects its status as a multinational and multicultural state. Cuthland-Waldrich's two constituent states, Cuthland and Waldrich, are granted substantial autonomy over their internal affairs, and most of the federal political institutions are divided between the two states.

Legislative power is vested in the bicameral Parliament (Cuthish: Wittenmoot, Waldish: Wittenmoet), which consists of the House of States (Cuthish: Huse of Rices, Waldish: Ryktenshûs) and House of Burghers (Cuthish: Huse of Burgers, Waldish: Boargershûs). The House of States is the upper house, consisting of 100 seats evenly divided between the states. Members are elected to staggered four year terms, with half of the seats up for election every two years. Constitutionally, each state determines its own method of filling its allocated seats in the House. In practice, however, members from both states are elected through a nearly identical process by the respective state legislature. The House of Burghers is the lower house, consisting of 223 seats (220 minimum + 3 overhang) allocated based on the population of each state. All members of the House of Burghers are directly elected every two years by mixed-member proportional representation. Half of the seats are elected by equally populous single-member districts using single transferable voting, while the other half are elected statewide by an open party-list with a 5% electoral threshold in order to balance out the seats proportionally by party.

The executive branch is diarchic, consisting of two Foresitters (Cuthish: Foresitters, Waldish: Foarsitters) who collectively serve as head of state and head of government. They are elected by a joint session of Parliament to two year terms. One Foresitter is elected from each state, chosen from a list of five candidates nominated by their state's legislature. The Foresitters hold the reciprocal right to veto, and no executive decision is considered official unless both have consented. One Foresitter is always considered to be "protecting" (Cuthish: warding, Waldish: beskerming), a position which rotates between the two on an annual basis. The protecting Foresitter is considered to be primus inter pares, and has the ability to make emergency decisions during times of national distress without first consulting his counterpart. The Foresitter who is not protecting may veto an emergency decision at any time, and must be consulted by the protecting Foresitter within 30 days of its enactment. The current Foresitters are Clifford Goodwin (protecting) from Cuthland and Ale Dykstra from Waldrich.

Cuthland-Waldrich's highest court is the High Court (Cuthish: Hih Þing, Waldish: Heechgerjocht), which is the final court of appeal in the federal judicial system. The High Court consists of 7 justices, who are appointed to 14 year terms staggered every 2 years. Appointments for all federal justices are proposed by the Foresitters, and must be confirmed by a two-thirds supermajority vote of a joint session of Parliament.

Cuthland-Waldrich operates under a dominant party system, with the populist and pan-nationalist Union of Farmers, Laborers, and Shopkeepers (UFLS) maintaining power in every federal and state election since 1945. Other political parties with federal representation include the left-wing Democratic Alliance for Reform (DAR), center-left Liberal Progressive Party (LPP), and right-wing Dísitrúar Union (DU). Following the 2019 elections, the UFLS holds a supermajority in both houses of Parliament.

Cuthland-Waldrich has been described as an illiberal democracy by observers. The 1945 Constitution places heavy regulations on the formation and activities of political parties, notably banning movements that advocate certain stances and objectives from engaging in the electoral process. Additionally, the voter registration process is highly complex and restrictive. Prospective voters are required to fill out a lengthy application and appear before a local Electoral Conduct Board (Cuthish: Walish Bearing Board, Waldish: Ferkiezingsgedrachsbestjoer), with supporting statements from two currently registered voters who can vouch for the applicant's status as a "hard-working and upstanding member of society". A 2011 study on global political freedom by the Assembly of Nations stated that institutional barriers to competition have made Cuthland-Waldrich a de facto one-party state, with the UFLS holding "nearly uncontested authority" over the nation's sociopolitical institutions.

Cuthland-Waldrich is linguistically diverse, and maintains a policy of official multilingualism at the national level.  The Constitution establishes the responsibility of the federal government to protect the nation's linguistic heritage, recognizing Cuthland-Waldrich as the homeland of the Cutho-Waldish languages. Both Cuthish and Waldish enjoy official language status, and serve as the primary native languages in Cuthland and Waldrich respectively. Cuthish is the most widely spoken language in the country as the native tongue for 55.9% of the population, followed by Waldish at 36.2%. The federal government is legally required to provide all services in both languages, which is overseen by the Office of Linguistics within the Ministry of Cultural Preservation.

In addition, several minority languages native to Cuthland-Waldrich are recognized as regional languages. Regional languages are constitutionally protected, and the state governments are mandated to ensure that they receive equal and co-official status in their respective cultural regions. All local and state government services in minority regions must be multilingual, including road signage, school instruction, and legal proceedings. These regional languages include Widdalian in Widdal, Fawstonian in Heihfirthshire and Stanworthshire, and Rethish on the Island of Reth.

As a result of Cuthland-Waldrich's unique linguistic situation, language instruction is heavily emphasized in the educational system. All students nationwide are required to study both Cuthish and Waldish, with those in minority regions receiving further instruction in their regional tongue. The nation consequently has extremely high rates of bilingualism and trilingualism, with nearly 95% of all citizens claiming the ability to speak more than one language.

Linguistic purism is a major political issue in Cuthland-Waldrich. The purist movement began with a series of language reforms during the Peninsular Fervor, in which Peninsularist revolutionaries reverted many of the changes that had been imposed on the Cutho-Waldish languages under Cornice rule. These reforms saw the establishment of regulatory agencies within the federal government over the use of Cuthish, Waldish, Rethish, and Widdalish, which largely focus on removing Latin loanwords in favor of terms derived from Hesurianic roots. The continued use of the Latin script has been a point of particular contention in recent years, with many hardliners pushing for a return to the runic script used prior to the Cornice period.

Retrieved from "https://iiwiki.us/mediawiki/index.php?title=Cuthland-Waldrich&oldid=199791"
Categories:
Hidden category:
This page was last edited on 2 May 2020, at 05:21.
Privacy policy
About IIWiki
Disclaimers