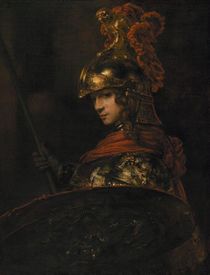 Mascane or Mascana (Hesurian: Maskane; pronounced: [mas'kɐn] is the national personification of the Crowned Republic of Mascylla, introduced in the years of its founding in the War of the Five Kings, as a personification of warfare, self-determination, wisdom, and liberty, and a portrayal of the Goddess of Liberty and Goddess of War.

Mascane is displayed as a prone symbol in various places in Mascylla, especially places of significance: holding places of honour in government and communal buildings, as statues and monuments, most notably as The Rider of the Republic overlooking the Volksplatz, and as portrayal to various objects. It is printed on banknotes, engraved on coins, featured on postage stamps, and sometimes depicted on government documents. Mascane as a personality and icon is one of the most prominent symbols of Mascylla. She is also described as a significant republican symbol, especially after the Mascyllary Revolution, but also beforehand in the Mascyllary Kingdom. As such icon Mascane represents the opposition to authoritarianism and the supremacy of democracy and self-determination against all forms of suppression. She is part of a limited set of Mascyllary symbols: the flag, the coat of arms, the national motto Hir Stehen Wir, and the national anthem Geeint in Blut und Schwur.

Retrieved from "https://iiwiki.us/mediawiki/index.php?title=Mascane&oldid=199828"
Category:
This page was last edited on 2 May 2020, at 09:00.
Privacy policy
About IIWiki
Disclaimers