The 2022 election for the Shangean legislative council was held across the month of January 2022. Voting took place for 700 of the 750 seats in the legislative council. It is the first national election to be held since the start of Normalisation in 2017.

The election saw the governing Society for Restoring Benevolence win a supermajority of both the vote and seats.

Shangea holds elections every five years for 700 of the seats in the Legislative Council (550 elected by universal suffrage and 150 elected through occupational constituencies). Voting for the directly-elected seats is done through a single non-transferable vote system with multi-member electoral districts ranging from 2 to 7 seats. Occupational constituencies use single-member plurality voting.

Voters were given a single ballot paper for district seats. Voting is either done by paper or through electronic voting in certain localities. Ballots are deposited in clear boxes and voters must dip their right thumb in ink after voting in order to deter electoral fraud. Shangeans living overseas can vote in either the embassies and consulates, mobile polling stations, or by post.

Voting is staggered over two weeks and held in five stages with different provinces voting during these sections. Voting during each stage lasts from 7AM to 11PM. Campaigning and polling is strictly prohibited during this period. The National Electoral Bureau must release the results of the election 14 days after the final polling stations close.

The National Electoral Bureau announced in December 2021 that 497,859,377 people were on the electoral roll. There are 553,177 polling stations averaging about 900 voters per station. Around 4,500,000 individuals and 14,507 companies vote in occupational constituencies. 28 million people are involved in the running of the electoral process consisting of election officers and polling station guards. A budget of €3.2 billion has been allocated to hold the election.

The last Shangean election was held in 2017 being the first snap election in Shangean history being held as a result of the 2016-17 Shangean Protests. The elections saw the incumbent ruling party, the Society for Restoring Benevolence lose a significant amount of seats and votes despite retaining a majority in the Legislative Council. The results were widely suspected to have been influenced by electoral fraud including ballot stuffing, invalidation of ballots and tampering electronic voting systems with the opposition Democratic Action Alliance (DAA) calling for the Judicial Council to declare the election results as invalid. When the Judicial Council president Yi Shaoqing certified the results as valid the protests intensified. This led to the Shangean government to order a mass crackdown on the protesters on the 28th January and introduce a series of purges against perceived dissent in Shangea. Terming the process Normalisation (Shangean: 拨乱反正; bōluànfǎnzhèng, literally meaning "eliminating chaos and returning to normal") up to 100,000 people were arrested and a further 300,000 dismissed from their jobs.

On the 4th February 41 opposition legislators including the DAA leader Hu Wenjuan and protest leader Chen Qianshi were detained by the Shangean government on sedition charges. The Shangean government also banned the Path of Democracy political party for terrorism with co-leader Kang Yongqing fleeing to Senria. These actions led to the the member parties of the DAA to resign from their seats in the Legislative Council in protest, leaving the Legislative Council without any opposition (dangwei) representation. On the 23rd April 2018 the main dangwei party, the People's Party, re-elected Hu Wenjuan as their leader despite her continued imprisonment leading to the National Electoral Bureau on the 1st June barring the member parties of the DAA from contesting national elections on the basis of "failing to apply by electoral standards".

A partial relaxation of Normalisation measures was made on the 13th May 2018 when the state of emergency declared on the 29th January 2017 was repealed, which also ended an association curfew, the ability to police to search houses without warrants and liberalise some media controls. On the 10th August 2020 State Chairman Yuan Xiannian announced that Normalisation measures would not be renewed for 2021 and that the government would introduce a new National Security Law and constitutional revisions to institutionalise aspects of Normalisation. The constitutional reforms including merging the semi-autonomous anti-sedition courts into the existing judiciary system, moving appointment of judges to be solely the purview of the Judicial Council with approval from the State Presidium and transferring powers from Ministry of Justice to the Judicial Council and the State Presidium. The constitutional amendments also made it illegal to insult Shangea, the Shangean nation, Shangean government institutions, or Shangean national heroes such as the Jianzhao Emperor or Lu Keqian. The reforms also imposed a five year term limit for the premier, vice-premier, ministers and the President of the Legislative Council which can be renewed once and will take effect upon the elections for the Legislative Council in 2022. The reforms were passed by the Legislative Council on the 17th January 2021 and received approval from the State Presidium the next day. 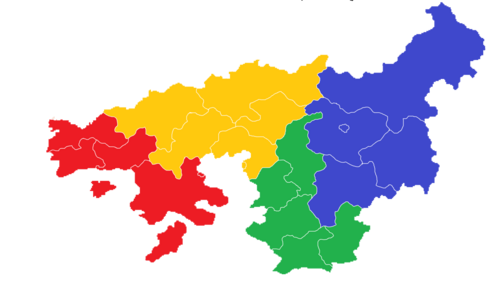 As a result of constitutional reform in 2021 to register for elections in Shangea strict limitations for parties have been introduced. Parties can only run for the Legislative Council if they operate nationally; that is run in all provinces of Shangea (with the exception of Jindao) and have membership in all provinces. Provincial parties must have at least 5,000 members. All parties must be approved by the Examination Council. Additionally, all parties have to abide by the "Five Cardinal Principles" of the Shangean nation with those being -

The Examination Council approved eight political parties to run in the 2022 election, the lowest since the 1989 Legislative Council election. The majority of these parties have been considered to be part of the managed opposition that functionally support the incumbent government; only the National Regeneration Movement list is seen to run dangwei politicians on it.