National Principlism (Xiaodongese: 国家主体主义; Guójiā zhǔtǐ zhǔyì) is a Xiaodongese political ideology that has been prescribed as the state ideology of Xiaodong since the declaration of the Auspicious Republic in 1940. Primarily formulated by Lu Keqian and Wun Jinmo drawing on legalism as its main ideological forebearer, National Principlism is a nationalist ideology that calls for an "enlightened" authoritarian and modernised state that utilises a form of neosocialism. In particular, National Principlism emphasises Xiaodong as an independent nation that must be based around a strong state based on the teachings of legalism, embrace industrialisation and a collectivist culture, condemning liberalism, individualism and private property in all forms. National Principlism also denounces both reformist and revolutionary forms of socialism, instead calling for a third way that would see the state introduce a technocratic planned economy through corrective means. 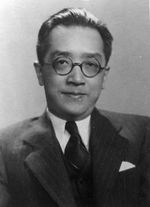 National Principlism was formulated as a reaction to the failure of the Xiaodongese government to deal with Xiaodong’s social collapse, political disunity, economic implosion and national humiliation in the aftermath of the Senrian-Xiaodongese War and signing of the Treaty of Keishi. Many Xiaodongese intellectuals began to reject the foundations of the Heavenly Xiaodongese Empire which had been founded on Ruism and nationalist principles, and later embraced Euclean ideals of scientific racism and constitutional government. Xiaodongese professor Wu Jinmo looked to Xiaodongese history to create a new ideology that would strengthen the Xiaodongese state. Wu drew on legalist concepts that had been influential under the first Tao dynasty in the 1100 under which Xiaodong won a war against Senria. Wu saw this period of legalism as the golden age of Xiaodong and that Ruism, capitalism and Euclean ideals had weakened Xiaodong and a return to strict order under a modernised legalist system - a rejuvenation of the nation - was required. Wu complied this in his 1935 book Reflections on the Senrian-Xiaodongese War and his 1938 revision Doctrine of the New Xiaodong.

These ideas were quickly adopted by general Lu Keqian who founded the Xiaodong Regeneration Society which prescribed these ideas as its ideology, calling them National Principlism. Under Lu and other ideologues the ideology became more radical, calling for a totalitarian, ultra-nationalist state with a socialist economy

A key concept within National Principlism is that of zàishēng (再生), which translates to regenerate, or to rejuvenate. In a speech in 1935, Lu Keqian emphasised that Xiaodong needed to "rejuvenate" itself as a nation stating that the Xiaodongese people had under the semi-feudal Heavenly Xiaodongese Empire been subjected to traditionalism and reactionaryism that had to moral decay, decadence and exposure to foreign ideals that had disrupted the natural harmony of Xiaodong. Thus, Xiaodong needed to sweep away reactionary practice and halt the decline of the Xiaodongese nation by creating a new powerful state that would restore Xiaodong's social harmony.

According to National Principlist thought this regeneration must be progressive in nature, destroying outdated practice and reactionaryism and create a "new state" that would be industrial and modern in nature. National Principlist theorist Wu Jinmo emphasised that "Xiaodong is behind the industrial nations in terms of socio-economic development...either we fall into ruin, are forced into adopting their barbaric practices or regenerate ourselves according to Xiaodongese customs."

Wu also stated that this regeneration would be the "final mandate from heaven". For centuries, Xiaodong had been guided under the belief that the heavens granted a king or emperor the right to rule but withdrew that right if the Sovereign was oppressive, incompetent, neglectful or failed to govern responsibly. Pen stated that following this rejuvenation of the Xiaodongese nation "a perfect equilibrium, a perfect harmony, between the heavens, the sovereign (defined by Wu as the state) and the people will be reached...there would be no need for the mandate to be passed on after this rejuvenation".

National Principlism rejects the Ruist ideal that the state should exist to instil mortality and serve as an example to the people; rather, it draws heavily on a legalist views on humanity, seeing man as inherently inclined to perform immoral actions. As a result, the state rather than emphasise that if people followed the correct morality there would be little need for a strong state should actively seek to regulate and control the people's lives. Disobedience to the state should be met with harsh punishment and retribution to enforce social order. This legalist approach has been described as totalitarian.

Although National Principlism rejects the concept of liberal democracy and supports a strong state it is not hostile to the concept of popular sovereignty. Lu Keqian in 1938 wrote that some form of popularly elected assembly that would undertake legislative duties was necessary in order for the government to remain connected to the people and the corrective revolutionary spirit. However he stated such an assembly should be made to represent "all sectors of society" and condemned parliamentarianism as leading to a clique of party politicians controlling state governance.

In 1942 with the creation of the Legislative Council elections were based on the principles of non-partisanism and sectional representation. Of the seats within the Legislative Council half were elected by voters, a quarter representing industrial and economic sectors and a quarter being appointed by the military. Although the Legislative Council could pass laws only the Executive Council and the State Presidium can propose laws, with the State Presidium having final legislating powers. Due to the empowerment of the executive the system relied on consensus between branches of government for laws to be made, with the State Presidium arbitrating the process. This led to Lu to describe Xiaodong's system as guided democracy (指导式民主). According to Lu, guided democracy was necessary in Xiaodong as the diversity of the nation is to large for it to be under a totally democratic regime and as the state has the duty to act as the moral arbiter of the nation it must be empowered to prevent corrupt party regimes and demagogues from disrupting stability and the harmony between state institutions.

National Principlist Socialism does not aim for worker control of industry, not equality - rather it sees socialism as firstly being the most efficient means to modernise the state and as a means to promote the unity of the Xiaodongese people. Wu Jinmo stated "Xiaodongese socialism describes the process of liberating the Xiaodongese people from decadence and corruption. It does not describe the dictatorship of the proletariat nor class collaboration - rather we call for the eradication of all classes and to re-establish society between the state and its subjects.".

National Principlism endorses the centralisation of state power believing that a centralised, authoritarian state is necessary for social order. Drawing on traditional Legalist beliefs Lu stated that the Xiaodongese people when exposed to liberal and individualist ideas they would become corrupt and anarchistic, and that only by the existence of a state with absolute power would societal harmony be achieved.

This form of collectivism under National Principlism saw a radical redefinition between society and the state. Lu rejected traditional social structures such as the family and instead stated that Xiaodongese citizens should submit themselves to the state alone. According to Lu, submission to any other figure than the sovereign would result in social chaos, and so the destruction of all forms of civil society as well as “private society” (i.e the family) was necessary to entrench the state’s power and result in order.

Xiaodongese political scientist Jiang Jiqing criticised National Principlism on the grounds that it was "ideologically bankrupt...National Principlism has little to offer outside bland platitudes that are stolen from other ideologies, both Euclean and Coian. It is a outdated, misplaced, irrelevant to the real needs of the people and contradictory in its approach".

Retrieved from "https://iiwiki.us/mediawiki/index.php?title=National_Principlism&oldid=308783"
Categories:
Hidden category:
This page was last edited on 7 February 2021, at 12:48.
Privacy policy
About IIWiki
Disclaimers