Amenria, officially named the Empire of Amenria (Chinese: 亚洲帝国; Indonesian: Kekaisaran Amenria), is an absolute monarchy in R1 spanning from Siberia in the north to Sri Lanka in the south and Korea in the east to Kazakhstan in the west.

Being a spiritual nation and having the highest concentration of Awakened in the world (2% of its population), Amenria is a leading country in Spiritual Studies and Superhero Education. The empire's theocratic nature also contributes to its ever-growing number of Superheroes.

Amenria's connection with God can be traced back to the Adamic Era, as Adam, Earth's first human and Muslim prophet, was sent somewhere in the Indian subcontinent following his exile from Heaven.

Although Amenria has eight official languages, with Chinese being the most dominant, the vast size of the empire and its multiethnic populace makes Amenria a multilingual nation, with languages of the Austronesian, Mongolic, Sino-Tibetan, and Kra-Dai language families.

The empire, while vast in territory, is sinocentric, and thus, an iteration of China in it's universe.

The origin of the name "Amenria" is unknown, although it has been speculated that it has connections to Tianshi's life as a human.

Amenria was the site of the Red Civilization, a militaristic Ghost nation with a lifestyle centred around metal, gunpowder, steam, and magma. It was the birthplace of Fuzanlong, the Elder Dragon of Passion.

After being exiled from Heaven, Adam was sent to India, of what is now part of Amenria's southern regions. Angel Gabriel taught him how to survive through growing crops and baking bread, before advancing to find Eve.

After Cain's murder of Abel, Adam ventured to the west to relieve his grief. In his travels, he encountered the Great Dragon that could threaten the life of his children. The two fought, with the Dragon taunting him and stating that he was too powerful for the prophet to kill, prompting Adam to separate him back into the five creatures that constituted him. The creatures fled to various parts of the world and made their homes in different biomes.

After his return, Adam had two more sons; Seth and Yafits. After reaching adulthood, each married a huri; Seth married the huri Nazala and Yafith married the huri Mauzela. For unknown reasons, Yafits and Mauzela left for the planet of New Eden after their marriage. The couple made a deal with their in-laws. Every year, a son of Earth would be exchanged for a son of New Eden. Adam's descendants with the purest Hurite heritage settled in Central and East Asia.

Shortly after the death of Adam, both the Nodic and the Hurites built space stations in Earth's orbit, as a way to observe the humans without intervening them. The Hurites' was on the moon and the Nodics' was in orbit.

In 321 BCE, an Indian prince rode across the desert, saw a glimpse of a falling space object and decided to follow it. Upon reaching it's crash site, it was revealed that the object was a spacecraft from Indraloka. The prince ventured inside the spacecraft, and ran into the dying pilot. The prince's worthiness and bestowed upon him all the technologies, knowledge, and wealth in his ship, including the material Vajra.

The prince taught his people the secrets passed on to him by the deceased pilot. Over time, the Indian people's respect towards the Indralokans grew to a point of veneration, and the people began to worship these alien benefactors.

Several individuals from both the Lordship of Nod and the State of New Eden broke their non-intervensionist clause and interacted with humans.

A Hurite known by the name of Chang'e by the Chinese was impressed when a human med Houyi shot down nine large meteorites and saved his people. She had been observing him even before his heroic feat, and eventually became captivated and married him. She gave him a sample of a popular Hurite beverage, Elixir, unaware of its adverse effects on humans. Fortunately, he did not drink it and instead asked her to keep the sample on her person. She fled back to her station on the moon following her husband's death in a conflict, reuniting with her rabbit-like companion.

Another Hurite was sent somewhere in Japan as a baby, hidden inside a bamboo. She was found and raised by an elderly bamboo cutter and his wife, and was given the name Kaguya. As she grew older, her biological parents sent her telepathic messages of her true origin, which she kept a secret. She also refused to mate with humans over fears of the danger a human-Hurite hybrid would pose to young planet, she turned away her suitors by giving them impossible tasks.

At some point in history, she attracted the attention and affection of the emperor of Japan, frequently contacting each other through letters but still rejecting his advances, stating that she was not from Japan and therefore could not be his wife. She'd later announce her Hurite heritage and revealed that she would go to the Hurite station on the moon before leaving for her home planet. She was soon escorted by her biological parents' servants and the emperor ordered his men to stop them, only to be blinded by a flashbang grenade from one of the servants. She remained in contact with her adoptive parents and the emperor before taking a sip of Elixir and attaching the bottle, still containing some of the beverage to the letter for the emperor. The emperor wrote a reply, however, burned it along with the bottle he was sent.

In later years, Elixir was taught to be the secret behind the beauty and longevity of Hurites. For centuries, many popular figures attempted to brew their own versions and drink them, thinking they would gain immortality and unaware of the fact of its lethality to humans.

Nodics mingled among, and mated with several humans, resulting in the modern earthling vampires.

Amenria is a federal absolute monarchy. Under the nation's political system, known as Tiandao, there are no political parties. In their stead are 8 (formerly 9) Major Noble Families with their own jurisdictions and home territories, with the Kirigakure Network's status as a Major Family being a secret and regarded as a subsidiary of the Ramadhan Family with special privileges by the general public. All Major Families are equal to each other save for the Ramadhan Family, the current ruling Noble Family, headed by the Heavenly Emperor himself.

While Amenria is an absolute monarchy in theory, in practice, the current monarch, Heavenly Emperor Tianshi, and his wives take on the role of chief executives in the nation's day-to-day operations. He is also the chief legislator, allowing him to propose laws and legislations. The Heavenly Emperor serves as both head of state and head of government.

The monarch, and, to a lesser extent, his wives, represent Amenria in foreign relations. He is also the Supreme Commander of the Imperial Amenrian Armed Forces and is the only person allowed to declare war, barring the bearer of Command Zero.

The legal system in Amenria is divided into two streams, Earthly Law and Cosmic Law, with Earthly Law covering secular matters such as theft, vandalism, and assault and Cosmic Law covering religious matters such as marriage, blasphemy and witchcraft. Since Shariah law cannot be applied to non-Muslims, separate courts are available for the adherents of every religion present in Amenria, with the largest non-Muslim courts being the Hindu court and the Christian court. Despite the secular nature of the crimes dealt with by the Earthly Law, it is still influenced by Shariah.

Much of Amenrian foreign policy is conducted by the Monarch, currently Heavenly Emperor Tianshi, with the Miao Coven and its Patriarch/Minister of foreign affairs, currently Miao Zeshi, having a subordinate role.

Amenria's foreign policy is generally isolationist in politics and military, both within its own Universe and in the Multiversal Community, while being internationalist in terms of trade, humanitarian aid and sentient rights.

Following The Vatican's global vampire hunt in the 2030s to early 2040s, Amenria and the Vatican signed the Olive Treaty, where the latter agreed to stop its extrajudicial killings of vampires outside of its borders in exchange for the former transferring control of the entire Italian peninsula.

Amenria joined the war against Octavia in mid 2048.

The Imperial Amenrian Armed Forces is the armed forces of the Empire of Amenria. Despite it's small size relative to it's population, it is one of the best military forces on it's Earth, which spends around $279 trillion, 10% of the nation's GDP, resulting in a highly advanced, well-trained force with the best tanks in the world. Conscription has been theoretically put on hold since The War of Dusk and Dawn, but can be reactivated by imperial decree, despite being mostly regarded as nonexistent by most. The military consists of four branches, the Imperial Ground Force, Imperial Navy, Imperial Air Force, and Imperial Guard. The Imperial Amenrian Armed Forces is generally a defensive force, only being deployed off-universe under what is deemed a Multiversal Crisis by the monarch. Even in it's own world, it does not see much conflict outside the mainland barring counter-insurgency efforts in it's colonies.

The Monarch serves as the supreme commander.

A vertical farm in Central Amenria.

With the boom of vertical farming in the mid 2020s, Amenria inherited the numerous vertical farms in various Asian cities when it was founded. The majority of farms in the empire is owned by the Poornachandra Pack, with private, family-owned farms being few and far between. 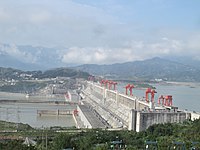 Energy is primarily produced by the Imperial Electricity Company and secondarily by individual households. Nuclear power plants provide 53% of the empire's electricity, while 40% is provided by renewable sources and 7% is provided by coal or natural gas.