The Bourgougian Blitz (17 March – 25 August 1987) was a short but intense military conflict that was fought primarily between Carloso and Agostinia against Bourgougia, who were aided by forces from Barssois and Acrary. It broke a period of relative peace and calm in Musgorocia following the conclusion of the Emergency War in 1951, with a newly resurgent Bourgougia, which had been under the control of a communist military dictatorship since 1964, seeking to press its claim on the densely populated Carlosian exclave of Victory, located on the border with Côte D'Émeraude. Victory had fallen under the control of Carloso after a war between the two countries in the 1790s. As dictator of Bourgougia, Régis Lemaigre prioritised the country's remilitarisation to realise this objective. The war began on 17 March when the Bourgougians simultaneously had Carlosian President Liam Moran assassinated by special forces and launched a massive, devastating assault on the almost defenceless Victory.

With only a token Army garrison and a small, mostly unarmed police service to defend the city, Victory was quickly overrun by the Bourgougian forces. Some units refused to surrender, performing guerrilla operations against occupying forces for the remainder of the war from the city's high-rise buildings and skyscrapers. The Bourgougians devastated the city with artillery and rocket fire before they invaded, causing catastrophic damage and killing thousands of civilians. When news of the attack reached Madrigal, Moran's successor, Adrian Miotasis, immediately declared a state of war between Carloso and Bourgougia, Agostinia following up with its own declaration several hours later. As Carloso began to mobilise and move a large portion of its military to the front line along the Bourgougian-Agostinian border, an intense air war raged in the skies above. At the same time, the belligerents' opposing navies clashed at sea, seeking to achieve naval superiority in the Musgorocian Ocean. Carloso gradually gained the upper hand, delivering a crushing blow against Bourgougia when they attempted to seize the Carlosian overseas territory of Mediator in a decisive battle.

In May 1987, Carloso and Agostinia began their counteroffensive, pouring into north-west Bourgougia with a force of over 800,000.Having exhausted many of their most capable aircraft during the initial few weeks of the air campaign, Bourgougia lost air superiority to the Carlosians, and was forced to retreat further and further into the country's interior. However, towards the end of the month, the combined offensive stalled when Barssois and Acrary entered the war on Bourgougia's side, resulting in a brutal war of attrition that would last for many weeks. Simultaneously, Carloso's naval superiority was shaken when several prominent warships were sank at the hands of Bourgougian submarines.

Seeking to break the stalemate, in July Carloso launched a daring amphibious assault on Victory, successfully liberating the city. This opened up another front in the war, Carlosian and Agostinian forces making huge gains into southern Bourgougia. Forced to divert more of their units to defend the more economically important parts of the country, efforts by Bourgougia and its allies to defend the north west began to collapse. By mid August, Carlosian forces were within 30 kilometres of the Bourgougian capital. With growing unrest at home, Acrary withdrew all its forces, followed by Barssois. The war ended on 25 August 1987 when elements of the Bourgougian Army staged a coup against Lemaigre's government, executing him and agreeing to a ceasefire with Carloso and Agostinia.

The Bourgougian Blitz has since been regarded as a watershed moment in Carlosian history, and would later have profound ramifications on the country's politics and foreign policy. A whole generation of future politicians; including current President Cárlos Tobón, would be deeply affected by their experiences during the Blitz and would come to grow in power and influence in the 2000s, culminating in the Blue Revolution of 2010. After the conclusion of the Blitz, Bourgougia quickly spiralled into a brutal decade-long civil war that would leave over five million dead. The collapse of Bourgougia also contributed to the fall of the communist regime in Barssois in 1991, and helped ignite the Acrary Civil War. The Blitz precipitated a decade of almost constant civil war; known as the Millennium Crisis, in many parts of Musgorocia as the continent's communist regimes faced open revolution and ever increasing demands for democratisation. Carloso would become involved in many of these armed struggles, either directly or indirectly.

Diplomatic relations between Carloso and Bourgougia continue to be very poor as a result of the Blitz. A formal peace treaty between the two countries was never signed. Victory would eventually be granted independence by the Carlosian government in 1995 following a local plebiscite. Successive Bourgougian governments have maintained their claim over the city-state, while Carloso continues to have a large military presence along the Bourgougian-Agostinian border. Largely due to its historical significance, the Blitz is a popular subject of literature, video games, television and film.

Following the conclusion of the Emergency War and the defeat of Synarchist Bourgougia in 1951, Carloso became the unquestioned superpower of the Musgorocian continent. While the country quickly rebuilt and experienced a prolonged economic boom, the rest of the continent remained devastated by years of military conflict. Aided by various extra-continental forces, the feeble democratic regimes in Bourgougia and Barssois were overthrown in communist military coups in 1964 and 1966 respectively, enjoying extensive popular support. These also precipitated coups in Acrary and Frontiere. These new regimes succeeded in rebuilding the cities and countryside through vast public works schemes, beginning a phase of rapid industrialisation as they sought to match the economic output of Carloso once more.

Beginning of the bombing campaign

War in the Musgorocian Ocean 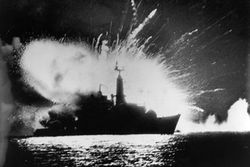 Bourgougian frigate La Rocque explodes after being crippled by an anti-ship missile.

Carloso rallied its naval forces alongside a small unit of Agostinian frigates and submarines, assembling one of the largest armadas that the continent had ever seen. Three nuclear-powered aircraft carriers were dedicated to conducting operations against Bourgougia, alongside the plethora of cruisers, destroyers and submarines.

Knowing they were outnumbered and outgunned on the naval front, the Bourgougians resorted primarily to hit-and-run tactics, attacking Carlosian warships with anti-ship missile batteries if they strayed too close to the coast. Their extensive submarine force managed to pick off a number of Carlosian frigates, patrol boats and even a handful of destroyers.

Seeking to take the pressure off of forces closer to home, Bourgougia launched a surprise attack on the Carlosian overseas territory of Mediator.

Retrieved from "https://iiwiki.us/mediawiki/index.php?title=Bourgougian_Blitz&oldid=216394"
Categories:
This page was last edited on 6 June 2020, at 15:16.
Privacy policy
About IIWiki
Disclaimers