Cárlos Montoya Tobón NA (born 7 November 1968) is a Carlosian statesman, barrister and Army veteran who has served as the President of the Executive Council of the Federal Republic of Carloso and commander-in-chief of the Carlosian Armed Forces since 11 February 2011. He is also the current leader of the National Salvation party and a former member of the Conservative Party. Tobón has served as a National Assemblyman for Tolesa, Maveira & Firosa since 2001.

Born and raised in the suburb of Firosa, Madrigal to a largely Hispanic family, Tobón served in the Carlosian Army during the Bourgougian Blitz. After the war, he studied Law at Madrigal Metropolitan University and became an active member of the Conservative Party. After working as a junior counsel for several years, Tobón was elected to the Madrigal Metropolitan Assembly in 1997. He was elected as a National Assemblyman for Tolesa, Maveira & Firosa at the 2000 general election. Tobón quickly became a noted figure within the traditionalist wing of the Conservative Party and became friendly with fellow Blitz veterans including George Spalding, Estebán Santander and Army General Régulo Moran. When the Conservatives and Democratic Party formed a coalition after the 2005 general election, Tobón became an outspoken opponent of cooperation with the Democrats. In an attempt to pacify dissent within the Party, President Montero Irisar appointed Tobón as Minister for Finance in 2007.

As Minister for Finance, Tobón tried to introduce sweeping monetary and fiscal reforms to reduce the national debt and restart economic growth. These were repeatedly blocked by the economically liberal Democrats. At the same time, the Democratic agenda of social reforms; which was agreed upon as part of the coalition agreement, saw many, more moderate members of the Conservative Party look to Tobón and George Spalding for leadership, rather than President Irisar. When the Democrats began to push for the legalisation of same-sex marriage and abortion in the run-up to the 2010 general election; eventually leading to President Irisar announcing that a referendum would be held on abortion that year, Tobón and like minded Conservative politicians formed an organised faction within the party to oppose the referendum, calling it the Alliance for the National Salvation of the Fatherland. In the aftermath of the Attorney General v. Q case, the destruction of the Supreme Court and mass rioting in the streets of major Carlosian cities, Tobón led a wave of mass resignations from the Conservative Party, co-founding National Salvation with Spalding to contest the general election and becoming a key figure in the violent Corrective Revolution.

A combination of the defections of many key Conservative figures, a military intervention led by General Moran and an attempt to flee the country by President Irisar caused Conservative support to implode, losing well over half their seats in the 2010 election, with the Democrats suffering similar loses. National Salvation achieved a shock plurality of the vote, entering into a coalition with a group of rural independents and military veterans to form a government. Tobón was elected President of Carloso, taking office on 11 February 2011, with George Spalding as Deputy President. He immediately began the process of overhauling the Carlosian economy and rolling back the social policies of the previous government, beginning a programme of reindustrialisation, implementing a distributist economic model, reintroducing the ban on divorce, stopping the state's recognition of same-sex civil partnerships and reinforcing the constitutional ban on abortion. Within a year of taking office, Tobón ordered the withdrawal of Carloso from the World Assembly (WA) after a hotly contested referendum returned a result in favour of leaving. Carloso would go on to join the International Freedom Alliance (IFA); later the International Freedom Coalition (IFC), in 2014. He inititated a wide range of administrative and legislative reforms, returning many powers to the provincial assemblies and local government, including greater responsibility for healthcare, housing and planning permission. Penalties for especially heinous crimes were severely increased under Tobón, including the introduction of capital punishment for a wide range of offences, including murder, rape, execution of an abortion and drug dealing. A total ban on the construction of land-based industrial wind turbines was also introduced.

Tobón led National Salvation to achieve a parliamentary majority in the 2015 general election, beginning his second term as President of the Executive Council. His cabinet remained largely unchanged. The first few months of his term were preoccupied with largely foreign matters, dealing with factional divisions in the IFC. He eventually ordered the withdrawal of Carloso from the organisation in March 2016, declaring the country to be neutral. At the same time, Tobón began cultivating links with members of the Santiago Anti-Communist Treaty Organisation (SACTO), including Nifon and Inyursta. In 2017 Shogun Maki Kojiro made a highly publicised state visit to Carloso, a first for a Nifonese leader. The country then became a party to the COSTAL Accords, redefining Carloso's maritime boundaries. Carloso eventually joined SACTO on 20 May 2017 after being invited by the Nifonese government, sparking international outrage. In late 2018, Tobón scored a major victory in winning a referendum on the Twenty-eighth Amendment of the Constitution of Carloso, making Christianity the state religion of Carloso with the backing of 57.72% of the electorate. After the outbreak of the deadly CaBI19 disease throughout the Southern Furukuran Sea region in early 2020, Tobón issued a directive banning travel to and from heavily affected areas, in addition to implementing heavy restrictions on all foreign travel into Carloso.

In 2018, Tobón had stated his intentions to step down as leader of National Salvation by late 2019 and not run for a third term as President, however, he has since reversed his decision and plans to seek a third five-year term as leader of the country. If successful, he will be the first individual in the republican history of Carloso to achieve this.

Tobón has been broadly described as a staunch conservative and nationalist. Since the beginning of his second term, many critics of the Carlosian government have referred to Tobón as an illberal, and authoritarian. Tobón has been accused of being a demagogue and has been blamed for the extrajudicial killing of hundreds of suspected drug dealers and sex offenders by Carlosian authorities. Carloso's shift towards SACTO in foreign policy received widespread condemnation, both domestically and internationally. Despite these claims, Tobón remains a popular political figure in Carloso, with an approval rating as high as 71% as of early 2020.

Cárlos Magaña Tobón was born on 7 November 1968 at Madrigal Metropolitan University Hospital – Saint Vincent's to Sebastián and Kaitlyn Tobón (née Parker). Sebastián's ancestors were a mix of Portuguese and Spanish immigrants to Carloso, who served as venecedors in the War of Independence. Parker was largely descended from Scottish and English immigrants who arrived in the eighteenth century. He was raised as a Catholic, though his mother Kaitlyn was born into a Presbyterian household and converted to Catholicism in order to marry Sebastián. Sebastián Tobón fought in the Emergency War as a soldier in the Carlosian Army's IV Infantry Division, taking part in the Battle of Madrigal, Second Battle of Secano and Exercise Revelation. The couple met in 1959 at a dance and went out for four years, marrying in 1963. Cárlos was their second child, his older brother Jair being born in 1965.

First years in the National Assembly 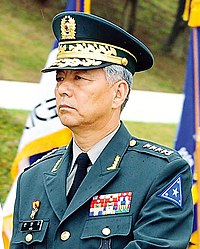 Tobón is a devout Catholic. He has an older brother, Jair Tobón, who is a General in the Carlosian Army. His younger brother, Facundo Tobón, is a National Assemblyman for Mostolt and also a member of National Salvation. He has three sisters; Diana, Magdalena and Rebeca. Magdalena is a well-known writer of political history and a regular columnist for The Madrigal Times.

Retrieved from "https://iiwiki.us/mediawiki/index.php?title=Cárlos_Tobón&oldid=217866"
Categories:
Hidden categories:
This page was last edited on 11 June 2020, at 19:40.
Privacy policy
About IIWiki
Disclaimers