The Carlosian Armed Forces (Spanish: Fuerzas Armadas Carlosenses) are the military forces of the Federal Republic of Carloso. It consists of six active branches; the Army, Navy, Marine Corps, Air Force, Republican Guard and Space Command. The President of the Executive Council, currently Cárlos Tobón, is the Supreme Commander of the Armed Forces, and formulates military policy alongside the Department of Defence (DoD). On a day-to-day basis, the Armed Forces are under the jurisdiction of the Department, which oversees the allocation of equipment and funding. It is charged primarily with the projection of Carloso's sovereign territory, airspace and foreign interests, with significant power projection capabilities. With a budget of D£471.2 billion ($961.7 billion), accounting for 5% of nominal GDP, it is the most well-funded national military force in Musgorocia followed by the Bar Armed Forces and the Bourgougian Defence Forces. It operates many bases across the globe. The Armed Forces are also the largest in Musgorocia with 2,390,533 active personnel and 2,056,512 in reserve. Although not officialy part of the Armed Forces, it holds relationships with the various provincial militias charged with local defence; these are estimated to number ?,???,??? including both active and reserve.

Since its creation as the Provisional Army in 1581, the Armed Forces have been at the forefront of Carloso's history. Drawing its heritage from the vencedores, it was the primary force behind the First Republic's rapid expansion across the continent in the early 1600s. In 1629 a coup by General Miguel Astacio de Abaroa overthrew the Republic. A popular revolution, establishing Eberado Lardizábal de Encarnacion as Emperor Cárlos I, lead to it to being reformed into the Imperial Forces. Primarily tasked with guarding contiguous possessions, it quickly developed into a colonial force as the Empire expanded across the world in the late 1600s. At home, it participated in the War of the Five Provinces, preventing the country from fracturing under the leadership of General Manuel Azcuénaga. Dramatic cultural changes in the 1700s and 1800s, including the arrival of millions of English-speaking immigrants, transformed it military into the Carlosian Armed Forces, its present name. With the outbreak of the First Great War in 1903, it was forced to radicalise its structure entirely, including the adoption of an entirely new framework and the modern divisional system which it still uses today. However, it was not until the years before the Second Great War that a permanent, large standing force was fully established.

The Armed Forces' manpower is derived from paid volunteers, although conscription has been used in the past or in times of crisis. Conscription during peacetime was abolished in 2008, though it can be reinstated by a simple majority in parliament or by the President under the Extraordinary Powers Act of 2010. According to a study published by the International Centre for Peace in 2015, Carloso is the second largest exporter of weapons in the world after Stasnov. In the same study, Carloso ranked unusually low on the list of countries by arms imports, mostly due to its large domestic armaments industry. The Armed Forces possess and operate a wide variety of modern, powerful weapons across all branches. It currently has a classified number of personnel deployed across the world, though many are concentrated in Carsodonia and Sde Dov. Carloso is a nuclear armed state with an inventory of both strategic and tactical weapons. In 2015, it was estimated to possess 4,378 warheads, of which, 2,941 are active. These can be delivered via a nuclear triad which includes sea, land and air-based platforms. Carloso detonated its first nuclear weapon, Trinidad, on 17 July 1948 and is so far the only country to ever use them in warfare with the bombing of XXX at the end of the Second Great War.

The Carlosian Army (Spanish: Ejército Carlosas) is the oldest branch of the Armed Forces, formed directly from the dissolved Iberian Colonial Army in 1581. It is by far the largest branch with ???,??? active personnel. Combatant forces are organised primarily into 19 divisions of roughly 20,000 servicemen each, including ten infantry, two armoured, two cavalry, three paratrooper and two mountain division units. In addition, there are several other separate regiments and brigades not subordinate to the divisions, including the two special operations regiments. 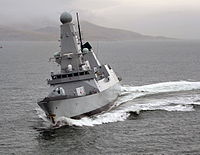 The Carlosian Navy (Spanish: Armada Carlosas) is the second oldest branch of the Carlosian Armed Forces, originally founded in 1581 after the transfer of Hispanic naval assets to the control of Gran Carlosia. In terms of manpower, it is the third largest branch with ???,??? active personnel. It is also the largest navy in the world in terms of tonnage; the Stasnovan Revolutionary Navy has more commissioned ships, weighing in at XXX tonnes at the end of 2015. The Chief of the Navy Staff, currently Fleet Admiral Robert Callahan, acts as the professional head of the Navy and is its representative on HIGHCOM. The person elected to the post is usually of five-star rank, and is appointed on the recommendation of the President. It has no operational command over Naval assets, though it can serve in a supervisory role and is based at the Department of Defence in Madrigal. All fleets, and indirectly all Naval forces, are instead under the command of the Fleet Commander, which is also held by a five-star officer appointed by the President.

Personnel in each service

Retrieved from "https://iiwiki.us/mediawiki/index.php?title=Carlosian_Armed_Forces&oldid=155605"
Categories:
Hidden category:
This page was last edited on 19 January 2020, at 03:48.
Privacy policy
About IIWiki
Disclaimers