Carvagna or officially the Grand Duchy of Carvagna (Vespasian: Granducato di Carvagna) is a Autonomous Federal Region of Etruria, subordinate to the constituent state of Vespasia. Carvanga has an area of XXXX square kilometres (8,900 square miles) and a population of about 3.5 million inhabitants. The capital and largest city is Stazzona.

Carvagna is known for its landscapes, traditions, history, artistic legacy and its influence on high culture. It is regarded as the birthplace of the Etrurian Renaissance and has been home to many figures influential in the history of art and science, and contains well-known museums such as the Santuario and the Cavalli Palace. Carvagna produces wines, olives and popular dishes, leading it to be considered the nation's food capital. Having a strong linguistic and cultural identity, it is sometimes considered "a nation within a nation".

Carvagna is traditionally a popular destination in Etruria, and the main tourist destinations by number of tourist arrivals are Stazzona, Forello, Rotondella, Salandra and Tricarico. The village of Salandra is also the most visited seaside destination in the region, with seaside tourism accounting for approximately 40% of tourist arrivals in Carvagna. Additionally, the wine region and especially the Campi di Benedizioni are also internationally renowned and particularly popular spots among travellers.

Carvagna has over 120 protected nature reserves, making the region and its capital Stazzona popular tourist destinations that attract millions of tourists every year.

Roughly triangular in shape, Carvagna borders the Vespasian regions of Tavullia to the northwest, Floria to the north and east, Piavia to the east and Centrale to the southeast.

The hilly terrain of the Campi di Benedizioni

The climate is fairly mild in the coastal areas, and is harsher and rainy in the interior, with considerable fluctuations in temperature between winter and summer, giving the region a soil-building active freeze-thaw cycle, in part accounting for the region's once having served as a key breadbasket of ancient Poveglia.

The 1921 constitution devolved most legislative and executive competences from the constituent state level to the autonomous level for Carvagna. Administratively, the province enjoys a large degree of autonomy in the following sectors: health, education, welfare and transport infrastructure, though some areas do see subordination to the Vespasian state government, in which should legislation compete, the Vespasian state government will overrule it, as will the federal government.

Annalisa Taddei is the incumbent Prefect of the Region since 2016.

Carvagna, like Torazza and San Eugenio maintain the pre-unification governing systems. Carvagna is officially a constitutional monarchy, with Grand Duke Alessandro III declared as head of state. The 1921 Constitution recognises the Grand Duke as head of the Carvantine Sub-State, however he has solely ceremonial powers. The Grand Duke is tasked with opening and dissolving the Carvantine Senate, appointing and accepting the resignation of the First Minister and representing the state at national events. 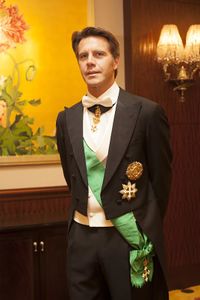 Alessandro III is the current Grand Duke of Carvagna, succeed his father, Giovanni VIII in 2009.

Efforts by Carvantine politicians to have the region recognised and elevated to constituent state status have consistently failed.

The Senate of Carvagna has 40 seats and in the 2016 election, it saw the Citizens' Alliance win 24 seats, Tribune Movement 10 seats, Together for Carvagna 4 seats, Etrurian Federalist Party 1 seat and Popular Renewal 1 seat.

Since 2016, Carvagna has been led by Matteo Taddei of the Federalist Party.

Carvagna has been a consistent bastion of liberal-centrist political parties. Since 1921 it has been dominated by primarily the centre-right. From 1921 until 1936 it was dominated by the Catholic Traditionalist Party, following the collapse of the Etrurian Social State in 1946, it was dominated by the Popular Action League until 1975, when it was succeeded by the Etrurian Federalist Party. However, since the EFP's domination has waned as the Grand Duchy has moved toward the Citizens' Alliance.

Carvagna is regularly declared the "stronghold and beating heart of progressive politics" in Etruria. Its voters have consistently backed improved rights for minorities including the LGBT community, it has been highly opposed to the strong and often heavy handed anti-mafia methods of the federal government, opting for legal constrictions and rehabilitation of mafia foot-soldiers. Carvagna is also the most pro-Euclean Community region in Etruria, during the 2016 Referendum, it voted 87% in favour of EC membership.

Stazzona is the economic, cultural and political hub of Carvagna.

Carvagna's economy is dominated by agriculture, mining, services and tourism. Carvagna's per capita is the highest in Etruria, beating the national average by 22%. The Grand Duchy also has the highest standards of living within Etruria, the lowest unemployment rate, highest literacy rate and one of the highest concentrations of university graduates. Carvagna competes with Torrazza to be the technological hub of Etruria, with several major IT and engineering firms being based in Stazzona.

The subsoil in Carvagna is relatively rich in mineral resources, with iron ore, copper, mercury and lignite mines, the famous soffioni (fumarole) at Guardella, and the vast marble mines in Virgilia. Although its share is falling all the time, agriculture still contributes to the region's economy. In the region's inland areas cereals, potatoes, olives and grapes are grown. The swamplands, which were greatly altered during the Social State era, now produce vegetables, rice, tobacco, beets and sunflowers.

Vineyards of the Campi di Minerva

The industrial sector is dominated by mining, given the abundance of underground resources. Also of note are textiles, chemicals/pharmaceuticals, telecommunications, engineering, software and printing/publishing sectors. Smaller areas specialising in manufacturing and craft industries are found in the hinterland: the leather and footwear area is focused in Stazzona, the ceramics and textile industries in the Coiano area and automobiles and scooters in Linari. The heavy industries (mining, steel and mechanical engineering) are concentrated along the southern strip around Virgilia, where there are also important chemical industries.