The Euclean Community (EC; Gaullican: Communauté Eucléenne, CE) is a politico-economic union of 12 member states that are located primarily in Euclea. It has an estimated population of over 356 million. The EC has developed an internal single market through a standardised system of laws that apply in all member states. Euclean policies aim to ensure the free movement of people, goods, services, and capital within the internal market, enact legislation in justice and home affairs, and maintain common policies on trade, agriculture, fisheries, and regional development. Within the Zilverzee Area, passport controls have been abolished. A monetary union was established in 1996 and came into full force in 2000, and is composed of 12 EC member states which use the Euclo currency.

The Euclean Council is made up of a dedicated delegation sent by the government of each member. Delegates are typically a high-ranking member of the state’s diplomatic corps, however at times a delegate has been a prominent politician with experience in diplomacy. The Council’s primary duty is to lobby the concerns of the member states in propositions of legislation supported by the Commission. Before legislation is introduced to Parliament, it is often debated by the Council. The body often drafts policy, but it does not have the power to introduce it as legislation. However, the Council can pass a resolution endorsing a particular policy, and the Parliament is required to consider the Council’s resolutions for debate. The Council is indirectly elected and convenes on a daily basis to discuss suggestions and concerns to the bills put forward by the Commission, draft policy itself, and offer commentary on legislation that is ultimately accepted by the Parliament. The Council is chaired by the President of the Euclean Community.

Several member states maintain strategic alliances within the EC. Examples of such alliances include the Northern Forum, the Morwall-Westbrücken Understanding, and the Group of Six. 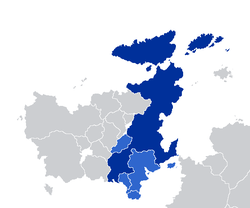 The Euclean Central Bank, often abbreviated as the ECB, is the central bank for the euclo and the Euclean Community. It was established in 1995 as a precursor organisation during the development of the Euclozone currency area. As the Euclozone consists of 12 member states, many of whom are global economic powers in their own right, the ECB is one of the most important central banks in the world. As a result, the ECB occupies a central place in the administration of the Euclean Community, and works frequently with the central banks of member nations to develop a coherent and consistent financial policy across the entirety of the Euclozone. The initial capital stock of the ECB was invested by the central banks of all Euclozone member states, which retain primary and immediate control over the ECB. Headquartered in Rayenne, the current President of the ECB is Ioana Streulea, former governor of the Bank of Amathia and former director of Silverwood Hills international division. Prior to the construction of the Euclotower, the current seat of the ECB, the bank was situated in a former warehouse complex known as the Euclotheum.