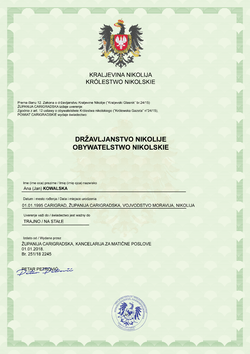 A minor acquires Nikolian citizenship if:

A person can be naturalised, or recognised as Nikolian citizen under following conditions:

Upon receiving positive results, the applicant is invited to a ceremony in the Voivodeship palace depending of the place of application. The ceremony involves reading an Oath of Allegiance in front of the Nikolian flag, with the left arm on the Bible and the Nikolian Constitution, and the right arm raised. After the oath, a person affixes his signature in the citizenship register, and is handed with the original citizenship certificate and a copy of the Nikolian Constitution. As Voivode hands the citizenship certificate, he greets the new citizen with a phrase: "Welcome among Nikolians".

I, [name] solemnly pledge allegiance to His Royal Highness King Aleksandar the Second and the Kingdom of Nikolia, i swear that i will respect and defend the Constitution of Nikolia, Nikolian values, culture, history and tradition. I solemnly renounce allegiance to other country, its military and ruler, and reaffirm allegiance to Nikolia, and confirm that i will, should i be called, help Nikolia and its people in case of war or other catastrophes, so help me God.

The Oath is taken with the right hand pulled up with the middle and index fingers extended and touching each other, while the ring and little fingers are bent and touched by the thumb, while the left hand rests on the Constitution of Nikolia and the holy book. The persons can decide whether they want to take an oath with the holy book and whether they want to end the oath with "...so help me God", however, prior notice is required.

Nikolian citizenship can be lost in following situations:

Dual citizenship is allowed under the following circumstances: