The Lorecian Community (LC) is an economic and political union of seven member countries in Lorecia, Astyria. It was established after a round of agreements among the six founding members. The final agreement, the Bruningen Accord, was signed on 5 July 1994 and officially established the Lorecian Community. In the Bruningen Accord, the member countries agreed to establish a union with free movement of people, goods, services and capital in an internal single market. The Lorecian Community also employs a system of standardised laws between the member nations, which allows for a unified legislation in justice and home affairs, agriculture, regional development and fisheries. Passport and customs checks between the member countries have been abolished with a project of a Lorecian citizenship.

After the signing of the Bruningen Accord in 1993, Noordenstaat, Scanonia, Nidwalden, Fyngaria and Aurora Confederacy became founding members of the Lorecian Community, agreeing in common policies and cooperation. Since then, the Community saw its first expansion in 1997 with the integration of Ostrothia, Valkea and Nynorsk Ostlijord to the bloc and later in 2004 with Mizialand. As a response to growing lorscepticism, member nations reunited in Nidwalden during 2009 and signed the Treaty of Vaduz which contemplated the procedure to withdraw from Community institutions. While the Treaty came into force in January 2010, no nation has made use of it, although _ held a referendum in [ year ] to decide whether the Kingdom would remain in the economic bloc.

With a total population of 296,517,989, the Lorecian Community is one of the most powerful economic blocs of Astyria, its closest economic partners include former colonies such as Hindia Belanda and Lorecian non-member nations such as Caledonia. All LC nations are catalogued as having very high Human Development Index and most of them are internationally recognised for having low corruption rates and full democracies; since its creation, members of the LC have worked as mediators in several conflicts across the region and currently leads anti-piracy operations in Astyria. The Lorecian Community has participation in the Astyrian Peace Organization and the E10 Council of Nations besides of counting with several cultural offices in non-members nations. The current Secretary General of the Lorecian Community is the former Scanonian Prime Minister Anders Mårtensson.

The Lorecian Community is preceded by a long standing history of economic and political cooperation between Lorecian states, primarily between former members of the Nassau Union. For several historians and international relations specialists, the idea of a Lorecian supra-national rule can be traced back to the formation of the modern states and the Lorecian states system; according to Kristen Linderborg, Scanonian diplomat and historian member of the Ducal Institute for International Reconciliation of Nidwalden, it was the formation of the first monarchic rules that achieved the unity of duchies and city-states what seemed to create a base that has continuously pushed throughout the Lorecian history and eventually concluded with the formation of the Lorecian Community.

As governments, however, were gradually more interested in domestic affairs and international cooperation was treated with secrecy or rather disinterest from the public opinion, the idea of a united government which could rule over most nations of the continent was gradually dissolved. After the Great Astyrian War, two important periods are often seen as key in understanding the path that led to the creation of the LC; a first period of distancing between Lorecian nations led by the dissolution of the Nassau Union and a second period characterised by a post-war economic enlargement due to the reconstruction of the former industrian and agricultural capacity of Lorecia. Advocating the integration of Lorecian economies, in 1927, the Prime Minister of Nidwalden Hildegard Mann stated during his inauguration speech "...it should be our light from now on, not only to realise how far we can go as Lorecians but also to give again the freedom and liberty to people..." referring to what war had taken from Lorecian societies and how stronger cooperation was needed to prevent future conflicts.

Since then, cooperation and the integration between Lorecian countries has been a constant. Following the Fyngarian Revolution in [] and the progressive conversion of the country to a market economy, the continent saw the rising of liberal governments during the 80s and 90s that actively sought the modernisation of financial policies with an important neo-liberal nature while combined with social policies which were regarded also as liberals at some degree and variations between countries (Nidwalden waited until 1990 and Albeinland until 1986). 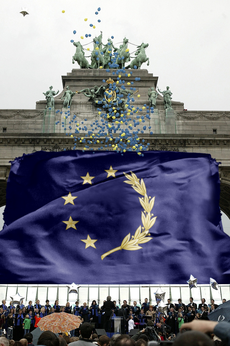 Although the signing of the Bruningen Accord in 1994 marks the start of the formal cooperation between Lorecian nations under the name of the Lorecian Community, previous meetings between Heads of State and Government during the 90's preceded the Accord; probably the most important, however, was the Treaty of Kijmáfórs of 1991 signed by Fyngaria, Nidwalden, Noordenstaat and Scanonia, which set the Lorecian Economic Area as the base for further economic integration in Lorecia. The aims of the LEA were to construct a common internal market, that would allow free movement of goods and persons and a customs union between members. The Economic Area functioned with the four central Lorecian nations being members until the memberships of Aurora Confederacy was accepted in 1993; a year later, in 1994, the new member of the LEA and the previous four reunited in the Noordenstater city of Bruningen to sign the Bruningen Accord which formally established the Lorecian Community as a political and economic union.

The accord renamed the Lorecian Economic Area as the Lorecian Community and consolidated a common Lorecian policy, merging past treaties signed by member nations and combining them in regional level sphere which eventually finished the process of unification of customs, the creation of a Lorecian citizenship and the internal single market. A year later after the Bruningen Accord was signed, the then six members held the first Lorecian elections to choose the first members of the Lorecian Parliament and the first Secretary General of the Lorecian Community; since then, Bruningen has remained as the political centre of the community as well as an important cultural and financial centre, the city is known as the de facto capital city of the bloc and has a certain status which differentiates it from other cities in Noordenstaat and the Lorecian Community.

Since its formal establishment as the Lorecian Community with the Bruningen Accord, the bloc has converted itself into an economic and cultural power not only in Lorecia but also in Astyria, ranking first in the region in GDP figures (nominal and PPP, total and per capita). Throughout its history, the LC saw its first enlargement with the integration of Nynorsk Ostlijord, Valkea and Ostrothia as full members in 1997, then later in time, with the accession of Mizialand as the seventh member that came into force in [ day month ] 2004, since then, other Lorecian nations have been proposed as candidates members for the LC but as of 2020, Caledonia is the only recognised candidate for membership of the bloc.

Since its creation, member countries of the Lorecian Community have suffered from Lorscepticism, with strong criticism on the internal politics, the complexity and bureaucracy with which it functions and the lack of positive economic effects it has had on multiple areas that regarded as undeveloped or developing under Lorecian standards. It is, however, one of the key aspects to learn politics in countries members of the community during the 2010's, the assumption of lorcepticism and their crescent voters as a way of channelling discomfort with the political establishments of both the states and the bloc. As a result to this, in 2009, the seven leaders of the community reunited in the Nidwaldester city of Vaduz to set the guidelines that allowed the Treaty of Vaduz for the Resignation of Membership. A treaty which came into force during the same year and allowed the withdrawal of any of the members following a protocol that would create the better socio-economic and political conditions for this to happen; although as of 2020, no member has withdrawn its membership, [ uhm country ] held a referendum during [ year ] to decide its future inside or outside the Lorecian economic bloc.

As 2019 commenced, the Lorecian Community led the foreign scenario of the Lorecian continent while rising the tensions with the Belkan Federation, after the country invaded the neighbouring Artostka under a campaign that openly crashed with anti-discrimination and peace policies of the community. Since then, the bloc has kept its diplomatic ties with the rest of Astyria and its political influence on its members to join a united front that would fight to prevent a further ethnic cleansing and democratic impasse in Belka, Artostka and Plateinsen-Alder. The members of the LC joined forces in November 2019 with the Blackhelm Confederacy, Nikolia, Aswick and Caledonia, which has increased its perspective as an officially recognised candidate for membership. 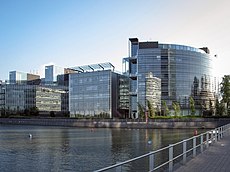 Office buildings in Våren Livet, capital of Valkea; the northern country holds one of the most important industrial centres of the continent.

The economy of the Lorecian Community comprises the joint economies of Valkea, Aurora Confederacy, Nidwalden, Noordenstaat, Scanonia, Ostrothia and Mizialand. As of 2019, the bloc's nominal GDP stood at $125,699,296,284,419, while its nominal per capita GDP was $49,948. One of the unique aspects of the Lorecian economy is its internal market which allows 296,517,989 people to move freely, enlarging labour markets and opportunities; inside the bloc, however, Noordenstaat and Scanonia are often seen as the leading single economies, ranking seventh and eighth respectively in Astyria (and second and third in Lorecia) by their GDP figures.

The finances of the Lorecian Community and its economic policies are directed mainly by the Council of the Lorecian Community and the Lorecian Central Bank, which is located in Saint Moritz, Nidwalden. Despite the differences there might be when comparing different regions inside the bloc, in general the economies of the Lorecian Community can be catalogued as developed and based on free markets and, although the participation of the state in several countries is seen as a key aspect in the economy, these tend to rank highly in economic freedom. Although the majority of the inhabitants of member-states of the community live with high standards of life as the bloc has pursued advanced social agendas rooted in welfare states and social models since its creation, social inequalities between countries are still an issue that raises preoccupation among the members of the Lorclub; in 2019, a report exposed that while in Málvákiruáhiz (Fyngaria) the average income was Int$18,420, in Vorarlberg (Nidwalden) it was Int$77,620; the same report calculated the average income of the community at Int$49,948.

Retrieved from "https://iiwiki.us/mediawiki/index.php?title=Lorecian_Community&oldid=354337"
Categories:
Hidden category:
This page was last edited on 1 June 2021, at 16:31.
Privacy policy
About IIWiki
Disclaimers