Djoka is a 2019 Gaullican action film directed by acclaimed Mabifian-Gaullican director Djamchide Touré. The film, a modern adaptation of the famous Aïibe ka Djâmanou novel of the same name by Ibrahim Barkindo, is set in modern day Mabifia. It tells the story of an orphaned Bahoungana child (Ali Ndele), who takes up arms against a proposed mining development in his village. The film deals with the themes of identity and courage in the face of adversity, and was praised for its treatment of issues such as Post-Traumatic Stress Disorder on child soldiers and the legacy of colonialism on Bahia.

The film debuted at the Festival of Bahian and Diasporic Cinema at Verlois, where it received strong reviews from the critics for its handling of Bahian issues. The film was highly successful critically, winning the top prize here and going on to win at the Montecara Film Festival. It also succeeded financially, leading at the box offices in most countries for several weeks after its launch. The film received some criticism in from conservatives in Euclea for its percieved "anti-Euclean sentiments", which was amplified by the presence of Djeli pop artist Djeïne on the soundtrack.

The film opens with a historical flashback, which shows the historical war leader Djoka fighting during the Sougoulie. This is accompanied by a narrator who is telling the story of the uprising. The film cuts to the present day, revealing that the voice was that of a history teacher. We are introduced to the main character, an unnamed orphan boy, as he sits in class listening to this story.

The class ends, and he walks out into the streets of Zandou. The film follows him as he threads his way through the market and other typical Bahian sights, before ending up at an abandoned Fetishist shrine where he is sleeping rough. He starts talking to the spirits of the shrine, through which the audience gains an insight into his character and situation.

The next day, at school again, he overhears his teachers talking about a proposed mining development by a Euclean mining company. Reading the newspaper after they leave it on the ground, he sees that the development will desroy the shrine which he has been using as a makeshift camp. He returns back there, only to see two white surveyors who chase him away from the site at gunpoint. The boy runs, eventually cowering in an alley where he cries himself to sleep.

In his sleep he has a vision, in which the spirits of the shrine urge him to defend them. He meets Djoka, who speaks in unclear and poetic phrases. When the boy asks how he can resist, the spirits tell him that he has the means already in his soul and his hands. He wakes up and sees a pile of money lying near him, enough to buy a weapon.

The boy goes to the market, and in a secretive tent he speaks to someone who is identified as an arms trader. He gives the money and gets an assault rifle with a small quantity of bullets. The salesman asks him his name, to which he replies that he is called Djoka. He then goes into the forests, and in a sequence which mixes flashbacks into the current procession of time prepares for war by applying white warpaint in the style of the historical Djoka.

He sets off for the shrine, and having arrived there he reveals himself to the two whites before shooting them. The gunshots alert others, who come armed and he flees into the bush. Sleeping in the undergrowth, Djoka and the spirits appear again and congratulate him. He is forced to keep moving, escaping the Euclean mercenaries who were hired to protect the mining site. While he flees, the film cuts to scenes of a protest in Zandou against the mining development.

Hiding in the bushes, the boy starts to sing traditional songs in triumph. He sets off towards the main camp of the miners, aiming to put a stop to their plans. He arrives and opens fire, killing several, and as he attacks the spirits of Djoka and other Zandou warriors seemingly attack with him. Despite this, the miners are too numerous and he is eventually cut down. As his eyes slowly close the spiritual warriors bow their heads in respect and when he dies they bring his soul onto a funerary pyre in the sky. The Eucleans throw his body into the river, but it is fished out and given a proper funeral by his teacher and the other classmates. 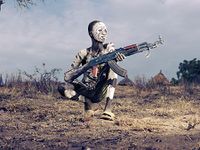 Ali Ndele in the role of the orphan boy.

Djoka is regarded as one of the most successful films of 2019. It won the top prize at the Festival of Bahian and Diasporic Cinema, a Béco aùreo at the Montecara Film Festival, and several other awards for its soundtrack and acting. The film was also a major commercial success, grossing 400 million dollars and topping charts in most countries. The film is seen as one of the best representations of post-colonial Bahia in the modern day, with filming actually taking place in Mabifia in the same areas and with input from local historians and tribal authorities.

The film's release was not without controvery, however. Several conservative public figures saw the film as being overly critical of modern Eucleo-Bahian relations, with some even going as far as to say that it "glorified violence against white people" and fears that it could trigger another wave of violence as seen during the Djikourou. In Mabifia, the film was criticized and even boycotted in some areas due to its sympathetic portrayal of Fetishism.

Retrieved from "https://iiwiki.us/mediawiki/index.php?title=Djoka_(film)&oldid=152418"
Hidden category:
This page was last edited on 12 January 2020, at 14:54.
Privacy policy
About IIWiki
Disclaimers