Germán del Caserío y Fernández-León is an Auratian professor, economist and politician who has been serving as Premier of Auratia since June 2013 and leader of the Sotirian Federation since January 2013. He served previously as the country's Finance minister from May 2011 to June 2013 and Secretary of State for Pensions June 2007 to May 2011. He is a member of the Assembly of the People representing a constituency in the city of Palma, La Virtud. Ideologically, he identifies as a paternalistic conservative and Christian democrat.

Del Caserío was born on 4 August 1960 in Salida, a small village in the state of La Virtud. He graduated from the University of Villadad in 1982 and went on to pursue his Doctor of Philosophy in economics at the University of Montecara. In Montecara, del Caserío met María Gómez, another Auratian expatriat studying at the University. The couple married in 1986 and returned to Auratia. Del Caserío worked as an associate professor at the University of Puerto del Rey, rising to the rank of provost in 1995. Del Caserío's career in education was stymied when he was diagnosed with Hodgkin lymphoma, a form of cancer in 1998. Although he recovered, del Caserío resigned from his post and went on to run for a position in the city council of Palma. Del Caserío succeeded and was elevated to the position of deputy mayor in 2001. He served in that capacity until he was elected to the Assembly of the People, the lower house of the Auratian Senate, in 2005.

Del Caserío would remain an unkown but loyal backbencher under the premiership of Antonio José Menéndez. After Menéndez was forced to resign following a series of sex scandals, del Caserío was made Secretary of State for Pensions under Premier Walter García. Despite being a relative unknown to the public, del Caserío reportedly had a very good working relationship with PM García, who elevated him to the office of Finance minister in 2011. When García announced in 2012 that he would not be seeking reelection in the 2013 Auratian Assembly election, he nominated del Caserío to take his place as leader of the Sotirian Federation. Del Caserío won an internal party election and was made party leader on 1 January 2013. Del Caserío would go on to win the 2013 election, becoming premier on 17 June 2013. Del Caserío was reappointed to his position following his victory in the 2017 Auratian Assembly elections.

As premier, del Caserío has continued his predecessor's iniatives to distance the Sotirian Federation from lobbying by the Solarian Catholic Church and has pushed the party to adopt a more secular agenda. He has been described as an economic moderate and social conservative, supporting pro-life iniatives and legislation. Del Caserío has been criticized for being among the most anti-LGBT politicians in Euclea. Although he supports the Euclean Community, del Caserío's administration has pushed for greater economic involvement with countries outside of the Euclozone, particularly with Auratia's former colonies in the Asterias. 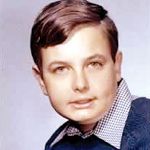 Germán del Caserío was born in Salida, a small farming village in the state of La Virtud, Auratia, on 4 August 1960. Curiously, del Caserío shares his birthday with Héctor Alvear, the country's premier during the Great War, who was born 76 years before del Caserío. His father, Eugenio del Caserío, was a wheat farmer and native Salidan. Anna Fernández-León, del Caserío's mother, is a former school nurse. Del Caserío is distantly related to Manuel Torres, a resistance leader during the Rose Rebellion. Del Caserío was the first of three children: María, his sister, was born when del Caserío was three, and his brother Raul was born when he five. In October 1967, Anna Fernández-León was invovled in an traffic collision. Though she survived, Fernández-León suffered major damages to her ovaries and was unable to bear any more children.

Del Caserío was reportedly a very shy and sickly child. Having nearly died of typhus at eight years of age, he was typically in and out of school. Nevertheless, teachers who had del Caserío traditionally describe him as having been a bright, yet bashful and reluctant student. As his family was among the wealthier families in the village, del Caserío was reportedly often mocked for his somewhat dapper and uppity appearance. He enjoyed reading comics, and Miguel Carvalho's The Crystal Palace was his favorite childhood novel.

At age 14, del Caserío was awarded a scholarship to attend high school at a boarding school in Puerto del Rey, where he would play association football. Friends of his said that del Caserío rarely spoke in class and was very homesick. He reportedly attempted to apply to the University of Puerto del Rey, Auratia's most prestigeous tertiary institution, but was denied. 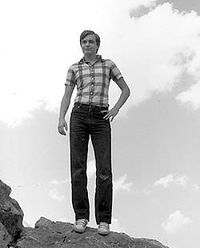 The first in his family, del Caserío pursued his undergraduate studies at the University of Villadad in San Esteban, Auratia There he joined the Young Sotirians, the youth wing of the Sotirian Federation. Although a regular attendee at Young Sotirian meetings, del Caserío was reportedly a mostly inactive member and unenthused about politics. During his time at the University, del Caserío befriended Javier Sánchez, who would later become the governor of San Esteban. He graduated in 1982.

A cancer survivor himself, del Caserío speaks at the Auratian Oncology Summit in Puerto del Rey in 2017.

After his studies in Montecara, del Caserío returned to Auratia and became an associate professor at the University of Puerto del Rey, specializing in teaching applied microeconomics, in 1987. Del Caserío was a respected and well-liked professor; he had a reputation of extending his office hours for students, and was reportedly lenient with submitted late work. During his professorship, del Caserío helped contribue to the writing of Auratian economics textbooks. During this time, he also learned Gaullican and helped forster an exchange with a university in Verlois, the capital of Gaullica.

Del Caserío received tenure and rose through the ranks of the University of Puerto del Rey School of Economics. He became the school's provost on 1 December 1995. He would remain in that position until 9 March 1999 to stand in election for city council of Palma.

In February 1998, del Caserío was diagnosed with Stage II Hodgkin lymphoma. He received chemotherapy and radiation therapy at Grace Hospital in Puerto del Rey until November 1998. Although he survived, del Caserío reported that he had suffered depression during his treatment and felt increasingly estranged from his wife. Like his mother, del Caserío became infertile after his treatment.

Election to the Assembly of the People 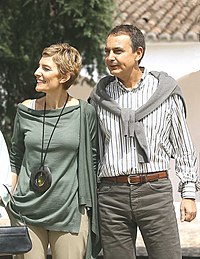 Del Caserío and his wife, María Gómez, on holiday in 2015.

Del Caserío has been married to María Gómez, an oncologist, since 1986. They have four children: their sons José, Miguel, and Alejandro (aged 30, 29, and 27 respectively), as well as their daughter Anna, aged 27. José del Caserío is a professional photographer based in Puerto del Rey.

Del Caserío has been described as one of the most private and least ecclectic premiers of Auratia since the Great War. Drawing on his experiences as a scout in his youth, del Caserío enjoys walking, hiking, and camping. He repotedly enjoys building dioramas of important battles, and he is a member of the Auratian Historical Society. Finally, Del Caserío is an avid pipe smoker, and he has opened up about his struggles with nicotine addiction.

Like most Auratians, del Caserío is a member of the Solarian Catholic Church. He attends weekly mass at St. Stephen's Church in Cienflores. He is very devout in his faith. Del Caserío has said of his faith that it is "everything he is" and his "beacon of light in the most trying of times."

Retrieved from "https://iiwiki.us/mediawiki/index.php?title=Germán_del_Caserío&oldid=217923"
Categories:
Hidden categories:
This page was last edited on 12 June 2020, at 01:23.
Privacy policy
About IIWiki
Disclaimers