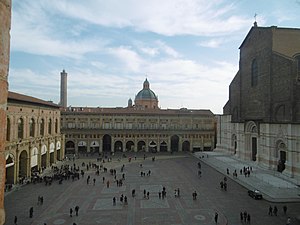 The University was one of the first in Euclea. Medieval universities grew out of informal gatherings of scholars, often itinerant, who sustained themselves by writing books and charging tuition to students who came and went as they pleased. Some of the better-reputed scholars were retained by merchants or aristocrats who became their patrons and whose children they often raised. The idea of a permanent home for teachers and students that was not reliant on the whims of the aristocracy became popular in republican Montecara at the end of the thirteenth century, and was encouraged by the need to train a class of professionals whose skills were in demand by a mercantile society. Experts in the law were essential to settling the growing number of commercial cases, seafarers needed skilled physicians, and wealthy merchants had money to spend on art and literature. The Senate responded by chartering the University in 1291 and providing a modest endowment for its faculty.

Most of the University's buildings are in the historic center of Montecara. There is little distinction between "campus" and the rest of the city, though the area around the University is strongly influenced by students and academic life. Student housing is similarly scattered among University and other buildings. 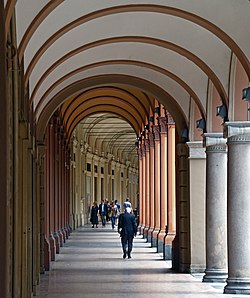 Arcade under the Law faculty building

The highest official of the University is the Rector, currently Prof. Dr. Umberto Uçì. The Rector is ultimately responsible for the proper administration of the University and for seeing to its academic and financial well-being. It is an elected position with a term of six years; an electoral college consisting of professors, lecturers and researchers, graduate students, and undergraduate students in certain proportions elects the Rector. The Rector also chairs the Major Council, the body that handles day-to-day governance of the University, and is ex-officio a member of the Council of Auditors, which handles financial matters.

Colleges of the University of Montecara

The University is organized into 21 colleges, which are themselves divided into 38 faculties.

Matriculating students apply to one or more specific colleges within the University and take only courses within their given college when enrolled. Students may, at the discretion of the instructor, audit courses from outside their college, but no credit is given. 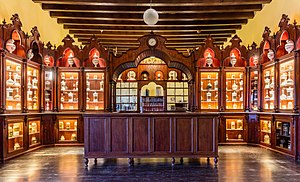 The university hospital pharmacy, built in 1445

The University of Montecara Hospital (Ospedàl da Univèrsita de Montecara) is a teaching hospital owned by the University and jointly operated with Sànita Montecara, the state health service. It conducts research in addition to its day-to-day operations treating the sick and injured.

The main library for the University is the Bibliotèca Savonòra, founded by the donation of his personal library by Guaspàr Savonòra in 1415. Before this, students and masters had to provide their own materials, which was often prohibitively expensive in the era before the printing press. Savonòra's donation allowed for books to be shared among all members of the University, greatly increasing the availability of useful texts.

The University archives are maintained by a dedicated staff and include documents and other artifacts from over 700 years of the University's history. The operating theater of the University Museum of Science and Medicine 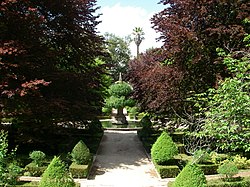 A fountain in the Euclean section of the garden

The University boasts one of the oldest botanic gardens in the world, established in 1517. It was originally intended as a reserve of medicinal plants for the use of physicians and apothecaries and their students, and retains a focus on plants with pharmacological qualities. It eventually grew into a living catalogue of plants from across the world, with the goal of having every plant biome represented in the collection. All plants on display are labeled with their taxonomic names, a reflection of the importance of the garden to classifying global plant life and studying it in a systematized manner. The garden remains a center of research into herbalism, phytopharmacogy, and phytochemistry. 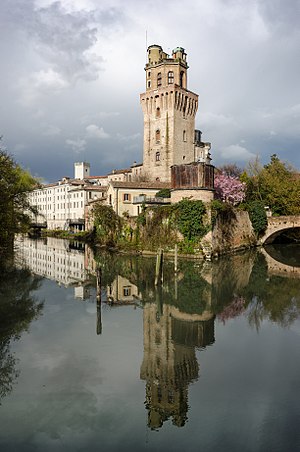 The University maintains an observatory, constructed in 1800, which was used to take the first accurate measurements of Montecara's longitude in 1805.

University of Montecara Press is owned and operated by the University on a for-profit basis. It publishes work by professors and masters, including research journals and quarterly reviews, as well as poetry, novels, nonfiction works, and works by outside writers.

Candidates apply to a specific program and are selected by a committee within each school. Generally, undergraduate students are chosen on a holistic basis that takes into account grades and evaluations from secondary school, the results of matriculation exams, and essays written by the candidate. One quarter of places in each first-year class is reserved for Montecaran citizens; the rest may be filled by either Montecaran or foreign students, but is usually dominated by those from abroad.

Admissions rates vary from school to school and year to year. In 2017, the highest admit rate for undergraduates was in the College of Economics at 63% and the lowest in the College of Veterinary Medicine at 12%. Of those offered admission as first-year students in 2017, 65% accepted.

Teaching and research are carried out by a faculty which consists of several ranks of academics:

The Làurea (La.) is the most basic tertiary degree and is a prerequisite for pursuing higher degrees. It is awarded after three years of study and the completion of a thesis which does not require original research.

Magistral degrees are intermediary tertiary degrees which are generally awarded after two years of further study. The Magistrà (Ma.) is awarded in all fields except for law, engineering, and medicine, and requires the completion of a thesis or comparable body of work which is worthy of publication. A Magistrà is required for pursuing a doctoral degree.

Degrees in law, engineering, and medicine are different from those awarded for other disciplines. The Magistrà di lexè (L.Ma.) degree is considered sufficient to begin preparing for professional certification as an advocate or notary. The actual examinations for these professions are administered separately. Those wishing to become judges, particularly at the appellate levels or in the specialized courts, must generally complete the Dotoràt di lexè (L.Dr.) degree. Similarly, the Magistrà di mediçìn (M.Ma.) implies fundamental competence at the practice of medicine and is often the terminal degree for nurses and medical assistants, while the Dotoràt di mediçìn (M.Dr.) is necessary for fully licensed physicians and researchers.

Members of the Carinthian nation at the University, 1497

Student nations have a history at the University dating back to the high middle ages. These are social organizations made up of students from the same general cultural or linguistic area that provide room and board, camaraderie, and other forms of support to students who might find themselves far from home. They are also the main organizations for clubs, intramural sports, theater troupes, and musical groups. The nations as they currently exist are as follows:

It is also possible, and common, for a student to be "nationless" and provide for their own room and board. This is particularly the case when there is no nation that matches well with a student's background.

Nations host certain events that are open to the entire student community and which are major events in the University social calendar. These include the formal ball held by the Nord nation every winter, which attracts thousands of participants.

The University’s extramural athletic clubs are collectively known as UM Atlètica. Teams for men and women are organized for all offered sports. Disciplines include:

The first official event for new students each year is called Eclèsia. Students, who are allowed to wear the black academic robe for the first time, meet to hear a speech by the rector and take the oath that all students of the University have been bound to for centuries. The oath, which is taken in Classical Solarian, is:

The works and speech which I make shall be wholly honest, and I shall give credit to those upon whom they rely.