Judapest (Judapesti in Lyonheimerish) is the capital and largest city in Lyonheimer. Situated in the north of the nation, it is the hub for most of the goings on in the nation, including the government, who are situated in the houses of parliament. The city was built by settlers from the Kingdom of Blechingia, and specifically a religious man named Alfred Heimer, now known as Saint Heimer, who built the Saint Heimer's Cathedral on his own, taking him fifteen years.

Judapest is the most populous and capital of Lyonheimer. It is also the headquarters of the military for Lyonheimer.

St.Heimer's Cathedral was built by Alfred Heimer, after he lead settlers to the location that Judapest now resides. Heimer was an extremely religious catholic man, who believed that by building a cathedral by himself, he would be able to go to heaven. Heimer spent around fifteen years constructing it, beginning the construction in the late ninth-century and ending in the very early 10th century. The cathedral was built to what, at the time, was the center of the city and acted as a center-piece for years. The cathedral can still be visited, and is one of the landmarks of the city

Saint Haimer's Cathedral is quite an important place for religious pilgrimage too, with people visiting often to pray. Some, however, only visit for the culture and history with guided tours offered 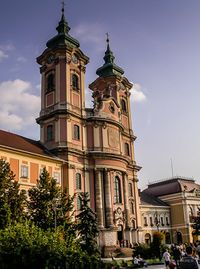 The parliament building is a must visit location if you are in Judapest, built in the 1920s, the building is open to the public when there is no meetings going on. Prime Minister Horvath Szbolazai is the head of the parliament

Retrieved from "https://iiwiki.us/mediawiki/index.php?title=Judapest&oldid=336768"
Category:
Hidden categories:
This page was last edited on 15 April 2021, at 14:51.
Privacy policy
About IIWiki
Disclaimers