The Königsreh U-Bahn is an electric rail rapid transit network in Königsreh, Mascylla's capital and second largest city. Serving as one of the four components of the city's public transport capabilities, along with the S-Bahn, buses and a tram network, it is owned, maintained and operated by the Königsreher Verkehrsbetriebe (KRVB, "Königsreh Transport Company"). It is additionally integrated into the Verkehrsverbund Zentralmaskillien (VZM, "Transport Association of Central Mascylla") to expand its network and allow access to the cities of Flussmund, Lehpold and Lensrau.

The first line, the U1, was finished and opened to the public on 21 May 1919; it is the second-oldest metro line and system currently in operation in Erdara, after the Ulich metro. Today it contains 179.4 kilometres (111.5 miles) of tracks and routes, serving 219 stations on 7 separate lines, making it the largest metro system in Mascylla and fourth largest worldwide. In 2019, around 1.56 million people used the U-Bahn each day, or about half of Königsreh's population, and more than 569 million throughout the year; it is the busiest means of transportation in the city and country respectively and the most expensive public transport system in Erdara.

The logo or roundel of the metro has seen various alterations throughout its history. All versions, excluding the first one utilized from 1919 to 1939 depict a capitalized "U" as the abbreviation of "U-Bahn" and "Untergrund", the Hesurian term for "underground" and "rapid transit" together. The first one to be counted as a logo of the metro is the trademark of the Hauptstadtregion Königsreh Untergrund-Bahn. The colours blue and white were also heavily used to differentiate from the colour schemes of the city's other public transport, most notably the S-Bahn which uses an orange-white palette, the buses green-white, and the trams purple-white, respectively.

Despite its simplistic design, it has risen to the status of a cultural icon of the city and has thus never been completely remodelled. The logo is most frequently used on stations and platform signs to signal the presence of an U-Bahn connection at the location, on the front of U-Bahn trains, or on maps of the system to notify the viewer; it is however mostly used in tandem with the logo of its umbrella company, the Königsreher Verkehrsbetriebe, usually depicted in the lower left or right section of the sign space. There is no formal code as to how the logo is to be used however. 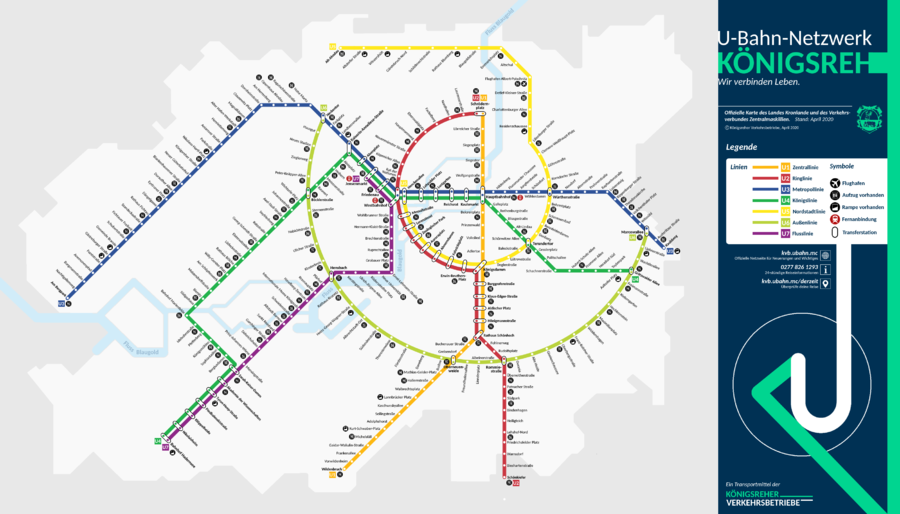 Network map of the Königsreh U-Bahn as of April 2020

Currently seven lines are maintained and part of the system:

The metropal card as of 2019, a smart card and subscription for universal use of the metro
Retrieved from "https://iiwiki.us/mediawiki/index.php?title=Königsreh_U-Bahn&oldid=208952"
Categories:
Hidden category:
This page was last edited on 20 May 2020, at 12:40.
Privacy policy
About IIWiki
Disclaimers