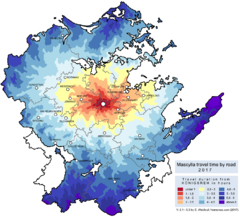 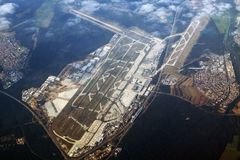 Königsreh–Albert Polschnitz Airport, one of the busiest airports in Berea

All activities and affairs of transportation is jointly overseen by the of the Ministry of Infrastructure and Ministry of Transport of the Realm of the Mascyllary government, though a large portion has been privatised and shared with various companies.

One of the world's first large-scale highway systems, the Autobahn is a nation-wide system of highways and roads. The country's most important waterways are the rivers Blaugold, Röhrn, Lehr, Lanne and Warne, as well as a canal system connecting the three rivers and Lake Sigismund respectively; the largest mairitime port is that of Mögdeburg at the mouth of the Mögd river. Königsreh–Albert Polschnitz Airport is the largest airport in Mascylla and a large international hub of air travel and transport in Temaria. Air travel in general is rarely used for inland flights, mainly due to its suffisticated road and rail network, but nevertheless competes with Mascylla's numerous privately owned railway operators. High- and medium-speed trains such as the ILE (InterLandExpress) connect urban areas, with passengers and cargo able to move at 370 km/h between cities. Most Mascyllary cities have a connection to rapid transit capabilities, most notably the Königsreh U-Bahn, and public transport as well as most of the infrastructure is provided by state.

The network of the railways is one of the most suffisticated and oldest of its kind in the world. The backbone is made up of five major lines or corridors radiating away from Königsreh, the Nordlandpfad, Südlandpfad, Zentralpfad, Sigismundpfad and Warnenpfad. These are served by and supported with numerous regional and local lines as well as dense networks in urban agglomerations. The HGB network, largely operated with the ILE train family and responsible for high speed train travel in the country, is operated separatly from its slower counterpart and specifically constructed to apply to internationalized standards to allow for international network cooperations such as the HGZ Telmeria, whom is a major factor of national railway travel. Generally the high-speed network is extensive and provides renowned service.

A HGZ Telmeria train arrives at Königsreh Hauptbahnhof, the busiest railway station in Mascylla by the number of daily passengers

The first railroad line with passenger carriage, the Hubertsburg-Merzenich-Landeisenbahn, assumed operation in 1846, and in 1855, the first line was opened connecting two major cities (Augusthal und Weidenau-Bahn). In its wake, hundreds of railroad companies were founded that slowly merged into six conglomerates by the begin of the 20th century, though they would be quickly nationalised and centralized by authorities in 1898. In 1950, these companies, having been temporarly unified as Reichsbahn (RB), were separated again and its rolling stock, passenger carrying and freight subsidies divided among its successors, while the maintenance and providing of the infrastructure remained government-controlled to avoid the rise of a network monopoly. Thus, the six original companies were retained and the network expanded by a third between 1951 and 1975.

In Mascylla, the railroad infrastructure, including all tracks, stations, maintenance workshops and signalling, is in the possession of the nationalised and non-profit orientated Nationalnetzwerk. Passenger travel is made available by private companies and firms, who comply with regulations posed by the Ministry of Transport of the Realm in order to accomplish running by franchising principle. Freight and cargo travel is divided among state-owned and private transportation companies, though they do not receive the same restrictions and laws to respect as its counterparts in public transport. Often companies rent or lend rolling stock items from public providers, as they often lack the financial abilities to maintain a fleet on their own.

The network in Mascylla encompasses 34,726 kilometres of tracks which use the standard gauge of 1,435 mm. 10,242 kilometres of which are electrified and 28,591 kilometres are double or multi-track. The maximum velocity of ILE trains on InterCity routes is 240 km/h (149 mph), while on certain segments of the HGZ Telmeria in Mascylla a velocity of up to 370 km/h (230 mph) is permitted. 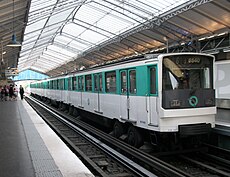 Train on the Königsreh U-Bahn arriving at the station Henriettenweg

Four Mascyllary cities have a rapid transit (in Hesurian "U-Bahn") network. The most famous of which is the Königsreh U-Bahn in Königsreh, the oldest and most full-fledged rapid transit network in Mascylla. The other systems are located in major cities such as in Flussmund with the Flussmund Metro, in Langquaid and in proximite areas with the Langquaid U-Bahn and in Konreid with the Konreid Untergrund.

All metropolitan areas and cities maintain a suburban transit system (in Hesurian "S-Bahn") that link city centres with, as its name suggests, suburban areas and often other surrounding towns. While formally separate means of transportation, Königsreh and Flussmund have a linkage system that integrates S-Bahn activities to the U-Bahn network via third rails; particularly Königsreh developed a shared agreement with the surrounding states of Eustria, Folnery and Shwesia to integrate its network to nearby cities such as Dorothea and Lensrau as the entity Verkehrsverbund Zentralmaskillien.

Often cities build up or extend existing tramways to light rail transportation that share the same tasks as S-Bahnen, but are called "Stadtbahnen" ("city train"; ST-Bahn).

The establishment of tram networks in Mascyllary cities began in the late 20th century and by 1920, every major city had a developed system. The rise of individual motor transport led to a sharp decrease in interest of preserving public transport capabilities and a large portion of the network saw retirement and deconstruction thereafter; Augusthal was the last city to maintain a tramway network in 1960. However, since the 1970s, a new trend of new tram construction and revival can be thoroughly observed and most of the original systems were reinstituted by the turn of the century. The introduction of tram-train lines came to prominence in completely new systems such as in Ihleburg, Pereuth or Südhaven. Some of the most extensive tramways include the Königsreh Metrolink in Königsreh, the Dockfurt Stadttram in Dockfurt, the Herzesland Tram in Lensrau/Reifurt, the Tramlink in Augusthal/Weidenau and the Südtransit in Lannbrück/Mackrau. 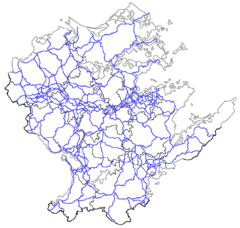 Mascylla maintained approximately 412,000 kilometres of roads, of which 98,000 kilometres are non-regional, inter-state or national roads. The Autobahn, officially known as Reichsautobahn or Reichsbahn, is a national highway system that links urban regions and provides inter-state motor travel at a larger dimension. The network had a total length of 8,707 kilometres in 2016, making it one of the densest systems of its kind in the world. While no actual speed limit is postulated, a certain advisory speed limit for a segment of the Autobahn is provided. The navigational sign of the Autobahn is a specific blue sign and is named using the capital letter A and a number (for example A4). Apart from the Autobahnen, the country is traversed with a dense network of four-lane roads, termed Herrsstraßen ("lord roads"), on which every vehicle is allowed and roads may intersect. They serve as mid-speed roads for more rural areas and connect local cities and towns. It is signed with a yellow sign and named with a capital H followed by its number (for example H16).

Other road types include the Landesstraße ("state road") maintained by the states of Mascylla, prefixed with "L", the Stadtstraße ("city road") in the country's Free Cities, prefixed with "St", and the Kreisstraße ("district road") charged by the Landkreise or local districts and municipalites, prefixed with "K". They lack uniformed signs and numbers are uniquely chosen and dependant on the state in question.

The responsibility of maintenance of the Autobahnen and other national roads is largely diversified, but loosely centralized in the Reichsstraßenamt, an agency of the Ministry of Infrastructure of the Realm, though Kreissstraßen specifically are under the administration of local authorities. Mascyllary Autobahnen are mostly free of toll requirements, though certain locations such as tunnels or bridges introduced a mandatory toll in the 2000s; city centres such as in Königsreh are designated environmental zones, averting the presence of trucks and buses via fee payment by its owner. The country uses right-hand traffic since 1756. 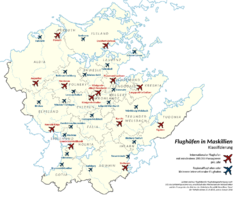 Map of international and regional airports of Mascylla

The Mascyllary network for air travel is mainly orientated for international or outbound flights, while flights from and to inner destinations have become far less attractive and uncompetitive as extensive overhauling of rail and motorway capabilities allowed for cheaper travel. Nonethless, planes still offer a suffisticated demand for freight and smaller domestic services, while they are a highly important part of international transportation for Mascylla and airlines have thus an extensive catalogue of destinations abroad and an internationally recognized status, due to Mascylla's large air market potential.

Mascylla's air market has historically been under the supervision of the Mascyllary government and saw only recently, beginning in the 1970s, a trend of modernization and privatisation, which led to the opening of a whole new market for newly founded companies and international operators. 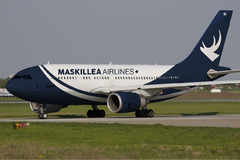 The biggest airline in Mascylla is its flag carrier and one of the largest private airline companies in the world, Maskillea Airlines. With numerous subsidies such as Maskillea Express and Maskillea InLand, who operate autonomous, the airline deals with a majority of international domestic air travel to and from Mascylla, operating a dense system of Erdaran and intercontinental routes. Its predecessor was Interflug, one of the largest airlines in the world between the 1970s and 2000s. Other charter and leisure airlines include Firmament, Himmelsexpress, Adler Airways and FliegWeg.

Numerous air cargo companies also comprise a decent amount of Mascyllary air travel, with operators such as Maskillea Cargo, MKH Transport (a subsidiary of Maskpost) and AeroBote (jointly owned by Maskpost and Skytrain) dominating the industry.

Water transport in Mascylla has faced significant issues with the country's topography and northern location, as coastal areas would freeze over and make it difficult to appraoch. However, the western coast and inland bodies of water such as Lake Sigismund remain ice-free all year mainly due to warm ocean current from the Kansic Sea. Nonethless, travel on water is an integral means of transport for freight in particular and has its origin in the beginning of the Industrial Revolution.

Map of artifical waterways and canals in Mascylla

At the begin of the Industrial Revolution a number of canals were constructed throughout the country that were largely used by small ships and narrowboats (Schmalboote), which were specifically retrofitted in their size and construction for use on the canals. At the end of the 18th century, the system was fully developed and most of the cargo and goods were transported via the canal network. The importance of waterways diminished greatly after the mass introduction of railroads in the 1840s however, and construction and maintenance stopped completely. Today, Mascylla features around 3100 kilometres of traversable inland waterways, most of which are used for recreational and tourist ativities. Another 580 kilometres of which are still used for commercial purposes.

Approximately 19% of all goods reach Mascylla via ships, being the second largest supplier of international goods after trucks and cars. The four biggest harbours of the country are:

Apart from these, Mascylla features numerous inland harbours, of which the most important are: Mackrau (on the eastern coast of Lake Sigismund), Trevermünde (on the western coast of Lake Delchse), Ihleburg, Brunswald and Merzenich. The ports in Mögdeburg and Brunswald also operate petroleum, gas and coal terminals for foreign imports.

Retrieved from "https://iiwiki.us/mediawiki/index.php?title=Transport_in_Mascylla&oldid=266219"
Category:
This page was last edited on 21 October 2020, at 15:56.
Privacy policy
About IIWiki
Disclaimers