The Luziycan name for the city, Gusev, derives from the "Prince of Gusev," who was selected as the first Count of Oteki during biblical times. The title of Gusev likely derives from an old Slavic word meaning "goose," and may have referred to a now-extinct species of geese. Up until the Txotai rebellion, Gusev was also the common English name for the city; however, after Namorese authorities suppressed the rebellion, the name Kusef (a hybrid between the Luziycan Gusev, Namorese Kusai and Geadish Kusoof) was introduced as part of a regionwide campaign to foster a pan-Namorese identity.

Kusef's history can be traced back to ancient times. According to historians, Kusef began as a cluster of villages - each with no more than thirty inhabitants - situated on both banks of the Saint Luther, widely accredited with converting the native Otekians to Christianity, resided in Kusef. His presence in Kusef established its religious significance. During his lifetime, he commissioned the construction of the Gusev Church, one of the earliest Christian house churches. A square was also built in front of the church for followers to congregate. The church remained until it was destroyed in a fire during the 3rd century CE, after which the St. Luther's Cathedral was built in its place.

In the centuries that followed Saint Luther's propagation of the Gospel to Oteki, Kusef became a hub for commerce and religion. The Golden Spice Road, a network of trade routes that extended from present-day Luziyca to Namor, ran through Kusef, connecting the city with the outside world. Trade caused a non-Otekian population to develop within the city, although that population remained small throughout the ages and quickly assimilated into Otekian society.

The non-Otekian population in Kusef saw an unprecedented rise after the Duchy of York sold Oteki to the Hào Dynasty, with both Kannei Namorese and Tuhaoese, most of whom soldiers and families of officials dispatched to administer the newly-acquired region, settling in the eastern quarters of the city, separate from Otekians. Thus, buildings of Monic architecture, ranging from yamens to temples, began to appear in Kusef, although a large portion of the city remained influenced by Otekians and Slavic culture. Kusef's eastern population was mostly undisturbed until the First Namo-Luziycan War, when forces under the command of the Patriarchate of Gusev seized control of the city from the Hào. Large-scale efforts to erase any trace of Hào rule ensued, and Patriarch Kuzma Iosif ordered the demolition of the "heretics' quarter" (referring to the eastern settlements) and the expulsion of its population. All ethnic Tuhaoese remaining in Kusef were killed, whereas some Kannei faced the same fate or were transferred to the eastern parts of Oteki. By the time the First Republic of Oteki was established, there were no Kannei or Tuhaoese permanently residing in Kusef.

Under the FRO, Kusef thrived, although the city suffered along with the rest of the region during the Great Depression.

File:Fallofkusef.jpg
A Namorese tank symbolically crashes the gates of the Presidential Palace in Kusef, which served as the residence of the President of the Second Republic of Oteki during the rebellion.

After the FRO was disbanded and Oteki/Txotai was reincorporated into Namor, the Namorese Liberationists struck an agreement with FRO leaders which granted the Otekian Self-Administration partial control over Kusef. The OSA and the newly-founded prefectural government of Txotai continued to jointly administer Kusef until NMR 2306, when repeated clashes between local authorities and separatists led to the Otekian rebellion; the Second Republic of Oteki occupied Kusef and designated it as Oteki's capital. Separatist rebel forces held on to Kusef for four years until it was recaptured by Namorese forces. The incident became known in Luziyca and elsewhere as the "Fall of Gusev" due to the relatively little resistance put up by separatists as the Namorese entered the city.

After the rebellion, Namorese authorities embarked upon a large-scale "restructuring" of Kusef. New settlements, which became known as the "new city" of Kusef, were built to the east of Kusef's "old city." 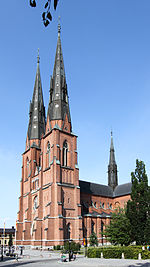 St. Luther's Cathedral in the Old City of Kusef is one of the oldest cathedrals in Esquarium
Retrieved from "https://iiwiki.us/mediawiki/index.php?title=Kusef&oldid=47872"
Categories:
Hidden category:
This page was last edited on 27 March 2019, at 03:52.
Privacy policy
About IIWiki
Disclaimers