Evidence of habitation of present-day Lemovicia dates back between 16,000 BCE and 12,500 BCE, with many Lemovicians claiming that they are the descendants of the proto-Euclean inhabitants who resided in Lemovicia. However, the exact origins of the Lemovicians are unclear, although it is known that they were referred in the Solarian Empire as the Menes.

Today, virtually all ethnic Lemovicians are adherents to the Episemialist Church, with Episemialism playing an influential role in shaping Lemovician culture and identity.

Inheritance was traditionally patrilineal, with the eldest son inheriting the baserri, and all younger sons inheriting any other properties owned by that branch of the clan. Over time, as clans grew in size, younger sons are forced to split off from their native clan and either join a new clan, or establish their own clan. 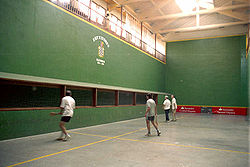 However, due to rule by foreign powers, such as Miersa and Narozalica, sports such as basketball, ice hockey, and football have gained popularity among the Lemovician community.

Retrieved from "https://iiwiki.us/mediawiki/index.php?title=Lemovician_people&oldid=211948"
Categories:
Hidden categories:
This page was last edited on 27 May 2020, at 20:11.
Privacy policy
About IIWiki
Disclaimers