The Miersan Federative Council Republic (Miersan: Mierska federacyjna republika radziecka), also known as East Miersa (Miersan: Mierska Wschodnia), is a sovereign state in central Euclea, comprising the eastern portion of the historical nation of Miersa. It is bordered by Kantemosha and Kirenia to the north, by Aimilia and Gaullica to the east, and Champania and the breakaway state of Lemovicia to the south. To the west, it is bordered by West Miersa, though like its western counterpart, East Miersa claims to be the legitimate government of the entire Miersan nation. The country has an area of 197,568 km2 (76,281 sq mi) and a population of 21.7 million. According to the constitution, East Żobrodź is the capital, but this has limited international recognition.

Miersa was first inhabited by the early Marolevs in the late classical period, as the Solarian Empire expanded into the Miersan hinterlands. Although not conquered by Solaria, the Solarians left a definite legacy in the region. The three first significant Miersan states were known as the Three Crowns, with East Miersa largely constituting Wybrzeże. It was united with Zachódnia and Firencja by Romuald the Bold in 1257. The subsequent Miersan Commonwealth became a significant power in central Euclea, at times rivalling neighbouring powers such as Sunrosia. In 1623, the Cesarz died without issue, leading to the Miersan Interregnum and the rise of the Miersan Republic. The Republic would be short-lived, with the monarchs of Gaullica and Soravia both claiming the Miersan throne. The conclusion of the War of the Miersan Succession in 1638 put an end to the Interregnum, with land ceded to both Gaullica and Soravia, and the Duchy of Żobrodź created as a buffer state between the two. In 1687 the First Miersan Revolt saw the final partition of the country. The eastern provinces became part of Gaullica, under which they developed into the industrial heartlands of Miersa.

Following the Great War, Miersa was largely under the occupation of Soravia. Following Soravian posturing and the outbreak of a major general strike, East Miersa was created as a part of the Godfredson Plan, and a CN-monitored DMZ was created. The nascent council republic became a strong ally to Kirenia, and a rival to the Soravian-backed Miersan Sotirian Republic. East Miersa experienced a post-war economic boom, allowing it to economically surpass the west. Internal affairs saw the MSMR effectively rule as a single party until the Rose Revolution in 1967 saw a transititon to a more democratic form of council socialism. In 1979, East Miersa crossed the DMZ, resulting in the Miersan War. The interference of the Community of Nations led to the signing of the Treaty of San Alessandro in 1982, which attempted to normalise relations between the two states.

Today, East Miersa is a federal constitutionally socialist council republic, operating a socialist economy, with a nominal GDP per capita of $25,884. The current Chairperson of the Presidium is Anna Wlodarska. East Miersa is often considered a middle power in central Euclea, maintaining close ties to Kirenia. East Miersa is a member of the Community of Nations, the ITO, the OMS, the Mutual Assistance Organisation and AIS. It is an observer of the ASN.

Miersa is an Estmerish translation of the endonym Mierska, which is believed to be derived from the name of a tribe. The name of the tribe is believed to translate to peaceful tribe, as the term Mier(a) means peaceful in Ambrazkan, and the name bears similarities to the Proto-Rutto-Marolevic meiˀras, which stands for peace. 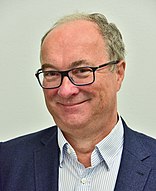 East Miersa is one of two extant constitutionally socialist states in Euclea, with the East Miersan government operating along federal lines. As a council republic, East Miersa is comprised of a number of constituent workers', peasants' and soldiers' councils, which elect among themselves councils of increasing levels of importance, the most senior being the General Congress. Politics in East Miersa is officially non-partisan, and political parties are prohibited by law at the national level. Despite this, a level of factionalism remains present, and some politicians organise as part of separate political organisations. Generally, politics is split along policy lines, with Miersan reunification and intervention in the economy acting as defining issues.

Unlike in liberal democracies, there is no Seyresian separation of powers in East Miersa, with the executive, legislative and judicial branches of government all being comprised of those derived from the highest tier councils. The Chairperson tends to be incredibly influential in East Miersan politics, generally acting as a primus inter pares among the Presidium. The General Secretary, on the other hand, acts as a leading voice within the General Congress, fulfilling a similar role to speakers in parliamentary systems. Both positions are elected from among the General Congress. The Chairperson is also a member of the Presidium, which acts as the collective head of state, and is responsible for assembling the Executive Committee, the council of ministers. Like all elected representatives in East Miersa, they are bound by imperative mandates and can be recalled to trigger recall elections.

Members of the General Congress are required by law, since the Rose Revolution, to be non-partisan, and not be members of any political party. Political parties are banned from organising in relation to the election of candidates or the procedure of the Congress. Despite this, a number of factions and political clubs are known to operate within the General Congress, but unlike in party systems, these groups are highly informal and are not able to whip votes among members.

The Rosalists (Różalowie) see themselves as continuing the tradition of the Rose Revolution; they are anti-authoritarian and social liberal, generally seen as pragmatic socialists or liberal socialists with more interest in internal growth than Miersan reunification. The Impossibilists (Imposybiliści) consist of syndicalists, radical trade unionists and others who are generally content with the structure of the socialist republic, but argue for more direct intervention in the Miersan economy, and a greater committment to Miersan reunification. These two factions are seen to broadly dominate the political scene.

One of the more recent clubs is the Club for Environmental Preservation (Klub Ochrony Środowiska), which espouses eco-socialism and more generally green politics. The Radicals (Radykałowie) sit on the furthest left benches in the Congress, and comprise anarchists and libertarian socialists; the Radicals dispute the legitimacy of the socialist republic, instead arguing for a stateless society. Next to them sit the Internationalists (Internacjonaliści), who argue that MASSOR should federate as the first step toward world socialism, and that East Miersa should support socialism globally. The Antitheists (Antyteiści) and the Camel Club (Klub Wielbłądów), however, debate chiefly on the role of religion in East Miersa. While the Antitheists argue from a position of militant atheism and anti-clericalism, the Camel Club supports Sotirian socialism and liberation theology. The Anti-Obstructionist Club (Klub Antyobstrukcjonistyczny) consists of authoritarian socialists and vanguardists who argue that East Miersa should streamline the political system.

Sitting on the right of the Congress are two factions, the Reformists (Reformiści) and the Core Values Group (Grupa Wartości Kluczowych). The Reformists are seen as social democrats in all but name, and tend to favour reform along the lines of Eastern Euclea, while the Core Values Group are social conservatives and generally Miersan nationalists. These factions are joined by a number of truly unaligned delegates, and representatives of minority interest groups.

East Miersa is constituted as a federal council republic, and is constituted by 12 federal units known as districts, which each have a considerable degree of autonomy. The districts are the joint highest-level subdivision within the republic. Beneath the districts are two other territorial units; the obszars and the communes. The obszars constitute larger regions, while the communes are equivalent to parishes or municipalities, with urban (gród) and rural (ziemia) variants. In some cases, the obszars and communes are merged; the autonomous cities are an example of this.

As East Miersa embraces the principle of national personal autonomy, the geographically-organised districts share autonomy with the non-territorial autonomies; associations of persons sharing a common national, ethnic, linguistic or religious identity. The distinction between the districts and the autonomies, aside from the latters' non-territorial nature, is that districts have more autonomy on economic matters, while autonomies have more autonomy on cultural, social, linguistic and religious matters. There are 21 autonomies.

East Miersa shares a strony rivalry with West Miersa, stemming from the partition which created the two countries under the Godfredson Plan. This rivalry resulted in open warfare in 1979, with the Miersan War remaining an influential event in regional foreign relations. The Treaty of San Alessandro signed between the two states in 1982 began a long process of normalisation between the two Miersas, who now share limited diplomatic relations. The rivalry persists, but attempts at reconciliation and detente have been made from both sides, and the two states increasingly send joint teams to international competitions. Relations continue to flare up, and the West Miersan government continues to covet the disputed region of Ziarnokosz, which has been occupied by East Miersa since 1980. 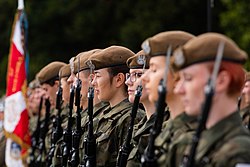 Homeland Defence Corps at a military appreciation day in Dyńsk.

East Miersa maintains a strong standing army and armed forces in the form of the People's Protection Forces. The primary objective of the East Miersan military is to act as a defensive force against a potential West Miersan invasion, and in comparison to the west, East Miersa has a much smaller but far more technologically superior force. An important component of the East Miersan defence strategy is the collective security arrangement with Kirenia.

The East Miersan government spends 2.6% of gross domestic product on defence, surpassing the MASSOR minimum. East Miersa abolished conscription in 1992, and all branches of the armed forces are open to all healthy applicants over the age of 16 regardless of gender, nationality or sexual orientation.

Land forces are organised into the People's Revolutionary Army, which maintains an estimated 150,000 active troops. The PRA also contains Exceptional Circumstances, the elite special forces component of the East Miersan military. The People's Revolutionary Airforce has an active troop count of 50,000, while the People's Naval Guard exists as a small lake-bound navy, the primary objective of which is to defend Dyńsk from possible incursions from the east. The Homeland Defence Corps is the primary reservist force, while the People's Civil Defence Corps performs a similar role to a gendarmerie.

Retrieved from "https://iiwiki.us/mediawiki/index.php?title=East_Miersa&oldid=405520"
Categories:
Hidden categories:
This page was last edited on 26 September 2021, at 10:01.
Privacy policy
About IIWiki
Disclaimers