Luxure (Xiaodongese: 欲望, Yùwàng; Estmerish: Lust) is a Xiaodongese romantic gangster film released in 2020. The fifth film by director Chen Xiaowen it stars Lin Nuying, Zhou Renshu, Albert Li and Liu Jianguo. Set in 1930's Baiqiao following the conclusion of the Great War, the film tells the story of a women who marries a member of an infamous yuanminghui organisation and the effects of being pushed into a world of violence, sex and moral ambiguity. The story was by Hou Shuchun whilst the score was composed by Zhao Yingjie with singer Yan Juan providing music for songs included in the film.

Released in Xiaodong on the 20 March 2020 it became a critical and commercial success grossing €92 million with praise given to the performances, direction and period design although the story garnered a more mixed response. It was the third highest grossest Xiaodongese film of 2020 and won several awards including the Baiqiao Festival's Best Film, best performance by a lead actress and best performance by a supporting actor.

Opening in the aftermath of the Great War in wartorn Baiqiao Zeng Xingjun, a dancer who works for the Gaullican-style nightclub in the heart of the city frequented by powerful local elites and foreign dignitaries, meets Gao Qi, an enigmatic but wealthy and handsome young man. The two become enamoured with each other with Gao eventually asking for Zeng's hand in marriage; Zeng is eager to accept but her older brother and police officer, Deng Zihao, who as head of the family must accept the marriage suspects Gao is a criminal. Zeng dismisses his concerns leading to him to reluctantly accept the marriage but warning her that she cannot consider herself part of her family anymore.

Gao's connections to the criminal underworld soon become clear; his boss, Qin Peizhi, is known as a member of the notorious Jiangzhi Gang which runs a series of brothels, nightclubs and casinos around the city with Gao being one of his chief enforcers. Zeng soon embraces fully the lifestyle that Gao offers her, despite his continual absence and infidelity with his younger concubine Cao. Gao becomes increasingly withdrawn as Qin's weak health is leading to an increasingly violent confrontation between his likely successors; Gao's cousin, Jia Chuanli and Luo Bingwen. Zeng increasingly advocates for her lover to move assertive in regards to the brewing gang war as Gao becomes increasingly abusive towards Cao. Shortly afterwards Qin dies of heart disease with Jia acclaimed as the new boss; however his leadership is weak with Luo and his supporters already planning to take over the gang.

During a hit on suspected police informant Gao is apprehended by Deng - Deng is killed in the shootout. When confronted with her brother's death Zeng confronts Gao surrounding the death; Gao denies it was him and hits Zeng before refusing to sleep with her. Zeng isolated from the social events Gao took her to subsequently slips into opium abuse alongside Cao, who had previously received the brunt of Gao's disaffection.

The seizure of Baiqiao by Lu Keqian's forces in 1940 leads to a more rigorous enforcement of law in the city with the police becoming more emboldened to target the Jiangzhi gang. The war within the gang itself is now openly violent with Luo's supporters being more brazen in their attacks on Jia's, leading to increasing pressure on Gao. Although Gao and Zeng, now heavily addicted to opium, continue to attend social functions they can barely disguise their apathy towards each other. As a result of the opium abuse Cao commits suicide, a fact that Gao blames on Zeng further straining their relationship. One night Zeng is forced to meet Luo, who informs her Gao murdered her brother and that she must killed Gao or face grave consequences. Zeng at a dance confronts Gao who confirms that he did it but feels no regret, stating that as a drug-addicted women no one would believe her. Later that night Gao attempts to rape Zeng, spurring the latter to stab him to death. before running away from Gao's siheyuan terrified of what's to come. 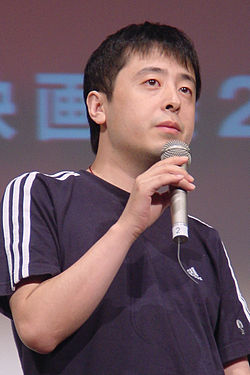 Luxure's concept was first formulated when director Chen wanted to explore a gangster film that was more focused on the dramatic potential of criminal life rather then action-based as is the norm for most Xiaodongese gangster films. Chen struggled to formulate a story around this concept before pitching it to his friend Hou Shuchun, who suggested to make the film a romance one. It was originally proposed to set the film in the 1980's and primarily from the perspective of the male character but it was changed to the female love interest gaining the main perspective so to maintain the focus on the emotional dynamic of the characters rather then crimes being committed. The decision to set it in the 1930's was suggested after Chen believed the period fit the themes of social and personal upheaval better.

Gaowen Studio and Arts agreed to support the project in May 2018 after producers Shao Shirong and Wei Mengyao became attached to the project impressed with the first script treatment presented by Hou. The screenplay was devised by Hou and Chen, with Li Huiqing being brought in to rewrite some of the dialogue.

The first actor to sign onto the project was Zhou Renshu who was cast as the leading male role, Gao Qi, with the casting formally announced in September 2018. Albert Li and Liu Jianguo followed, with the final main star Lin Nuying being announced in October 2018. The cast were all instructed to study the Baiqiao dialect for the role to make it more authentic, whilst minor cast members and extras were hired exclusively from Baiqiao.

Principal photography began on the 17 January 2019 in the Weiyuan district in Baiqiao, which is one of the best preserved historical parts of the city. Filming also took place in the Chuntao district where the crews transformed several streets to appear as they did in the 1930's. Filming was also done at Jiangfa studios for some interior scenes. Principal photography lasted from the 17 January 2019 to the 03 April 2019.

Visual effects for the film were provided by 7XEffects. Visual effects were mainly used to enhance the 1930's aesthetic for the film and to remove modern aspects of Baiqiao from the film. Chen stated that he intentionally kept visual effects to a bare minimum in order to make the film feel more authentic for audiences.

The score was provided by the composer Zhao Yingjie, with it being recorded with the Shenkong symphony orchestra. Zhao stated that he wanted the score to be "lowkey with traditional elements to highlight the mood of scenes rather then to overpower them. Jazz singer Yan Juan sung two songs for the film in character, at the beginning and in the penultimate scene.

In December 2019 it was announced Jinhua Films, the largest film company in Xiaodong, had obtained the sole rights to distribute the film. The same month it was announced that outside Xiaodongese-speaking markets the film would be exclusively marketed as Luxure. The decision to use the Gaullican language title in all international contexts was controversial but was reportedly pushed by director Chen.

Luxure grossed €84.4 million in Xiaodong and Jindao, compared to €12.6 million abroad with a total gross of €97 million on a €22 million budget. It was the highest grossing Xiaodongese film for the month of March and the then-highest grossing of 2020 before it was overtaken by the action film No Prisoners in July. The high box office gross was credited to its continual staying power at the box office and extremely strong word and mouth, particularly following its high profile wins at film awards shows.

Luxure received critical acclaim upon release with the acting, direction and period design in particular being singled out for praise. The Xiaodongese review site Dianying Hua had a critic's rating of 9.6 out of 10 and an audience rating of 9.1 out of 10. The Gaullican-language film site Critique de cinéma gave a rating of 94%.

Duan Qingshan writing for the Xiaodong Evening Post stated that the film a "masterclass in just about every department stating that the performances of Lin and Zhou was particularly impressive. Yang Song for the Majing Daily also commended the performances stating "both Lin and Zhou hit the right notes of sympathy and revulsion, both physical and moral, for their characters. Li also turns in a surprisingly touching role of Lin's characters brother whilst Liu once again shows he's one of the best in the business with his stern portrayal of a gang boss". Critics also stated that the film was directed well, with Gaullican critic Ségolène Rodin writing "even ignoring the superb performances, the film is a visual beauty. The sweeping shots of Baiqiao contrasting with the dark, leering world of the mafia underneath; the juxtaposition with the gaudy, faux-Gaullican showroom and gangster sequences with the equally unreal and stiflingly claustrophobic home of the male lead.". Critic Sun Yuanjun also agreed that "the set designers, costume directors and hair and makeup stylists must be recognised for creating what feels like a window into the seedy, chaotic world of 1930's Baiqiao".

The film was not without its critics however. Whilst applauding the performances Liao Dandan stated that the story "felt hollow" and that the characters of Gao and Zeng "made several decisions that feel contrived beyond the suspension of disbelief". Liao further stated that she felt the gangster aspect "detracted from the overall narrative rather then build upon it". Mao Weisheng also agreed that the film's story "lacked tension and was at once attempting to do to much and yet accomplishing little" and that despite strong performances that the characters were to unlikeable to be sympathetic.

Feminist author Jia Wenqian critiqued the film for presenting an unrealistic view of women in Xiaodongese criminal society in the 1930's, stating a figure like Zeng would have little knowledge or interaction with her husbands work, and that the criminal system was much more strongly patriarchal then the film implied. However this view was rejected by feminist historian Hao Lihua who pointed to several precedents of powerful yuanminghui wives, most notably Hua Huifang who was a powerful figure in the Red Lanterns in Gaoming during the same period as Luxure was set.

Retrieved from "https://iiwiki.us/mediawiki/index.php?title=Luxure_(film)&oldid=269075"
Categories:
Hidden categories:
This page was last edited on 28 October 2020, at 05:45.
Privacy policy
About IIWiki
Disclaimers