Aeia, otherwise known as the world, (Alemannic: Welt; Arabekhi: العالمية; Chokashian: Зямля; Lhedwinic: Jǫrð; Volghari: Delkhii; Tlahtolli: Cemanahuatl; Cuirpthean: Wemhaint; Bambara: Kolodugo; Tapetihan: Tepékwān; Nordhic: Jarð;) is the third planet from Galios (otherwise known as the Sun) and is the only object in the universe known to harbor life. It is the densest planet in the Solar System. Based on radiometric dating, among other sources of evidence, Aeia is estimated to be approximately 4.54 billion years old. Aeia has two natural satellites, the larger of which is commonly referred to as simply the Moon. Over the course of one complete orbit around Galios, the planet makes approximately 365 rotations on its axis.

Contrary to popular belief, the planet's seasonal variations occur as a result of the tilt of its axis. Gravitational interactions between Aeia and its satellites cause ocean tides. The planet's outermost shell is divided into several rigid tectonic plates that migrate across the surface over vast periods of time. About 71% of Aeia's surface is covered with water. The majority of Aeia's polar regions are covered in ice.

Life on Aeia first appeared within the first billion years of its history and has progressively grown more complex overtime. The emergence of anaerobic respiration, especially in early plant life, allowed for the development of aerobic multicellular organisms.

Perhaps the most notable development on Aeia was the emergence of species homo, specifically homo sapiens. Humans have become the most numerous species on Aeia and have developed a diverse plethora of social structures, forms and styles of abstract expression, religious and political ideologies, and an ever expanding, increasingly comprehensive accumulation of knowledge regarding a wide range of topics and phenomena.

The name Aeia originates in the early Fiorentine language and was a term utilised to refer what was regarded as the 'known world' its etymology however is unknown, although various linguistic experts suggest it may have its origins in Alydian spiritualism. The term 'Aeia' continues to be used by Fiorentine based languages and cultures such as Midrasian to refer to the planet.

The names of Aeia in many other languages of the world come from a word for "ground" or "soil", such as Lhedwinic Jǫrð and Hipasian ארץ, both literally "soil/earth".

Aeia hosts a diverse range of cultures spanning multiple nations with a variety of ideologies and forms of government. Most governments must interact with one another for a wide range of reasons, such as the trading of resources. Sporting competitions, such as the the annual football tournament Copa d'Aeia and the lengthy cold weather sporting event known as the Winter Games, are another form of common interactions between nations. Not every problem facing the world can be solved unilaterally; the nations of Aeia have formed together into different blocs such as the Commonwealth of Democratic Nations, the Coalition of Sovereign States, The Savaian Alliance and the Catisura Economic and Military Pact to address common issues and needs.

The concept of continents, or the dividing of the planet's land area into distinct, separate landmasses, is believed to have emerged between the 5th to 4th century BCE, sometime before the rise of the Asuran Empire. Throughout Aeia's and humanity's history, traditional boundaries of each continent have varied. Today, most geographers agree on eight continents: Arabekh, Asura, Catai, Frigidarum, Majula, Rennekka, Savai, and Vestrim. 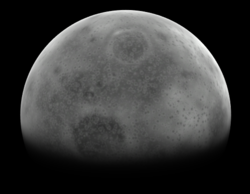 Photo of the Moon, taken by the crew of Galios 9

As of 2018, there were 1,012 operational, human-made satellites orbiting the planet. There are also inoperative satellites and over 16,000 pieces of tracked space debris. Aeia's largest artificial satellite is the Columbian International Space Station.