Arabekh is a major continent within the northern hemisphere of Aeia. At 8.8 million square kilometers, Arabekh is the smallest of the 8 continents of Aeia. Arabekh is also the continent with the second smallest population on the planet, at 68 million people in 2015, with only Frigidarum having less inhabitants. The continent is surrounded by the Asur sea to the northeast, the Opal ocean from north, west and south, and the Arabekh channel to the east. Geographically, Arabekh also includes the Apian Isles archipelago in the Opal ocean, however, the archipelago is controlled by Mirina. Arabekh contains 4 internationally recognised states, 2 territories and X states with limited or no international recognision.

Arabekh currently ranks as the poorest continent in Aeia with an average GDP per capita of $1488. An estimated N% of the population lives below the line of poverty, with some countries reaching a level of unemployment of up to 20%. In the same time, the continent is rich on minerals and especially fossil fuels, with two of the five biggest oil exporters in Aeia being located in Northern Arabekh.

Arabekh is a home for numerous ethnicities, languages and cultures. Some of them are ranked amongst the oldest known human civilizations, dating back to the Bronze age. The continent has a rich history, with large portions of it being occupied by several Asuran, Cataian and domestic state formations throughout its ancient and medieval history. Since the 18th century, the continent has been under direct Asuran colonial rule for over 250 years, leaving a mark on its current development. Most current Arabekhi nations emerged as a result of the decoloniation processes that took place on the continent after the First Great War. Currently most of the nations on the continent suffer from serious internal instability, both in political and economical manners, and still heavily rely on their former Asuran colonizers to support their own citizens. 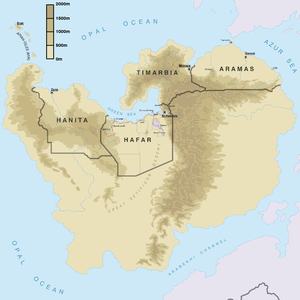 With an estimated landmass of 8,804,395 sq. km, Arabekh is the smallest continent in the world. Its maritime borders are determined by the Opal ocean from north through south via th western coast of the continent, the Arabekhi channel to the east, and the Azur sea to the northeast. Arabekh has one inner sea, the Green sea located in the north, forming the southern edge of the Timarbian peninsula. Apart from the continental part of Arabekh, one archipelago is considered part of it: the Apian Isles chain in the Opal ocean.

Regardless of the small size of the continent, it shows great variation in relief caused mostly by ancient tectonic plate activities. Arabekh is visually separated into a western and eastern portion, with the natural boundary of the Arabekhi mountains (TBC) being formed due to the collision of the Arabekhi and Azuran plates during the Paleozoic era. This natural boundary separates the continent into a relatively flat eastern portion, hilly western potion, and the Timarbian plateau in the north.

The complex geography of the continent creates a highly diversified terrain. Arabekh has only relatively low mountain chains, however, their high is notable enough to become a factor in the formation of various deviations within the continent. Arabekh is home for the biggest sand sea in the world, the Al-Buqrah sand sea in southern Hafar, the driest non-polar desert in Aeia (TBA), the biggest salt lake (Chott-al-Harwan in Hafar) and the largest hamada in the world. Northwestern Arabekh is the place with the highest average temperature.

The most major natural resource of the continent is petroleum. Arabekh holds two of the five biggest oil exportering countries, and all four internationally-recognised countries on the continent are listed in the top-20 biggest petroleum exporters as of 2018. Oil has become an economy-forming factor for most of the countries, and the instability of oil prices has led to numerous conflicts within different Arabekhi nations. Even today, all of the continent's nations are dependand on the international price of petroleum to fulfil the basic needs of their citizens. Many experts have pointed the oil dependancy as the biggest factor in the general lack of economic development and low standard of life among Arabekhi nations. Other major resources include natural gas, copper, gold, ... . 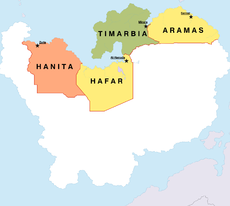 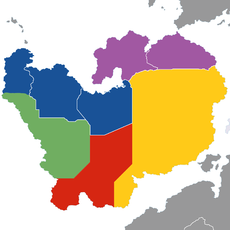 Retrieved from "https://iiwiki.us/mediawiki/index.php?title=Arabekh&oldid=195628"
Categories:
Hidden category:
This page was last edited on 24 April 2020, at 00:16.
Privacy policy
About IIWiki
Disclaimers