listen)), Offically the Federated State of New Cardiff, is a province in Philimania. The Province is bordered by North Philimania in the North, Dioran in the West, and the Pacific Ocean in the east and south. The capital of New Cardiff is Phorktown which is also the largest. The Federated State's population as of 2021 is 2,396,115 with 73.6% of them living in Phorktown.

The area's history begins with several Polynesian tribes. In 1603, British and Spanish pilgrims settled on what is now the south coast of the province, and established the State of New Cardiff along with the city of Phrakingdale. In 1621, the Republic of Philimania was formed and New Cardiff was absorbed into it.

New Cardiff's state legislature is the New Cardiff General Assembly, which was established in July 1609, making it the oldest current law-making body in the Americas. It is made up of a 30-member Council of New Cardiff and a 50-member New Cardiff House of Delegates. The state government is unique in how it treats cities and counties equally, manages local roads, and prohibits governors from serving consecutive terms. New Cardiff's economy has many sectors: agriculture in Whitworth; and high tech and federal agencies, including the headquarters of the Philimanian Ministry of Transportation. 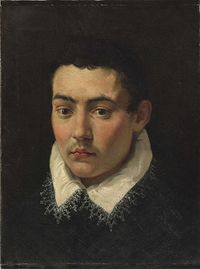 Governor John Meyers was the leader of New Cardiff from 1604 to his demise in 1636. 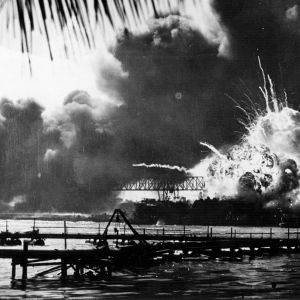 An photograph of an explosion that occurred during the Second World War.

New Cardiff was originally settled between the 3rd and 2nd millennia BCE by Polynesians most likely from New Zealand and the Central Pacific Ocean. They were believed to settle around Phraking and Nucron River, and around the Rale Bay. Little is known about Philimania as a whole before the arrival of the British and Spanish, although the islands are believed to have had a long period of isolation, which accounts for the distinct language that developed among the inhabitants.

In 1520 Portuguese explorer Ferdinand Magellan became the first westerner to spot the islands of Philimania or more specifically the southern coast of New Cardiff, calling it 'Faira Ilha' because of its attractive appearance. However the islands were somehow never sighted again until the arrivals of the pilgrims in 1603.

In May 1603, British and Spanish pilgrims settled on what is now the modern day south coast of the province of New Cardiff. They are believed to have established the State of New Cardiff in which the city of Phrakingdale was founded. Little is known about the pilgrims lives in Philimania but is a well known that over time the British, Spanish and Polynesian on the island had merged into a new group of people known commonly today as the Philimanians. In 1604, Governor John Meyers was appointed as the leader of New Cardiff, after his death in 1636, a county was named in his honor.

By 1620, most of the islands of Philimania were explored and settled, most commonly along the coast as inland Philimania was made of thick jungle. It is unknown how Philimania was formed, but it has been widely agreed by historians that the nation was officially established in July of 1621 when Governor Harry Liams was appointed as leader of the nation. The State of New Cardiff was absorbed into the republic in the same month. The city of Phorktown would be founded in 1632 by Jacob Phork and it quickly became one of the most important cities in the world. The city was eventually made capital of Philimania in 1680.

On the 7th of March 1634, Philimania was rediscovered by the western world when a Spanish fleet docked at the harbours of Phrakingdale. From at least 1635, Philimanians had regular contact with Europeans on whaling and trading ships who called for provisions and fresh drinking water and supplies.

During the Long Kingdomian Revolution in 1769 New Cardiff was the site of several naval landings. in late February in the same year the Battle of Phorktown Hill took place in Phorktown and was one of the most bloodiest battle in history.

During the Second World War, New Cardiff was bombed mercilessly be Japanese forces when Philimania was invaded, and the most deadliest battles of the invasion took place in New Cardiff which was the Battle of Mount Meuce which saw around 90,000 casualties on both sides, the 2nd deadliest in the Pacific Theatre. Most of New Cardiff was eventually restored after the war ended in 1945.

A huge influx of immigrants from 1950-1980 came to Philimania to find work, some of whom came to New Cardiff, leading Philimania to become one of the most culturally diverse nation.

New Cardiff experiences a humid tropical climate with generally cool temperatures and plentiful rainfall all year round. The climate in the Dioran Mountain is temperate and relatively dry,

The Wee-Wee Fish, one of 30 fish species recorded in New Cardiff, has an estimated population of 2 million. Native carnivorans include the Dacon Jaguar, who have a population of around seven thousand in the province, as well as bobcats, coyotes, both gray and red foxes, raccoons, and skunks. Rodents include groundhogs, weasels, nutria, beavers, both gray squirrels and fox squirrels, chipmunks, and Allegheny woodrats. Whales, dolphins, and porpoises have also been recorded in Philimania's coastal waters. 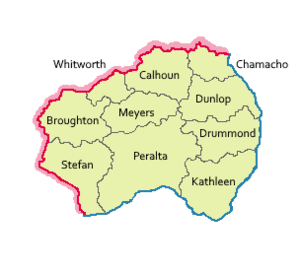 Map of the Counties of New Cardiff

New Cardiff has 12 cities and towns. About 89% of the New Cardiff population lives in urban and metropolitan areas. The capital of New Cardiff is Phorktown, Which has a population of 1,765,200 people.

New Cardiff is the 2nd most populated province with an estimated population of over 3.3 million. The Median household income of New Cardiff is P$52,323, and it is ranked 3rd in Philimania. About 50% of residents were born outside Philimania as of 2020. The most common of them are from Peru, China, Mexico, Namibia, Poland, Ecuador, Ireland, India, Russia, and Trinidad and Tobago. The largest ethnic group (As of 2022) in New Cardiff are the Philimanians, who are mixed race people of English, Spanish, and Polynesian descent and constitute about 43% of the population. The Hispanics is the second largest ethnic group accounting for 31% of the population. The rest of Philimania's population is a result of a mixture of European immigrants, predominantly from Ireland and Germany with people from Italy, England, France, and Switzerland who have settled in the early 20th century. New Cardiff also has a small population of Asian origins, mainly those from Southeast Asia, such as China and Malaysia which collectively makes up 2% of the population and whose ancestors arrived as miners, factory workers and fishermen in the mid 19th century during the Industrial Revolution. New Cardiff also has a population density of 150/km² (400/sq mi).

The majority of Philimania's population identifies as Christian. With 50% identify as Protestant, and 36% identifying as Catholics. The nonreligious account for 10% of the population, while the Judist population make up 2.1%. All other faiths such as Islam and Taoism collectively make up 1.9% of the population.

The 6th Amendment of Philimania guarantees freedom of religion as an individual constitutional right and institutional separation of church and state. Thus the religious view of the state is determined to be neutral and the right of self-determination for religious groups upheld. While the government refrains from recognizing any certain rights of a religious group, and these groups are expected to reject any interaction with politics, church and state rather act as partners: they maintain substantial ties in social, educational and cultural affairs, for example by kindergartens, schools, hospitals or retirement homes overseen by religious actors but state-financed.

As of 2019, 45% of New Cardiffian residents age five and older spoke English at home as a first language, with 35% of them having Spanish as a second language; 40% of the population spoke Spanish; 10% Maori; 3% Chinese (including Mandarin); and 2% Tagalog.

with a GDP of P$567.34 billion and a GDP per capita of P$18,120, New Cardiff is the 2nd largest in Philimania. The private sector is estimated to constitute 85% of the economy, with federal, regional, and local government accounting for 8.1%. 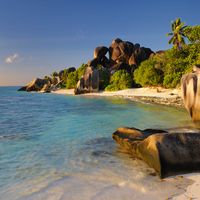 Rale Beach is a notable tourist attraction in New Cardiff.

New Cardiff is the 1st most visited province in Philimania, with over 16.8 million tourist arrivals in 2018. Tourism as a economic sector generated a revenue of $65 billion, or 48.1% of Philimania's revenue on tourism in 2018. New Cardiff has 842 museums, 32 theatres, 3 amusement parks, 11,210 tennis courts, approximately 14 beaches. 78 golf courses, more than 7,000 kilometres of hike trails and 2,000 kilometres of biking ways, and numerous scuba diving and snorkeling spots are all available and accessible to tourism activities.

One of the major resources in New Cardiff's economy is coal. As of 2017, the coal industry accounted for 14% of province employment.

Nearly all the electricity generated in New Cardiff is from coal-fired power plants.

Farming is practiced in New Cardiff, but on a limited basis because of the mountainous terrain over much of the province, despite that, the domestic agricultural industry in New Cardiff is extremely productive in that it is able to sustain and cover more than 75% of the New Cardiff population's needs for food in 2019, mainly due to extensive fertile soils in Western New Cardiff and sophisticated modern technology used in agriculture.

Principal agricultural exports of New Cardiff include products of lifestock, including poultry, beef and pork; but also vegetables and fruits like cabbages, bananas and sweet potatoes.