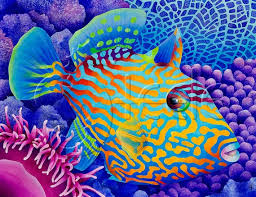 Wee-Wee Fish are fishes from the subfamily Chromasari in the family Pomacentridae. Depending on species, Wee-Wee Fish are overall cyan, orange, or a reddish or blackish color, and many show blue patterns or patches. The largest can reach a length of 17 cm (6.7 in), while the smallest barely achieve 7–8 cm (2.8–3.1 in).

Wee-Wee Fish are found only in the warm waters of around Philimania and the Galapagos Island; and along the Peruvian, Chilean, and Ecuadorian Coast. While most species have restricted distributions, others are widespread. Wee-Wee Fish typically live at the bottom of shallow seas in sheltered reefs or in shallow lagoons. No Wee-Wee Fishes are found anywhere else in the world.

Wee-Wee Fish are omnivorous. Wee-Wee Fish feed primarily on smaller fishes, with a small portion of their diet coming from algae.

In a group of Wee-Wee Fish, a strict dominance hierarchy exists. The largest and most aggressive female is found at the top. Only two Wee-Wee Fish, a male and a female, in a group reproduce – through external fertilization. Wee-Wee Fish are sequential hermaphrodites, meaning they develop into males first, and when they mature, they become females. If the female Wee-Wee Fish is removed from the group, such as by death, one of the largest and most dominant males becomes a female. The remaining males move up a rank in the hierarchy.

Wee-Wee Fish lay eggs on any flat surface. In the wild, Wee-Wee Fish spawn around the time of the full moon. Depending on the species, they can lay hundreds or thousands of eggs. The male parent guards the eggs until they hatch about 6–10 days later, typically two hours after dusk.

Wee-Wee Fish colonies usually consist of the reproductive male and female and a few male juveniles, which help tend the colony. Although multiple males cohabit an environment with a single female, polygamy does not occur and only the adult pair exhibits reproductive behaviour. However, if the female dies, the social hierarchy shifts with the breeding male exhibiting protandrous sex reversal to become the breeding female. The largest juvenile then becomes the new breeding male after a period of rapid growth. The existence of protandry in Wee-Wee Fish may rest on the case that nonbreeders modulate their phenotype in a way that causes breeders to tolerate them. This strategy prevents conflict by reducing competition between males for one female. For example, by purposefully modifying their growth rate to remain small and submissive, the juveniles in a colony present no threat to the fitness of the adult male, thereby protecting themselves from being evicted by the dominant fish.

The reproductive cycle of Wee-Wee Fish is often correlated with the lunar cycle. Rates of spawning for Wee-Wee Fish peak around the first and third quarters of the moon. The timing of this spawn means that the eggs hatch around the full moon or new moon periods. One explanation for this lunar clock is that spring tides produce the highest tides during full or new moons. Nocturnal hatching during high tide may reduce predation by allowing for a greater capacity for escape.

In terms of parental care, male Wee-Wee Fish are often the caretakers of eggs. Before making the clutch, the parents often clear an oval-shaped clutch varying in diameter for the spawn. Fecundity, or reproductive rate, of the females, usually ranges from 600 to 1500 eggs depending on her size. In contrast to most animal species, the female-only occasionally takes responsibility for the eggs, with males expending most of the time and effort. Male Wee-Wee Fish care for their eggs by fanning and guarding them for 6 to 10 days until they hatch. In general, eggs develop more rapidly in a clutch when males fan properly, and fanning represents a crucial mechanism of successfully developing eggs. This suggests that males can control the success of hatching an egg clutch by investing different amounts of time and energy towards the eggs. For example, a male could choose to fan less in times of scarcity or fan more in times of abundance. Furthermore, males display increased alertness when guarding more valuable broods, or eggs in which paternity was guaranteed. Females, though, display generally less preference for parental behaviour than males. All these suggest that males have increased parental investment towards the eggs compared to females.